However, in these days of angry mobs and random terrorist attacks, the standard capacity of a .45 doesn’t make me feel so warm and fuzzy. With a “normal” capacity of 7+1, it carries half as many rounds as a double-stack 9mm. It’s easy to find a wonder nine that packs 15+1 and many, like the new Smith & Wesson 2.0 models, stuff 17+1 into a surprisingly compact package. Yeah, I know, .45 rounds are huge, and each one is capable of leveling an entire city block, but magazines can leak amazingly fast when things go bad.

If you’re into big bore calibers, one alternative is to consider a double, or more accurately, one and a half stack polymer .45 like the new Smith & Wesson M&P 45 2.0. This one stuffs ten rounds of .45 into the magazine plus an extra in the chamber. So, if you carry a spare magazine, you’re looking at 21 rounds of total carry capacity. That’s not too shabby and works out to six more than a standard 1911 and spare magazine configuration.

The M&P 45 2.0 sports a 4.6-inch barrel with a 1:15-inch twist rate. That barrel length equates to a 7.9-inch overall length, almost an inch shorter and 11 ounces lighter than an SW1911 government size. As a different comparison, this size and weight put it in the same class as the 9mm Glock 17. 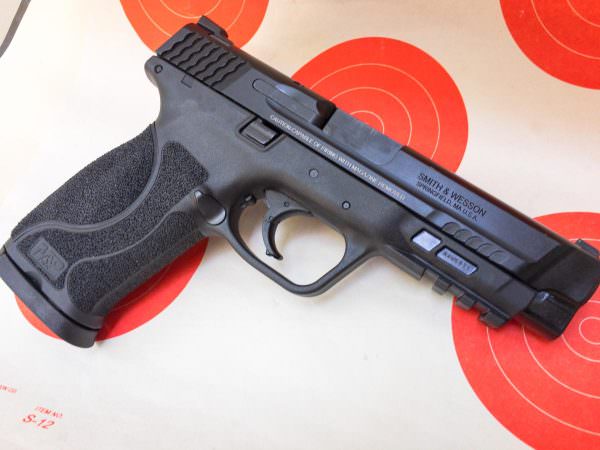 The trigger is where the significant changes from the original design are most evident. While I liked the overall feel of the 1.0 M&P series, I would have to describe the trigger as a bit on the mushy side. The new one has been completely redesigned and is much, much better. There’s a noticeably smoother take-up stage followed by a crisp break. I measured this one with a Timney Triggers gauge, and it showed exactly 5 3/4 pounds of pull weight every time.

The trigger reset is positive; you can hear and feel it. To see what I mean, dry fire, but hold the trigger back while you reset the slide. Then, slowly release the trigger until it resets. After about 1/4-inch of travel, you won’t be able to miss the reset either by feel or the audible “click.” It’s nice.

The grip size options are also new and improved. Each pistol ships with four interchangeable backstraps so you can easily tweak the grip size to fit your hand and personal preference. The pistol comes with the Medium size installed, so included in the box is one that’s smaller and two that add additional circumference. I ran a tape around the default Medium grip configuration, and the circumference measured 5 1/4 inches. For comparison, I did the same with a Springfield Armory 1911 TRP and came to about 5 1/16 inches. That gun has Crimson Trace Master Series Lasergrips installed, so the grips are a hair thicker than standard. 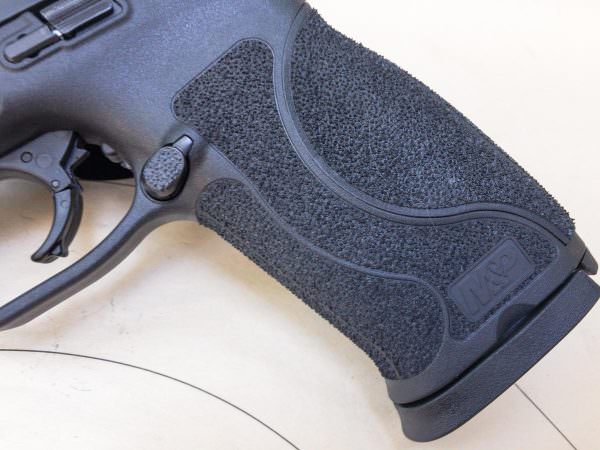 The grip texture is aggressive – this gun won’t move around while you shoot.

The texture on the new M&P 45 2.0 is much more like skateboard tape; it’s an aggressive pattern. The good news is that once anchored in your hand; it won’t move. The bad news is that if you carry inside the waistband, you’ll want to use a holster with a generous back panel or wear and undershirt to protect your skin.

Under the covers, you might notice a couple of holes in the polymer frame forward of the trigger guard. Through those, you’ll see the extended stainless steel chassis. It’s been made longer with the new models to help reduce flex of the frame. Just below that is a rail segment for attachment of lights or lasers.

The standard M&P 45 2.0 is a striker-fired pistol with no external safety. Of course, there are internal safeties like the now common trigger safety. If you prefer, you can order the M&P 45 2.0 with a manual safety option. I tried this on one of the new 9mm pistols and found it changed the feel of the trigger a bit. It was a little rougher and had a slightly detectable “shelf” that you could feel during the pull if you concentrated. So that’s the tradeoff. Also, the standard model is black, but you can order this gun in Flat Dark Earth as well. The 9mm I tried came in that finish and it looked sharp, but then again, I have a thing for that color. 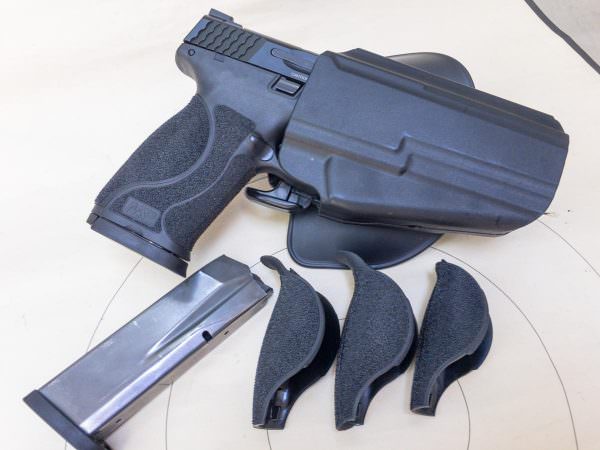 The M&P 45 2.0 worked like a champ with this Safariland 578 GLS Pro-Fit holster. It’s one of the few paddle holsters that actually stays put.

The M&P 45 2.0 is a pleasant gun to shoot. I’ve always liked the 18-degree grip angle (same as a 1911) and rounded profile. It’s a personal preference certainly, but the rounded profile tends to fit my hand better, and my shooting improves, with a more rounded grip as compared to the squared profile of a Glock. I think I just get better overall hand contact with the shape of the M&P.

I brought this pistol to the range with both included 10-round magazines and a pile of .45 ACP ammo to do both informal and accuracy shooting. I tend to like shooting .45 ACP in general, so the feel didn’t surprise me. The heavier and slower bullet, at least for me, offers recoil that feels more like a push than a snap, so I don’t consider it a heavy recoiling gun. Again, to me, it’s easier to control than something like a .40 S&W, but that’s a personal opinion.

After getting a feel for the pistol, I set up targets at 25 yards and shot multiple five-shot groups for accuracy with various brands and types of ammo. Here’s what I found.

While not a bullseye competition gun, it’s perfectly solid for carry use and puts rounds where they need to go. While most ammo types shot to the point of aim with the default factory sight placement, both front and rear sights are dovetail mounted and easily adjustable for windage. I didn’t experience enough of an elevation difference to worry about that.

All in all, it’s a nice pistol. If you want a little extra fat and slow bullet capacity, check it out. The new trigger on the 2.0 series makes all the difference. MSRP on all variants is $599, but you can find them for less on the street.