The ports on this new Smith & Wesson Performance Center Shield 45 make this pocket 45 pleasant to shoot.

USA –-(Ammoland.com)- Is that a 1911 in your pocket, or are you just… Never mind, we’ll just leave that one be. But you can have a 1911 in your pocket if you like. In fact, the one we’re looking at today packs up to 7 rounds in the magazine plus one in the chamber. That’s the same capacity as a “standard” 1911 full-size pistol. If you’re in the .45 camp that believes each round can level a city block, this is good news for you, because you can pack eight of those rounds in your pocket pistol.

Pocket .45 pistols are nothing new. Two of my favorites are the Springfield Armory XD-S and Smith & Wesson Shield. If one is not faint of heart, willing to practice, and feels the need for recoil, they’re a perfectly good carry option. They work. They launch a big fat bullet. They let you know when you torch off a round. In other words, they’ll wake you up in the morning.

Now there’s a pocket .45 that has put on its jammies and relaxed, at least in terms of shooting comfort. New from Smith & Wesson is the Ported Performance Center M&P Shield 45. As the name implies, it comes with a factory ported barrel. When you pull back the slide, you’ll see two small oblong holes drilled through the barrel. They’re located about one-half inch back from the muzzle and placed at approximately the ten and two o’clock positions. The slide has a series of three holes cut on each side. The idea is that some of the hot gas from cartridge ignition blasts out of the ports. Since this exhaust is aimed upward, the force tends to push the barrel down, thereby compensating against muzzle flip during recoil.

While the primary Performance Center customization on this pistol is the porting and associated slide cuts, there’s also an enhanced trigger in this model. I measure the weight on this sample right at 5 ½ pounds, each and every time. There’s a take-up stage with slight resistance, followed by perhaps ¼-inch of constant pressure leading to a crisp break. The trigger is noticeably better than that on the original standard M&P pistols. Like the originals, it features a hinged trigger face as a safety mechanism. Unless the hinged part of the trigger is pressed, the gun can’t fire. 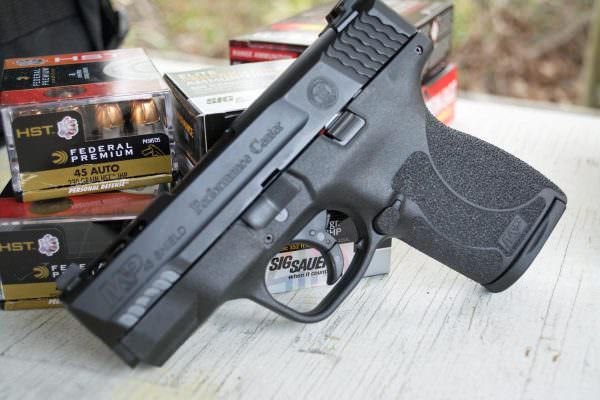 The Shield 45 shown here comes with Tritium night sights. If you prefer, you can order one with Hi-Viz fiber optic sights instead.

With the introduction of the family of M&P Shields in .45 ACP, Smith & Wesson quietly introduced one of the subtle features present in the new M&P 2.0 family – front cocking serrations. They’re not full height, but rather a short section of the trademark scalloped pattern along the bottom edge of the slide well forward of the ejection port. I think the idea is to provide a little extra grip in you like to press check with a forward slide grip, but also keep the pattern out of the way. It definitely helps you get a solid grip and won’t interfere with your holsters.

The model shown here is equipped with Tritium night sights front and rear. The MSRP on this one is $742. If you like, you can also order a version with Hi-Viz fiber optic sights. That one lists for $609. Everything else is identical between the two models.

So the Shield 45 has the same capacity as a standard 1911 assuming you use the included +1 magazine. That add a little length to the grip, but nothing significant. The pistol also ships with a flat base magazine that holds six rounds, plus the extra in the chamber. The idea of a 1911 in your pocket is cool. What gets really interesting is not only the pocket-size dimensions, but the weight. This Performance Center Shield weighs in empty at just over 22 ounces. The 1911 that I like to carry tips the scales at over 42 ounces empty. If I so chose, I could carry a New York reload, meaning another entire Shield 45 for the same approximate weight. Ah, if only dual-wielding made sense outside of Hollywood fantasies.

I’ve been shooting the Ported Performance Center Shield 45 with a variety of full-power defensive ammo, primarily the heavier 230-grain stuff. The first thing I noticed was how much of a difference the porting makes in terms of felt recoil. The ports slow down and diminish the degree of muzzle flip significantly. While recoil is recoil, the dampening of the violent muzzle jump of a pocket 45 makes felt recoil a completely different experience. The gun is not at all punishing, even when shooting defensive ammo. 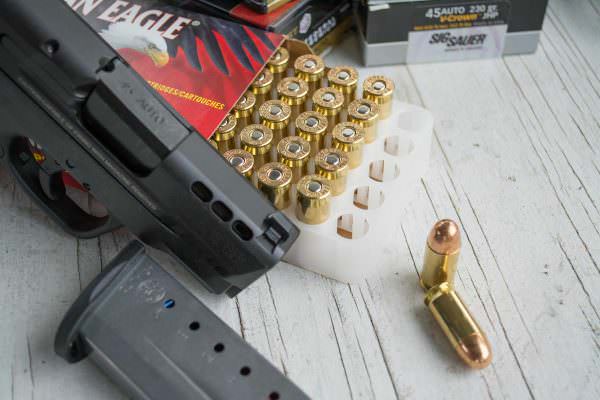 I shot this model with a variety of 230-grain .45 ACP ammo. No issues yet and the recoil is perfectly reasonable for such a small pistol.

I’ve been testing the Shield with four types of ammo, all of the 230-grain variety: Federal HST, Sig Sauer Elite Performance V-Crown, American Eagle FMJ, and American Eagle Syntech. The Shield had no function problems with any of these and didn’t seem sensitive to less than rock-solid holds. I did much of the shooting one-handed simply to get a feel for the porting effect. I did set up a chronograph to see what type of velocities came from this little pistol and recorded the following:

If you haven’t shot a Smith & Wesson M&P Shield before, be sure to try one out, in any caliber. The company makes them in 9mm, .40 S&W, and .45 ACP. It’s a great little gun that is just large enough to control well but still very easy to conceal. I suppose that’s why the company has sold over a million of them in various calibers. Now with the ported .45 ACP model, you can carry the big bore version with confidence. It’s comfortable enough to shoot that you won’t mind practicing with it at the range.