Why Do We Fight? If you listen to the internet, only one of these is capable of saving your life! Which is it???

USA –-(Ammoland.com)- It’s easy to understand why we fight like cats and dogs during election season. It’s because you’re right, and so many other people are wrong! It’s a crazy statistical anomaly, isn’t it? The odds of 59 million people being on the opposite of your position, and therefore the dumbest humans to ever walk the face of the earth have to be astronomical, right? Yet it happens! Just kidding… Well, maybe I’m not, but that’s beside the point.

But seriously, what I can’t understand is why we fight to the death amongst ourselves over the most ridiculous things. When I say “we” I’m referring to the shooting and gun-owning community. And when I say ridiculous, I’m talking about time and energy wasting arguments like whether forward cocking serrations will get you killed on the street. Is that an exaggerated example? I don’t think so. Here are some of the ones I’ve spotted on the interwebz recently. The fact that people spend valuable time that could be directed towards productive activity like trying to change others’ deep-rooted political beliefs with Tweets and memes makes me wonder where their priorities really are.

Your Gun Is Derpy!

I’m really getting to hate the word “derp.” Lots of highbrow gun snobs use it to describe anyone with less knowledge than they have, at least in their opinion. If you use a technique that’s different than theirs or carry a different piece of gear, you’re derpy

, and your equipment is derp. Or maybe you’re a derp, and your gear is derpy. I can never keep the correct usage of derp and derpy straight, so bear with me. It’s not easy being condescending while using cool kids lingo, is it? On the plus side, derp is a multipurpose word that seems to be equally at home as a noun, verb, adjective, or adverb, so no matter how you use it, you’ll probably be OK.

So, I want to make sure that I understand the logic of this argument. If Gun Snob A shoots me with their Colonel Jeff Cooper

used to massage his pecs, I’ll be way more dead than they will be if I shoot them with a budget DeathTube Arms Splatter Blaster? I mean, the physics makes sense, I just want to make sure I understand the complex logic. Getting the scientific facts straight is important in serious business like this.

Instead of arguing incessantly about how Gun A will cause all the children of the earth to hold hands and sing, while Gun B will cause Miley Cyrus

to be nominated to the Supreme Court, how about taking your gun, whether it be A, B, or even C to the range. Shoot it a few hundred times. Did it keep working and firing forward? If it did, then that’s excellent news! The odds are pretty darn good that it’ll work again should you ever need to use it in self-defense.

Just because the Norwegian Forsvarets Spesialkommando Unit doesn’t use this particular gun doesn’t mean it’s incapable of saving your life. So go ahead, buy the one you like, provided it’s reliable, and damn the internet derp hurlers.

Front Cocking Serrations Will Get You Killed!

Yes, people really argue for hours on end over those lines on the front of pistol slides. Don’t get me wrong, I totally understand why it’s a life and death issue. After 84,000 or so draws, the inside of your holster might wear a little faster from those rough edges, and that would be epically tragic indeed.

But seriously, some gun makers add those for the convenience of press checks – pulling back the slide just a hair to make sure there is, in fact, a round chambered. If you’re keen on doing press checks, you may like having forward cocking serrations on your gun. If you think press checks are stupid and dangerous because you might shoot your fingers off in the process, then buy a gun without them. See? Isn’t that easy? 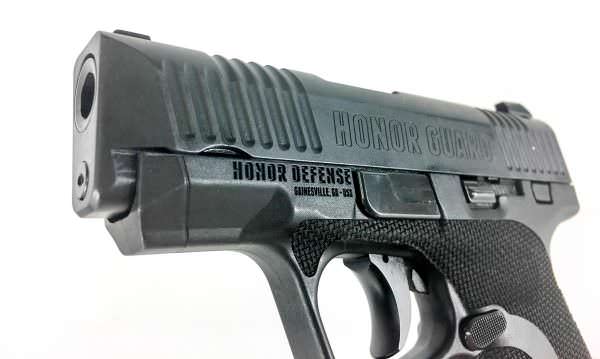 OMG! This Honor Guard pistol has forward cocking serrations! Is that good or bad?

Whatever your personal preference, save all that time trying to convince someone else of your preference and use it to practice on the range. We’ll all be better off for it.

Since gun people have been arguing for 100 years over whether a revolver or semi-automatic pistol is the “best-est” for self-defense, I took it upon myself to do some quantitative research on the matter. Looking at reams of data, compiled over decades, I found that a revolver has never, ever saved anyone’s life in a self-defense encounter. In fact, people who chose revolvers nearly always died, Yanni

songs were played at their funeral, and housing prices in a 17-mile radius declined by over 33 percent.

Actually, that didn’t really happen. As it turns out, revolvers work too. Folks have successfully used wheel guns since 1836 after Samuel Colt’s model was placed into production. Looking to more modern times, I suppose Jerry Miculek does OK with them as well. Anyone want to challenge him to a dueling tree match with the semi-automatic pistol of their choice?

As with almost all ridiculous arguments over shooting technique and choice of gear, the right answer lies between your ears. Not just the “smarts” but in the dedication, determination, and tactics in which you choose to invest your time and training effort. How about we all stop the nonsensical arguments and go the range and shoot?