What’s The Difference Between 7.62 NATO and .308 Winchester? If you want to start a good bar fight, ask about a saloon full of gun people about the differences between .308 Winchester and 7.62x51mm NATO. We’re going to dive into the fray with a simplified and practical explanation. Ready?

OK, so that was a bit of a wise guy response, but those statements are all quite true. Don’t worry, we’ll explain further. However, we’re going to try to do that in such a way that you don’t want to bash your own brains out by having to read about the nuances of things like piezo transducers.

Let’s look at a few categories of comparison, then we’ll sum things up.

Doing the 1940s and early 1950s, military rocket surgeons wanted to improve the effectiveness of the M1 Garand and its .30-06 cartridge. One contender, more suitable for higher capacity box magazines was a modified .300 Savage design called the T65. While specs varied throughout development, it ended up as the earliest iteration of the 7.62x51mm NATO. But, as usual, the commercial market was more nimble, and Winchester launched the .308 Winchester in 1952. It took the government until 1957 to have a cartridge and rifle hitting the barracks with similar specs.

Here’s where some of the confusion comes into the picture. Maximum pressure numbers thrown around for the two calibers are often shown as 50,000 “psi” for 7.62 and 62,000 psi for .308. At first glance, that appears to be a big difference and a potential reason why folks might consider it unsafe to fire a “higher pressure” commercial .308 cartridge in a rifle built for 7.62x51mm NATO. 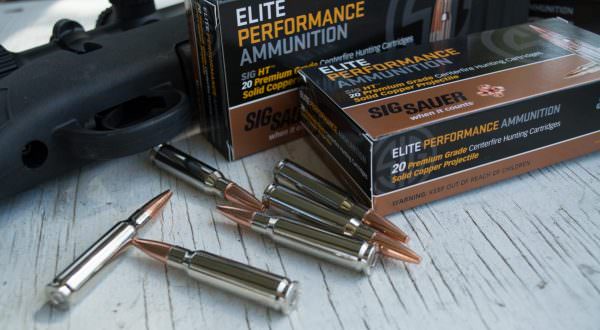 While commercial .308 ammo may have slightly higher pressure than 7.62x51mm NATO, it’s really the brass and chambers that are the issues to understand.

As with most things, the devil is in the details. I put that 50,000 “psi” number in quotes because it’s wrong, at least when shown with a pounds per square inch label at the end. That 50,000 number is actually an accurate representation of copper units of pressure or CUP. A far less precise way to measure pressure, the method literally relies on looking at how much little copper disks compress when you fire the gun. While there isn’t a consistent mathematical formula that equates CUP to pounds per square inch (PSI) across the board, the difference in this specific case is somewhere around 8,000. In other words, the maximum pressure for 7.62x51mm NATO is about 58,000 psi – not all that far from the 62,000 figure for commercial .308 Winchester. As both loads are routinely proof tested at far higher levels, this 4,000 isn’t a difference that’s going to alter the trajectory of Michael Moore’s daily Krispy Kreme run.

Measuring the thickness of cartridge cases is kind of a pain, especially since I tend to mash them all up when trying to cut them in half with my Dremel tool. So, I took the shortcut to illustrate the difference. From my big bucket of .308 / 7.62 brass, I selected some representative samples of both commercial .308 Winchester and 7.62x51mm NATO brass and weighed them. I picked several of each and averaged the weights. I didn’t measure the cases because they’ve been fired, so that won’t tell me much other than the general size of the chamber from which they went bang.

That’s a significant difference! Thicker walls combined with similar exterior dimensions means less powder capacity and a lower “top end” and all else the same, lower pressure and velocity. The thicker brass of 7.62 cases is a significant factor for the reason we’ll discuss next.

Last but not least we get to the real difference. Military rifles for 7.62x51mm NATO can, and usually do, have longer chambers. In things like machine guns powered by ammo made all over the world, there’s got to be some slack for reliable feeding and operation with all that violence going on during the feeding and ejection process. The solution is to make the chamber headspace a bit longer. If you’re not familiar with headspace, think of it as the distance from the bolt face to the point in the chamber that stops forward motion of the cartridge case. If chamber headspace is too long for a cartridge, it will float back and forth in the chamber. If headspace is too small, the bolt will not close properly or will require excess force to close.

How much different is the headspace? The .308 Winchester chamber headspace is between 1.630 and 1.6340 inches. The 7.62x51mm NATO is between 1.6355 and 1.6405 inches. While the published numbers show about six-thousandths of an inch difference, it’s not unusual for the headspace in a surplus 7.62 rifle to be 10 or even 15 thousandths longer than that of a commercial .308. That doesn’t sound like a big deal, right up to the point where you fire thinner commercial brass in a long-chambered rifle. The brass will stretch, possibly enough to contribute to a dangerous case rupture. Doing the same thing with thicker military brass is no big deal and the way the system was designed. Thicker brass can handle some extra stretching into a longer chamber throat, so it’s no big deal.

The solution to the question is to know your rifle and what its headspace really is. Only then will you know if its safe to shoot commercial .308 Winchester ammo in a 7.62 chamber.

Technically speaking, in terms of specifications, there are differences, but mainly in the chambers of rifles designed to fire each cartridge. 7.62 brass is a bit thicker, and commercial .308 is sometimes loaded to slightly higher pressure, but other than that, the cartrdidges themselves are pretty much the same.

Next on the “risk” spectrum is the scenarios of using 7.62x51mm NATO ammo in a .308 chamber. In theory, you might run across ammo that’s particularly long. Ammo might not chamber at all or might require undue pressure to chamber. That could result in dangerously high pressure. In reality, that would be really unusual. While 7.62 ammo cold be significantly longer, that’s a pretty rare thing, at least in a significant level, so most people don’t consider it a big deal to use 7.62 ammo in a .308 chambered rifle.

Where you need to be careful is using .308 Winchester commercial ammo in a 7.62x51mm NATO chambered rifle. While most modern 7.62 chambers are probably fine as they tend to be cut closer to .308 dimensions, it’s always safest to know exactly what you have in terms of headspace. If your rifle has long headspace, stick to 7.62 NATO ammo – don’t use commercial .308.