Shotguns are insatiable ammo-eaters, so one thing to consider is extra storage onboard.

It’s hard to argue that a shotgun doesn’t make an ideal home defense weapon. While capacity in terms of shell count will almost always be less than that of a semi-automatic pistol or modern sporting rifle, each one of those shells delivers a whole lot more impact that most any other choice.

Like most things, the decision as to whether to choose a shotgun depends on an evaluation of the tradeoffs that are important to you. The big factors boil down to better stopping effectiveness, higher recoil, and lower capacity. Which factors are most important to you?

If you decide to vote in favor of the shotgun, here are some things to consider when choosing the specific configuration for a home defense gun.

Until you have to use it as a club, it’s the ammo and not the shotgun, that does the work. The shotgun is just the delivery mechanism.

The blessing and curse of shotguns are the wide variety of ammunition types from which you can choose. At one end of the spectrum is tiny pellet and light recoiling birdshot. On the other end of the scale are giant hunks of lead called slugs. Just choosing a “shotgun” is not enough. You have to make a careful and informed choice about the ammo that feeds it. 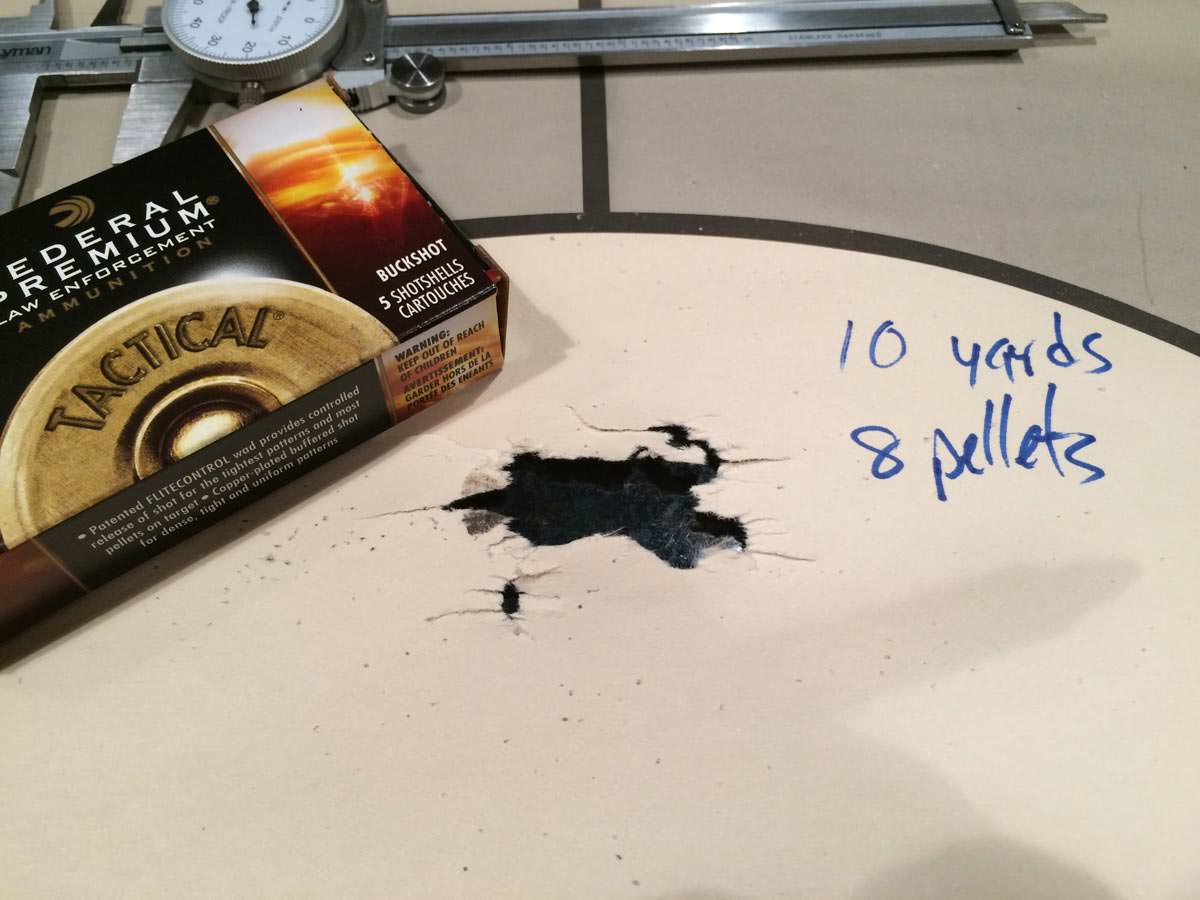 Choice of ammo may be the most important “feature” of all. This 10-yard pattern of Federal Premium Tactical FliteControl buckshot is one hole, and therefore very predictable.

Here’s where things get interesting. Depending on the nature of your home, you might make very different ammo choices.

If you live in an apartment, you might need to be concerned with over-penetration through neighboring walls. Regardless of your personal danger, you’re still responsible if you launch buckshot or slugs into the next dwelling. Some folks prefer to use birdshot for this reason. Just be very careful that you understand what you’re sacrificing if you sway in that direction. At distances measured in feet, smaller birdshot will penetrate. However, when you start to get past 15 feet or so, the penetration capability begins to fail dramatically. Yes, it’ll make a mess of an attacker, but may or may not stop them immediately.

If you live in an isolated location, you might choose slugs. They’re amazingly effective at indoor distances, but you can also shoot them accurately out past 100-yards should the need arise.

Personally, I prefer the old standby ammo for shotgun-based home defense – buckshot. Make no mistake, it will penetrate walls like a hot knife through butter, so you need to know what type of pattern your choice of gun and buckshot produce. I keep my Beretta 1301 Tactical shotgun loaded with Federal Premium 8-pellet 00 buckshot with FliteControl wads. These loads deliver amazingly small, and more importantly, predictable patterns. It will keep all pellets on a torso target from a range of 50-yards from this cylinder bore shotgun. At indoor distances, the pattern will stay smaller than a closed fist. In other words, I know where those pellets are going to go when I pull the trigger.

Whatever ammo you choose for your situation, it’s imperative that you test it at the range, a lot, so you know exactly how it’s going to behave. Every time you load a new brand or style of ammo you’ve got to test again.

Like most topics over which we incessantly argue, the choice of action type isn’t nearly as important as we would like to believe. A semi-automatic won’t necessarily fail when we need it most. A pump-action won’t necessarily work every single time. A break-action may just have enough ammo capacity to get the job done. Again, like most things, the user familiarity and skill are far more important than equipment choice.