The Weaver Tactical 1-5×24 scope is a high-quality, well-constructed optic that compares favorably to other models costing twice as much. Available on the street for just over $700, it’s not a cheap Charlie, but you get what you pay for. Considering the features and performance, it’s a fantastic value.

[color-box]With a first focal plane reticle, you can also use the mil-dot graduations on this scope for range estimation regardless of magnification level. (Tweet This)[/color-box]

More on that later. For now, just remember that all the benefits of first focal plane comes at a price – they’re more expensive to manufacture. 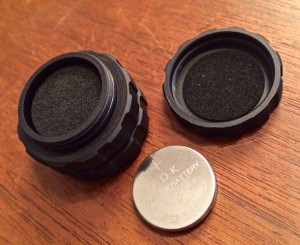 A hidden feature! The scope caps have a separate padded compartment for storage – like extra batteries.

The reticle is illuminated and powered by a single CR-2032 battery. CR-2032 batteries are used in all sort of things and are readily available at most big box, drug and many grocery stores. The scope comes with both red and green illumination, with 5 levels of intensity for each color. When turned off, or when the battery goes dead, you’ll see a black reticle as it’s glass etched.

Being that it’s designed as a tactical scope, it’s got all the durability and longevity goodies. It’s a one-piece construction design, has fully coated glass and is filled with Argon. It’s waterproof, shock proof and fog proof. I would also say this optic is idiot proof. The first focal plane reticle allows simpletons like me to use it and not worry about holdover details.

[color-box]The finish is matte black, so when you’re sneaking around at night playing ninja, it won’t make create of those glaring reflections that could give away your position.[/color-box]

Most importantly, the matte finish will match the finish of your AR rifle nicely.

I wanted to test consistency of the Weaver Tactical 1-5×24 scope, so I mounted it on a rifle with proven accuracy and consistency – a Rock River Arms LAR 6.8 chambered in, you guessed it, 6.8 Remington SPC. For whatever reason, this particular rifle has proven itself accurate with a variety of loads, but it seems to really like 90 grain Sierra Varminter flat base and 115 grain Sierra MatchKing projectiles. I prefer a two-part rest like this Blackhawk! Sportster Titan III shooting rest as it keeps the shooter involved.

I also wanted to shoot under fairly accurate conditions, so instead of shooting from a vice-type contraption, I used the Blackhawk! Sportster Titan III Tri-Stance Rest. This two-part system allows you to keep the gun in your shoulder and achieve a normal firing grip, yet provides plenty of stability for accuracy work. When you zero a rifle using a less restrictive set up like this, it’s more likely to achieve the same point of aim / impact when you’re out and about using a tree, post or vehicle as when using a bench rest. In other words, the shooter is still involved, though assisted.

First, I wanted to be sure that point of impact stayed true at various magnification levels. As the Weaver Tactical 1-5×24 scope ranges from a true 1x to 5x magnification, I fired shots at the same target with power set to 1x, 3x and finally 5x. All shots stayed within standard group size for this rifle and load. No problem there. The turrets adjust in 1/4 MOA clicks and require no tools to calibrate to zero. Here, I have the aluminum covers removed.

Next I wanted to check out repeatability and accuracy of the turrets, so I set up a standard “shoot the box” scenario. So I could perform big turret adjustments, yet still stay on the target, I moved my target to fifty yards. I kept the same point of aim for the entire scenario and moved the point of impact around with scope adjustments only.

This is a great time to explain how the Weaver Tactical turrets are set up. They windage and elevation turrets are covered, with screw on aluminum caps.

[color-box]Cool feature: The caps themselves have a screw-on cap that opens up a padded compartment where you can store a spare battery, or perhaps your favorite baby tooth.[/color-box]

The turrets require no tools to zero. Graduations are in ¼ MOA adjustments, or ¼ inch at 100 yards. When you get your desired zero point, just lift the turret straight up, at which point it spins freely so you can calibrate the scale to zero. The Weaver Tactical 1-5×24 scope shot an almost perfect box pattern – 64 clicks per side.

Back to the box shooting. I used a Sierra 90 grain Varminter flat base projectile with IMR 4227 powder. My load was achieving average velocity of 2,546 feet per second as measured with a Shooting Chrony Beta Master Chronograph placed 15 feet down range. Not the top end of the 6.8 Remington velocity, but reasonable. I only picked this load as it was shooting particularly well that day and I wanted to minimize other variables to look at scope performance.

I took the first shot at the center of the target, and as expected, since the rifle was close to zeroed, it impacted just outside center.

Then I moved a full 64 clicks left to establish the upper left corner of the box. Then 64 down. Then 64 right.

Finally I set the turret back to zero and fired again to make sure the point of impact would return to the center of the target.

As the photo shows, the Weaver Tactical 1-5×24 scope shot a picture-perfect box and return to zero was right back on target. When testing a scope, I suppose you can shoot a box pattern. But using strategically placed fruitcake is much more fun.

The repeatability got kind of boring, so I reverted to childish things. Rather than try to place a bullet hole in paper at a given location using just scope adjustments, I taped some common objects at different random locations on my target. By “common objects” I mean an old iPod and an unopened fruitcake made circa 1843. Doing a little quick math, carrying the one, and translating that to turret adjustments, I fired away.

The CIRT (Close – Intermediate Range Tactical) reticle is perhaps the most interesting feature of the Weaver Tactical 1-5×24 optic. I could write a book on it. Why? The ranging, ballistic drop compensation and caliber flexibility is limitless. Everything, and I mean everything, on this reticle is carefully calibrated so you can geek out to your hearts content. I can’t list out all the features and calibrations here, so I’ll mention a few highlights.

What does all this mean?

[color-box]The Weaver CIRT Reticle allows you to figure out exactly how far away your target is, and hit it. (Tweet This)[/color-box]

If you really want to have some fun, try an app like Ballistic, where you can upload the a custom reticle graphic and key in couple of measurements. Then you can map this reticle to most any caliber, velocity and projectile combination.

I’m still playing with this reticle. So far, I’ve tried it with .223 Remington / 5.56mm, 6.8 Remington SPC and 300 AAC Blackout. You can create holdover tables easily for any load you want. Now, if I could only stop tinkering and settle on a rifle and load… If you want to enjoy the CIRT reticle (2nd focal plane) for a lot less money, check out the Weaver Kaspa-Z scope (top) We’ll be reviewing that separately soon.

The CIRT reticle shines in a first focal plane placement. When you’re operating at 1x, the whole reticle makes a visible “crosshair” pattern in the center of the viewable area. If you light it up, it operates more like a holographic sight. The illuminated crosshairs occupy somewhere near 5 to 10 percent of the vertical and horizontal area.

[color-box]Translation: The aiming point is visible and fast to acquire when operating at 1x.[/color-box]

When you crank up the magnification to 5x, the reticle grows in size (first focal plane, remember?) until it occupies about ⅓ of the viewable area vertical and horizontally. It’s plenty large for precise shooting and the reticle is sharp.

The Weaver Tactical 1-5×24 scope is a heckuva value, considering what you get. Look around online,  especially at the buyer reviews. Nearly all of them were as impressed as I was with this scope. Crowd wisdom perhaps?

Got an AR in any caliber? Get one.