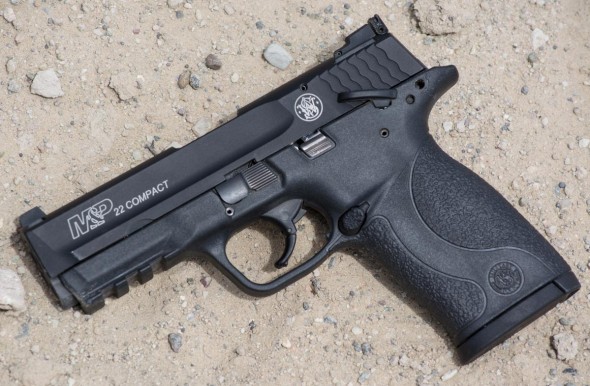 The next thought that crossed my mind was that this gun won’t be out of the box for six seconds before I’m compelled to attach a silencer. A SilencerCo Sparrow would be an excellent fit. The compact size just screams harmony and balance with the diminutive SilencerCo Sparrow.

I love .22s. Full size, compact, micro – I don’t care. They’re just fun. But there’s something to be said for a .22LR gun that is downsized for the rimfire caliber, and this one is. While I didn’t do a volumetric test to determine the exact size relationship, think of the M&P22 Compact as an 87.5% scale version of a full-size Smith & Wesson M&P – that number is from the company. Whatever the numbers, the feel and balance is great. I picked up a production model at my local gun store, East Coast Guns in Summerville, South Carolina. When I asked manager and firearms trainer Tim Elmer for his first impressions, the first thing out of his mouth was “Wow! That’s a neat little thing!” After a bit more reflection, he noted “the size is awesome, well perfect actually. It also seems very well built, the safety is positive and the action is smooth. Now I have to shoot it!”

Me too. So let’s check it out.

Opening the box, you’ll find a pistol, two 10-round magazines, keys for operating the integral safety lock, a hex wrench for windage adjustment of the rear sight, fired case and owners manual.

The pistol uses a blowback action with a fixed barrel, common to most .22 pistols. It’s a single-action, hammer operated firing mechanism. Here are the basic specs: If you’ve seen the original M&P22, you’ll notice the Smith & Wesson lettering is toned down on the new model.

The barrel itself is threaded, although that’s not obvious until you retract the slide. A screw on thread protector cap, the same diameter as the barrel, is hidden inside the slide when in battery. If you want to add a silencer to the M&P22 Compact, you remove the cap, add a thread extension and adapter to provide 1/2×28 threads compatible with most .22LR silencers. If you already have an adapter for the original M&P22, be aware that it won’t work – you will need a new one sized for the larger 3/8”-24 threads on the M&P22 Compact barrel.

The magazine release button is mounted by default on the left side of the pistol, but it’s easy to move it to the opposite side if you like. The owner’s manual includes clear step-by-step instructions with photos if you want to do this. The new M&P22 Compact is shown here (right) next to a Smith & Wesson Shield (left). I put a Crimson Trace Rail Master laser on my test gun because… Fun!

The M&P22 Compact features an ambidextrous thumb safety which blocks operation of the trigger. A nice design feature is that you can perform administrative functions like slide operation, slide lock and takedown with the safety engaged. We’ll talk about other improvements to the safety levers in a minute. While we’re on the topic of safeties, the pistol also has a trigger activated firing pin block and it’s drop safe.

The M&P22 Compact has a visual loaded chamber indicator on the top of the slide. A small curved cutout allows you to see if there is a cartridge in the chamber.