The Real Deal About School And Other Mass Shootings USA –-(Ammoland.com)- What if I told you that all of the mass and school shootings over the past 20 years or so could have been done, to equal effect, by a murderer using a 150-year old lever action rifle? You know, the same kind that was commonly used in the Civil War?

Or, what if I told you that the majority of mass shootings could have been done, again to the same effect, with a 170-year old single-shot Sharps-type rifle? That rifle was invented 13 years before the Civil War began.

In the collective rush to “fix” the problem of these types of unspeakable crimes, we tend to get collectively stupid by grasping at straws in a desperate race for a solution. You know exactly what I am talking about. When something bad happens, there’s an immediate call to ban something. So-called “high-capacity” magazines are almost always blamed for tragic results of mass shootings. The thinking goes that if you reduce magazine capacity, then vicious and heartless murderers wouldn’t be able to hurt and kill as many people. You’ve probably heard all the quotes in the news like this one:

“If only we didn’t have these high-capacity magazines on the market, the shooter would never have been able to inflict that level of harm…”

To the uninformed and intellectually lazy, these types of statements sound perfectly rational. When challenged with the fallacy of their logic, you might hear those same folks shift gears and offer up statements like, “Well, of course, it won’t completely prevent another mass murder, but it will probably help.” I get it. It’s hard to admit the existence of true evil and even harder to try to solve the root problems that cause humans to do unspeakable things. As a result, we cry for quick and easy solutions that feel good.

I recently sat in what was perhaps the most enlightening presentation I’ve seen in decades. At the recent United States Concealed Carry Association Expo, Chief USCCA Instructor Michael Martin presented a veritable mountain of data that he had painstakingly compiled about mass shootings. Deciding to look at actual facts as a basis for formulating meaningful, realistic, and effective response strategies, he evaluated what actually happened during mass shooting events. Were magazines a factor? What about police response time? Did it make a difference when unarmed people fought back against the killer? How about security, like simple door locks? Did simple and inexpensive deterrents like that make any difference?

The results of Martin’s data compilation are nothing short of stunning. I don’t have the space to go through all of the angles here, so I’ll stick with the magazine capacity angle as an example of the study. Since the perception of the uninformed is that magazine capacity allows an increased rate of fire, and therefore more killing in less time, Martin took a close look at that factor in dozens of shootings. Here are the actual rates of fire based on the number of minutes the murderer had compared to the number of shots fired. I’m naming the locations only as I refuse to print the names of the despicable slime that perpetrate these heinous crimes. All numbers reflect rounds per minute fired.

Next, Martin considered realistic rates of fire, performed by a relatively inexperienced shooter, as nearly all of these psychos are. With 30-round magazines, a sustained rate of fire is about 100 rounds per minute. Using a 10-round magazine, the sustained rate is about 75 rounds per minute. As you can see, not one of the actual events came anywhere close to these rates.

The point of all this? If people (meaning the uninformed and intellectually lazy) would stop to think for a minute before launching into half-cocked solutions, we might invest more problem-solving time in strategies that actually work. This is the real point of Martin’s research. By looking at the details of what actually happened in all these cases, we have a much better basis of understanding from which to do meaningful and effective things to dramatically reduce the number of these horrific events.

Consider some other data points from Martin’s research:

The real factor that drives casualty count is the time before the shooter is opposed – by someone else with a gun. Looking at all the events over the past couple of decades, the killers have an average of nine minutes of completely unopposed time to do whatever they want. Considering that over 70% of school killers end their spree by committing suicide, it’s clear that time is all they seek. There’s no escape plan. There’s not even a big hurry. Nine minutes of complete and total domination is an eternity. In fact, according to Martin’s research, it usually takes two minutes before a 911 call is placed. That alone is an eternity. Then it takes minutes for the police to arrive. Then it takes more minutes for responders to formulate and execute a response plan. The killer actually knows, not thinks or believes, but knows, that they have another four minutes after they hear the sirens coming. The result of all that is nine minutes of pure hell for the victims. 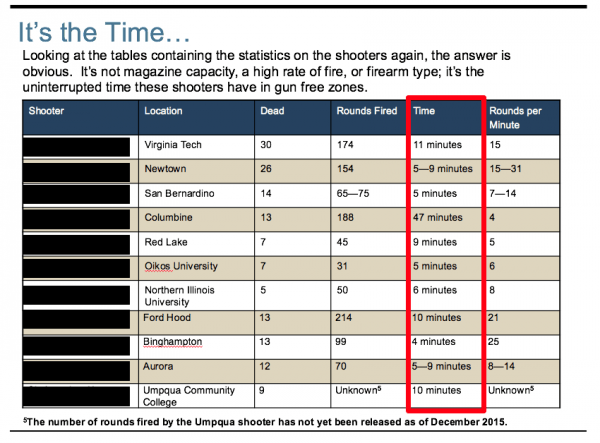 If nine minutes doesn’t seem like a long time to you, try sitting still and waiting to be shot while slowly counting to 540. Image: USCCA.

How about disruption and fighting back? If time is the number one determinant of casualties, then anything that even temporarily disrupts the ticking clock or plan must have a positive effect, right? As it turns out, that’s true. At Virginia Tech, students and professors in two of the five classrooms mounted resistance by trying to block the door. In these two rooms, a professor and one student were killed. In the three other rooms, 27 were killed and eight wounded. When the killer’s plan was disrupted in such as way as to cost him time, he moved on. At La Toscana Village Mall, New Life Church, Appalachian School of Law, and Thurston High School, potential victims fought back, ending the killer’s rampages.

How about background checks? As it turns out, this is no easy fix either. Of the cases Martin studied, 79% of mass murderers bought their firearms from an FFL and completed a background check. 13 percent stole guns and six percent acquired them through illegal means. Oh, none was acquired via private sale or “gun show loophole” as some like to call it. Did you catch that? Not one killer got their gun through a private sale. Stated differently, universal background checks would not have stopped a single one of the 47 mass shootings since 1998.

So what to do? Based on his learnings, Martin recommends a four-part plan. Be aware that we’re just skimming the surface here, Martin’s plan has hundreds of detailed action items. The USCCA is contemplating how to best disseminate this information, but for now, here are the high points.

If you stop to think about it, a Motel 6 guest room is far more secure than the average classroom. While Martin’s recommendations go far beyond locks and sturdy doors, a simple swing bar lock goes a shockingly long way towards disrupting an attacker. If you want to see some ideas in action, check out the leading edge security system installed at Southwestern High School in Indiana. Total cost? About $400,000, or less than 10% the cost of the average High School football field. 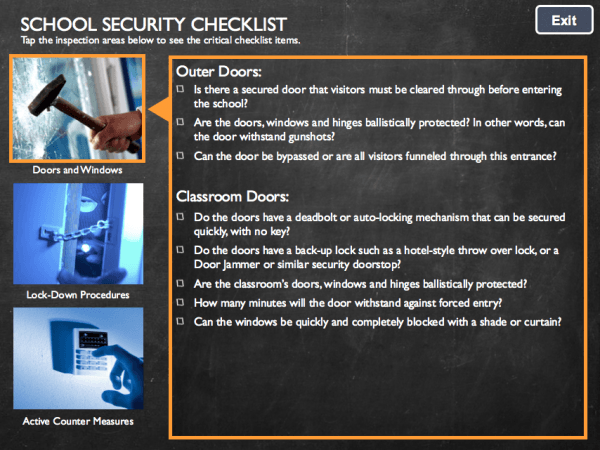 A sample of some of the suggested school hardening measures. Image: USCCA.

2. Teaching students and staff to fight back

Most of us have understood the wisdom of run, hide and fight for a long time. Finally, even the Department of Homeland Security is admitting the stupidity of telling victims to sit still and hope for the best.

We’ve got an armed pilot program, how hard can it be to create a similar program for teachers motivated to take and maintain training?

Do I need to comment on this? We’ve painted big targets on schools for far too long at the expense of far too many lives. It could not be more obvious that deranged killers actively seek these zones to maximize the impact of their nine minutes of fame.

So what can you as an individual do? It’s simple really. The solution to these problems is education. We need to educate the educators, the media, the politicians, and our friends and neighbors. If you want to get wired into a source of outstanding information, consider becoming a USCCA Certified Instructor.

It’s time to start calling BS on all the feel good and politically expedient “solutions.”