Thompson Center’s Compass packs a lot into the $399 MSRP.

Long(er) range shooting is so hot right now. Among the trendy calibers for long-range target shooting and hunting is 6.5mm Creedmoor. It’s not the only one, and we’re not going to get into a which is the best discussion here, but it does a heckuva job.

Earlier this year, the folks at Thompson Center (owned by Smith & Wesson) released a new and very affordable rifle – the Compass. More recently, the company launched this rifle chambered in 6.5mm Creedmoor. Being all gushy about 6.5mm Creedmoor, I had to get my hands on one for testing.

Before we get into the rifle itself, we ought to talk about exactly why 6.5mm Creedmoor is so interesting for longer range applications. To keep things (relatively) simple, let’s do some quick velocity, distance, and energy comparisons to a common multi-purpose caliber, .308 Winchester. Again, this isn’t a “better” or “not better” thing. Like 9mm and .45 in the handgun world, they’re just different. 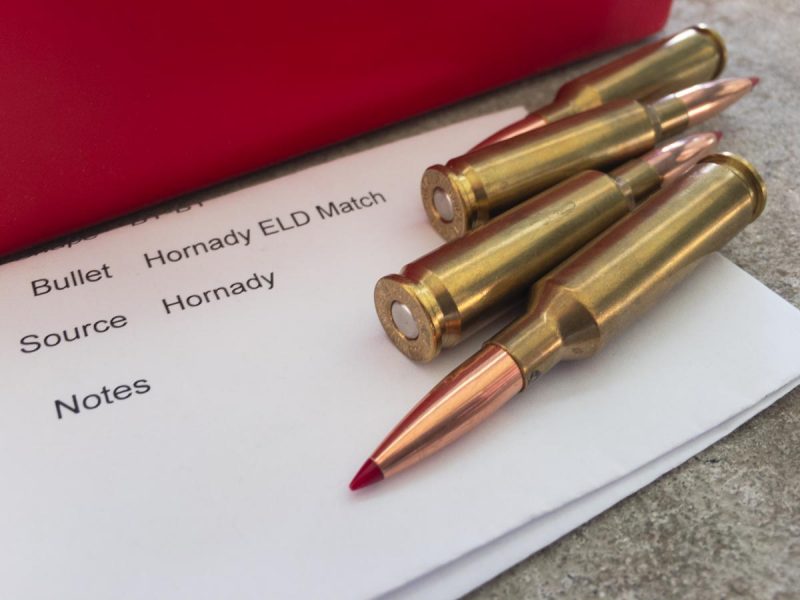 The newest Compass is chambered in 6.5mm Creedmoor.

Just for kicks, let’s look at the American Eagle .308 150-grain FMJ load. It flings the projectile at a factory-rated 2,820 feet per second. At the muzzle, that yields 2,663 foot-pounds of kinetic energy. Where I live, that bullet is going to stay supersonic until just shy of 1,000 yards, where it will be traveling at 1,118 feet per second. Oh, and over that distance, that 150-grain FMJ bullet will drop a whopping 404.17 inches assuming I zeroed it at 100 yards. That’s almost 34 feet! Oh, and the kinetic energy when it gets there 1.74 seconds after you pull the trigger is 416 foot-pounds.

Looking at the American Eagle 140-grain 6.5mm Creedmoor OTM load, we start to see some significant differences. Its factory-rated velocity is 2,700 feet per second, so muzzle energy works out to 2,275 foot-pounds due to the slightly lighter bullet weight and lower velocity. However, this bullet will fly almost 1,350 yards before going subsonic. At 1,350 yards, it’s moving at 1,116 feet per second and will deliver 387 foot-pounds of energy. At 1,000 yards, where the .308 Winchester went subsonic, the 6.5mm Creedmoor is still cooking at 1,390 feet per second with energy of 600 foot-pounds. It’s also dropped 342 inches compared to the 404 inches for the .308. That’s more than a five-foot difference. 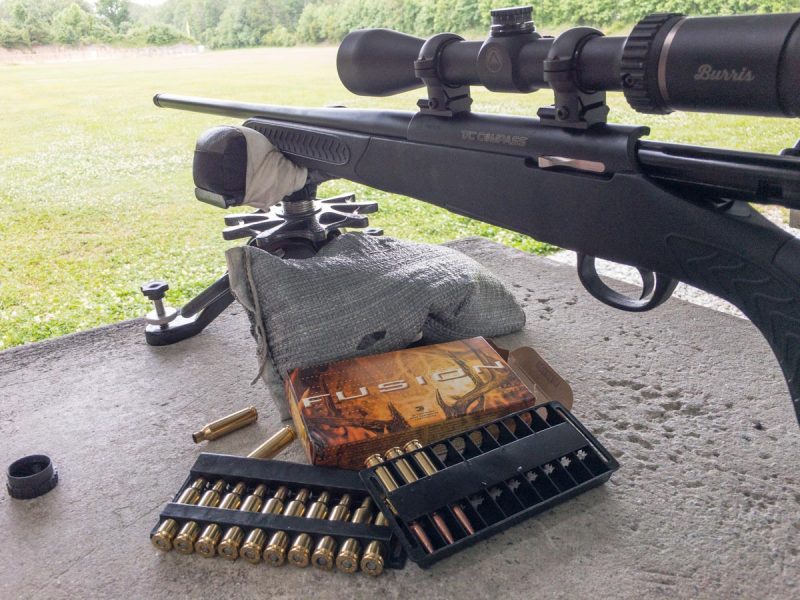 I tested this Compass rifle with a Burris Fullfield E1 3-9×40 scope.

The other big deal is the impact of a crosswind on the bullet flight. A 10mph sideways crosswind will blow that .308 bullet 88 inches (7.3 feet) sideways. The 6.5mm Creedmoor bullet will only drift 58.75 inches under the same conditions.

The bottom line is this. Since the ballistic coefficient of the 6.5mm Creedmoor projectile (.580) is much higher than that of the .308 Winchester bullet (.408), it has less drag, so it carries velocity over a longer distance. Since it’s exposed to gravity for less time for any given range, it doesn’t drop as fast or blow sideways as much. In plain English, and at risk of butchering ballistic science terminology, high ballistic coefficient bullets like the 6.5mm Creedmoor are slippery, so they shoot well at longer distances.

The Compass is designed to provide the right features that make for good shooting performance at a budget price point. The rifle carries an MSRP of just $399, and you can find it on the shelves for less if you shop. 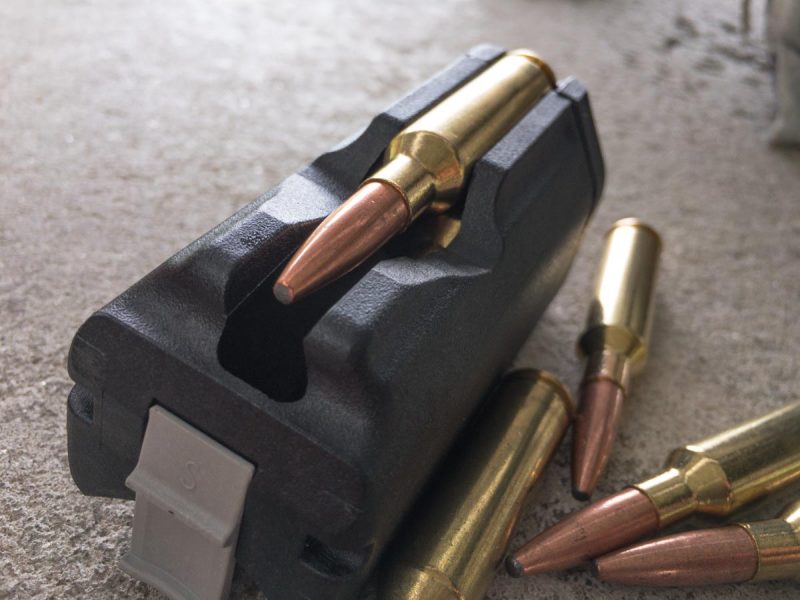 The removable magazine is flush with the stock but still fits five rounds of 6.5 Creedmoor.

Like most bolt guns, the Compass is available in an array of caliber options. Some specs, like magazine capacity and barrel length and twist rate vary a bit according to caliber choice. For example, larger cartridge size calibers have a 4+1 instead of 5+1 magazine capacity. As I write this, you can order a Thompson Center Compass in any of the following calibers:

The barrel itself on the Compass is one of the standout features for a number of reasons. The rifling pattern is called 5R. That means there are 5 grooves, but they aren’t “cut” with sharp edges. Instead, the rifling is more rounded in shape, so the bullets are “mushed” into the rifling rather than cut. This kinder and gentler pattern collects less copper fouling, leading to easier cleaning and longer barrel life. The 6.5mm Creedmoor barrel uses a 1:8-inch twist rate, although that varies with caliber choice. 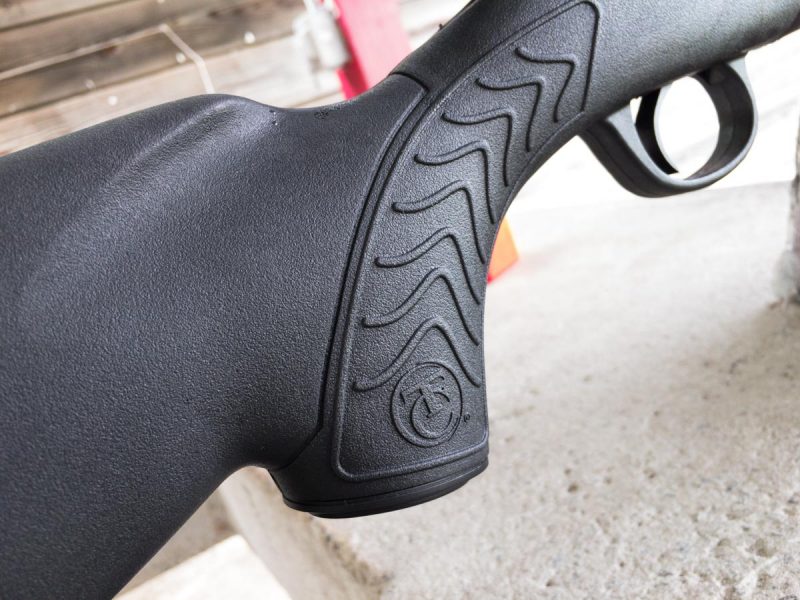 The Compass has a polymer stock with glove-friendly texturing.

The barrel is also factory threaded so if legal in your state, you can easily add a suppressor with no extra gunsmithing required. On this 6.5mm Creedmoor rifle, the threading pattern is 5/7×24. On smaller caliber Compass rifles like the .243 and below, the threading pattern is 1/2×28. The company ships the rifles with a thread protector cap installed. Last, but not least, the barrel is free-floated. I could easily slide a business card between the stock and barrel all the way back to the receiver.

The net result of all this is a factory accuracy guarantee. Using premium ammunition, you should be able to shoot three-shot groups into one minute of angle, or 1.04 inches, at 100 yards.

The bolt is a three-lug design. The handle has a 60-degree lift designed to provide space for easy operation with a scope installed. With my scope configuration, there was plenty of space for fast and easy bolt operation. The bolt also features a three-position safety lever. Pushed forward, the Compass is ready to fire. Pull the safety lever all the way back, and the bolt and trigger are locked. If you want to operate the bolt, but disable the trigger, just move the lever to the middle position. While we’re talking about the bolt, you’ll spot a spring-loaded push lever on the left side of the receiver. This is the bolt release. Just push that in to remove the bolt from the receiver for cleaning or travel. You’ll also need to use the bolt release lever to re-install the bolt. 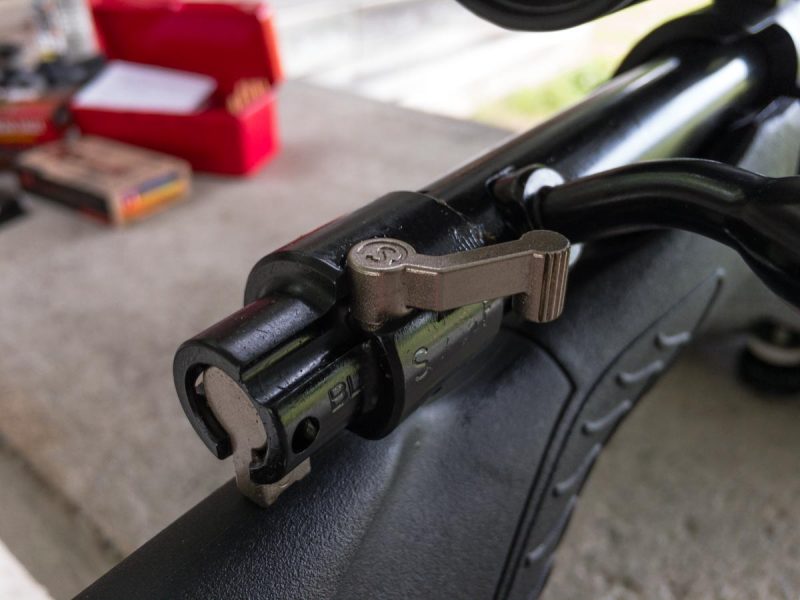 The three-position safety is shown here in the fire position.

The Compass features a removable magazine that’s flush with the stock – even the release latch is inset, so nothing is in the way of your support hand. The magazine is mostly polymer and well suited for use and abuse in the field. The 6.5mm Creedmoor version holds five rounds in the magazine plus an extra in the chamber if you like.

The trigger as shipped measured exactly five pounds according to my Timney Triggers scale. It’s a single-stage trigger with no detectable take-up stage, and the break is crisp. I liked it. The factory ships the Compass with the adjustable trigger set on the heavier side. That’s no problem because you can easily adjust it to preference. I’ll probably set this one at about 3 ½ pounds now that I’m done with the testing stage.

The stock is composite and features functional grip patterning on the forend and grip. It’s aggressive enough to work well with gloves but not abusive to bare hands. The included recoil pad was effective, although I don’t find 6.5mm Creedmoor to be hard kicking. It’s a plenty loud caliber but pleasurable to shoot.

The Compass comes with scope bases in place, so all I needed to mount a Burris Fullfield E1 3-9x40mm optic was a set of rings.

I had a small assortment of 6.5mm Creedmoor ammo on hand, so I shot multiple three-shot groups of each type from 100 yards. I averaged the group measurements for each ammo type to get the figures below, so they should be a decent indication of what the rifle will do.

The Compass is a lot of rifle for the money. I’m a big fan of shooting suppressed, and just having the factory threaded barrel is a big plus for me. Based on my quick and dirty accuracy testing, the rifle will shoot if paired with the right ammo. For example, I measured groups of .49, .72, and .72 inches using my hand load, Hornady 120-grain Match, and Federal Fusion 140-grain loads respectively. I’ll be doing some more experimentation to see what it really likes. With the accuracy guarantee and a lifetime warranty, it’s hard to go wrong with this rifle, especially considering the price point. 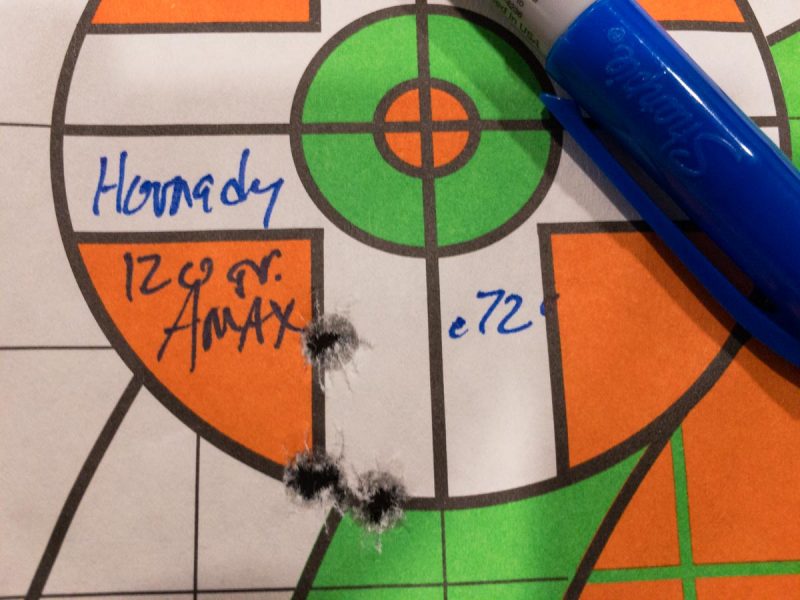 With the right ammo, the Compass will shoot.