The World’s Most Handy Magazine Carrier? These Blue Force Gear magazine pouches look so simple but are amazingly functional.

Every now and then I run across a piece of gear that’s so darn handy I can’t believe I didn’t find it sooner.

Last year at SHOT Show, I had a long chat with the Blue Force Gear

folks (my feet were tired, and their booth carpet was comfy) about their Vickers Slings

. If you haven’t tried one, and you own and AR-type or similar rifle, you’re not done buying gear yet. Yes, slings are handy for stable shooting, but for carbine applications, you can think of a sling as a holster for your rifle. Gotta do something with your hands? A sling will let you just drop the rifle, and it will stay safely attached to you. You get the idea.

Anyway, at the recent launch event for the Springfield Armory SAINT AR-15 rifle, the Blue Force Gear folks donated some of their Belt Pouch Magazine Carriers

for the training segments. I have to admit when I glanced at them, I had a ho-hum reaction. Some type of elastic magazine holder… Whatever. So there you have it, I’m a leather and Kydex snob. Anyway, once I actually tried these things, I was hooked. The pistol pouches are universal and work well with single or double-stack magazines.

The magazine pouches are made out of some type of space age elastic. We’re not talking about the stuff used in swimsuit linings; this is serious industrial grade stuff. You will NOT be able to tear it. Probably ever.

Since it’s some elastic-type stuff, the pouches contract and expand as needed. That means you can put virtually any pistol magazines in there. Single-stack. Double-stack. 9mm. .40 S&W. Heck, I’ve even been carrying my FNX 45 Tactical magazines in there, and they’re the size of shoeboxes. The best part is that when you’re done with one mag type, you can load a smaller one next time as they shrink back to near starting size. I regularly switch between double-stack 9mm mags for a Sig Sauer P229 Legion and single-stack magazines for a 1911 with no problem. I’ve been using the double magazine pouch to carry one spare magazine plus a flashlight. Handy.

, and it’s awfully handy to stick a magazine in the front pouch and a flashlight in the rear. If you’re worried about getting the munchies while out and about, just stick a couple of Slim Jims

These attach to a belt with Hook and Loop (Velcro) belt loops. Hang on a sec; I know that sounds budget, but there’s a good reason. That means you can quickly adjust them to virtually any realistic belt size and they will be stable. The loop flaps end up between your pants and belt, so natural pressure there prevents the loops from opening up. The belt loops are mounted in horizontal loops, so you can even carry your magazines sideways. 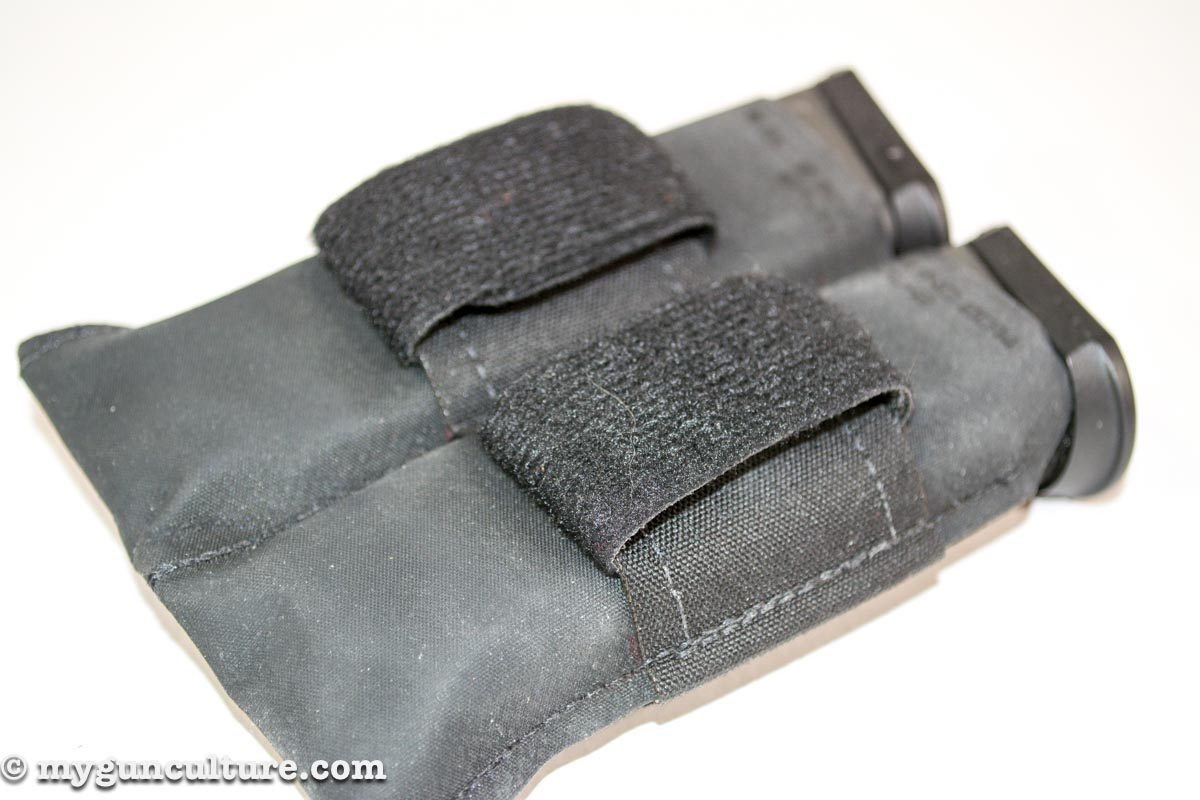 The belt loops are Velcro and adjust to belt size. Since the “flaps” are between belt and pants, they never come loose.

Being made of space elastic, these are flexible and therefore comfortable. Oh, and the dual pouch model acts as a hinge, so it wraps to the contours of your body. These are low profile and comfortable.

too so that you can gear up to your heart’s content.

So there you have it. One option that’ll work for all of your pistol magazine types.