The Seven Deadly Sins of Handgun Shooting: An Undisciplined Muzzle

Discipline is one of those words that, more often than not, conjures up unpleasant thoughts. 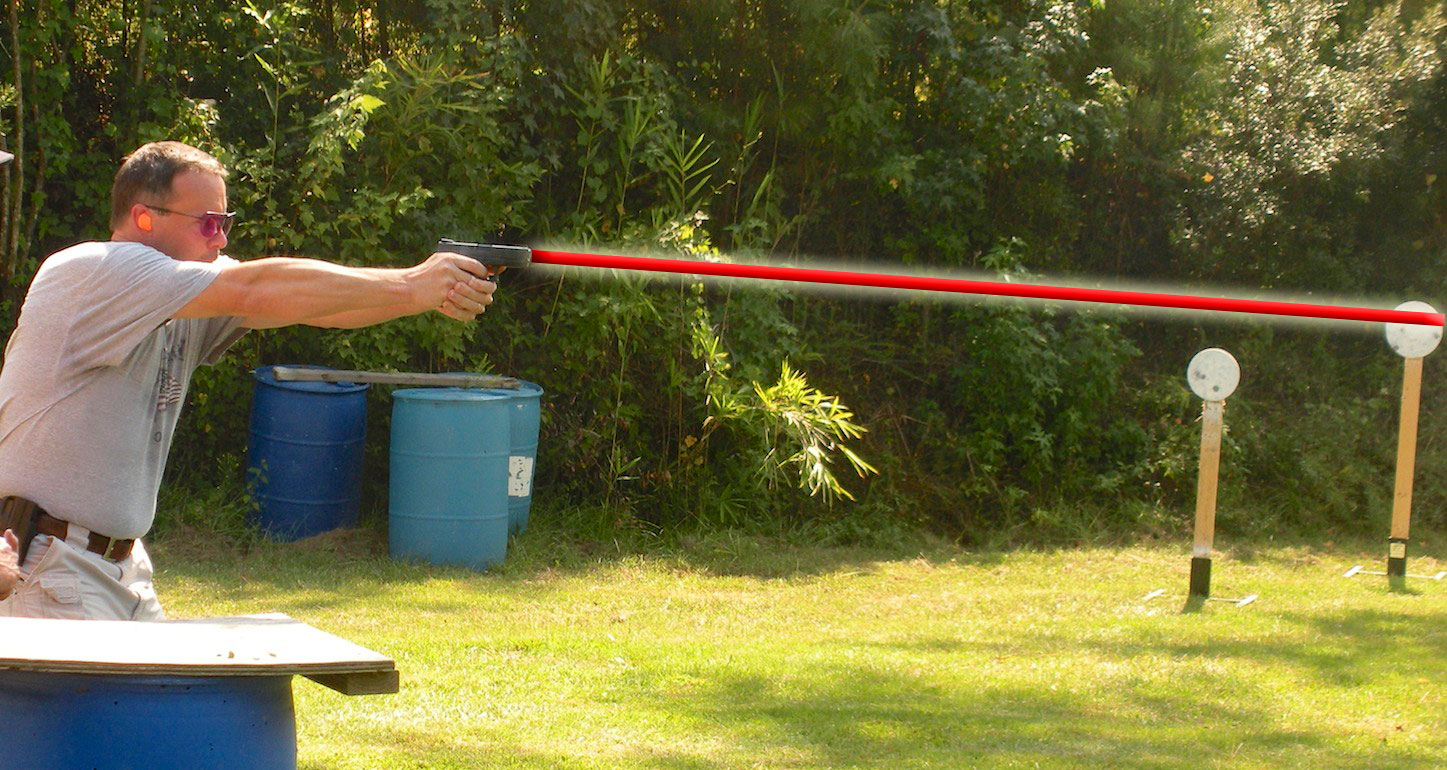 Imagining a giant lightsaber extending from your muzzle helps you think about where that muzzle is pointing!

When you’re trying to enjoy a quiet dinner date at Applebee’s, undisciplined children at nearby tables can ruin the ambiance and atmosphere you tried so hard to obtain with your careful choice of a romantic restaurant. Of course my own children were never undisciplined in public places. Just ask them about the “you better stop that tantrum right now because we’re in public” secret pinch. As soon as they get out of therapy, they’ll be more than happy to tell you all about that.

As I live in Charleston, South Carolina, I would be remiss if I didn’t mention Pat Conroy’s epic novel, The Lords of Discipline. While a fantastic read, that book is filled is bad imagery of discipline gone wild. Spoiler Alert: While seemingly polite and disciplined, Tradd St. Croix turns out to be a bad guy who was disciplined ineffectively as a child.

And of course, there’s Piers Morgan. Talk about an undisciplined muzzle! If he was really disciplined, perhaps be would have celebrated Independence Day by independently deciding to go back to his old job in England fabricating the news.  But that’s beside the point.

Most disciplinary issues are simply annoying. When it comes to gun muzzles, disciplinary failures can be really, really bad.

So what is muzzle discipline? Simply put, it’s making sure that the muzzle of your gun obeys your safe intent – at all times – no matter what. It can never, ever, ever point at anything you’re not willing to destroy, not even for a split-second.

Every time I take a new shooter to the range, I give them a lecture about Obi Wan Kenobi. I have them pretend that their gun has an infinitely long light saber inside the barrel. This light saber is always on and swishes through the air as an extension of the barrel, destroying everything it crosses. Besides being  cool fantasy, this imagery seems to help people understand that “pointing” a gun at something is more than just aiming deliberately. Pointing involves every movement of the gun. That means every movement from table or holster to shooting position and back. And removing the gun from a case and putting it back. And handling it for cleaning. And showing your buddy. And any other movement.

The “Side Slide Swipe” Holy guacamole Batman! There are TWO sins happening here! Finger on the trigger and racking the slide with the gun pointed at the poor sod to my left!

Last week, we got into a potentially touchy subject: inappropriate racking. The first type, the Needle Point Technique, is a simple misdemeanor infraction that doesn’t even warrant a ticket, much less a summons. It just makes things more difficult for the shooter. The second type of inappropriate racking can easily be considered a capital felony as it presents a serious safety issue.

I call it the Side Slide Swipe. If you use a solid slide racking technique that leverages your big arm muscles, you need to be sure to keep the muzzle pointed directly downrange. It’s surprisingly easy to orient the pistol sideways, pointing the muzzle right at your firing line neighbor.

While no one really wants love handles, having yours shot off by the person next to you at the range is not a recommended weight loss practice by the American Fad Diet Association of America.

I love to see new shooters get excited when they make good hits on a target. It’s fun, satisfying and infectious. It can also result in everyone at the range hitting the deck like a troop of hoplophobic spider monkeys. Yes, packs of spider monkeys are called “troops” and sometimes “missions.”

Handguns are small and short, which means it’s easy to turn around, with gun in hand, to tell your friends about that great shot you just made. We’re happy for you! We’re even happier if you put the gun down first before turning around to share your success!

The “It Doesn’t Matter Because I’m Done Shooting”

It’s amazing how many folks think muzzle discipline applies only when a gun is in firing position. They’ll be oh-so-careful when actually shooting, then wave that muzzle around like mad when putting the gun away or setting it on the bench. If I had a nickel for every time a shooter in a different lane left their gun on the table, pointing right at me, I’d be able to afford that one-way ticket for Piers Morgan. First class complete with a special order of kidney pie.

While I like to have fun to make a point, I’m not picking on new shooters. In fact I love to take new shooters to the range and teach them (in a fun and exceedingly polite way) not to make these mistakes. And if I’m focusing on teaching them to be careful, that also helps me think about improving my own muzzle discipline.

How about you? What undisciplined muzzle mistakes do you see out there?