The Boberg design offers a lot of bang for the size with its bullpup-like design.

Pistols aren’t all that great. I mean, I don’t want to get shot by one, but they’re certainly not the miracle fight stopping death ray that many think they are. By their very nature, handguns are all about compromise. A rifle or shotgun (or in my case, an MK-19 automatic grenade launcher) would be most people’s first choice for a gun capable of stopping an altercation instantly. However, you can’t very well carry a rifle around all the time, so you compromise. You accept the lower power and reduced fight stopping capability, of a handgun, in return for portability and convenience.

Since we’re already making compromises if we’re using a handgun, it makes sense to try to eke out every last bit of performance that we can. If you can design a handgun that gives you more bang for the buck in terms of effectiveness, ease of use and portability, then that’s a good thing. You’re making the best of an already compromised situation.

When I take a close look at a new handgun of any type, some of the first things that I try to draw out of my brain are the primary benefits of any particular design. What things make a particular gun special? What are the design goals of that gun? What features allow it to provide that maximum bang for the buck? Without anything unique or different, there’s not much reason for a product, is there?

When I first checked out the Boberg pistol, then spent some quality time with the Boberg folks in a Little Rock hotel bar, I quickly grasped the reason d’être. I think there are three things that stand out with this backwards bullpup pistol design:

We’ll explore these design concepts in more detail, but it makes sense to understanding the why’s behind the design before getting into the “whats” and “hows.”

A closer look at the Boberg backwards bullpup pistol

First, the “backwards bullpup” terminology is mine – Boberg doesn’t market the pistol that way, but I think it’s an accurate way to describe the design. Let’s take a closer look. 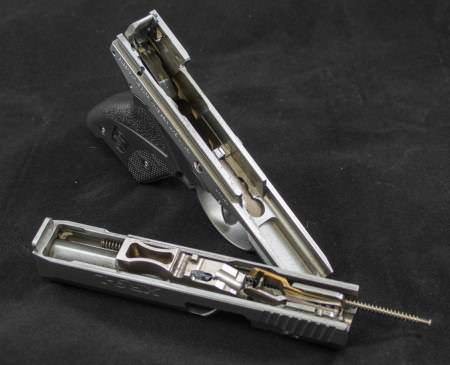 Note the “claw” that chambers the cartridge and the small slide return spring.

Like most semi-automatic pistols, the Boberg feeds from a magazine in the grip. The reason I keep using the word “bullpup” is that the barrel actually extends backwards directly over the magazine. In other words, imagine the whole barrel moved backwards towards the rear of the gun. Since the chamber is further back, the barrel can be longer without adding length to the front of the pistol. The technicalities are different, but the idea is similar to that of a bullpup rifle. Move the chamber (and receiver in the case of a rifle) backwards, so you can have a longer barrel within a shorter and more compact overall package.