[This article originally appeared at AmmoLand.com]

Recently, we discussed some other storied guns including the Remington 870 and Ruger 10/22. Both have been produced in quantities numbering in the millions over many decades.

The subject of this article, the U.S. Carbine, Caliber .30, M1 (that was the original official name) aka the M1 Carbine, reached a total production of over six million rifles in just 38 months. As a wartime project, quantity and speed were both production necessities.

The only other single WWII item made in greater quantities was the M1 steel helmet.

While the M1 Garand .30-06 was always intended to be the Army’s primary infantry rifle, a light rifle project was commissioned in 1942 to provide better defensive and even offensive capability to rear-echelon troops and others who couldn’t carry a full-size battle rifle and ammunition load. These other specialty weapon and support troops, like drivers, tankers, and artillerymen, normally would have been issued pistols as a defensive sidearm. Replacing the pistol with a small and light carbine would provide better defensive capability and relieve pressure on infantry units to provide security for support units. As the M1 Carbine made its way into the ranks, others picked it up as a primary service weapon. Airborne Paratroops and even regular foot soldiers appreciated the light weight of both rifle and ammo. Being able to shoot 15 rounds between easy and fast box magazine reloads was considered to be an advantage by many who sacrificed the power of a .30-06 Garand in return for volume.

What is an M1 Carbine?

Besides being about the most fun rifle ever, this portable little carbine weighed just more than half of the standard issue M1 Garand, coming in at about five pounds versus over nine for the M1 Garand. That’s a big deal, but the weight of ammo is also significant. A single .30 Carbine round (.44 ounces) weighs less than half of a .30-06 cartridge (.91 ounces), so a soldier can carry twice any many rounds with no increase in their overall load. The standard M1 Carbine uses a 15-round box magazine.

While weight varies just a hair depending on the variant, my National Postal Meter model weighs in at 5.5 pounds with an empty magazine. Overall length is just 36 inches. To put that in perspective, it’s an inch shorter than a standard Ruger 10/22 Carbine.

The rifle is short-stroke piston operated, with the gas port and piston apparatus on the underside of the barrel. One notable difference in the design is that gas is bled from the barrel much closer to the chamber than with other rifles. The idea was that the very hot gas wouldn’t create as much carbonization in the gas port and piston system, and that would mean lower maintenance.

The standard magazine is a 15-round box but different variations with more and less capacity have been used over the years. It probably goes without saying this is an iron sighted rifle. The front post is solid and well protected by wings on either side, unlike the 1903 Springfield’s thin blade. The rear is an aperture sight, originally a flip model for short and long range, then later upgraded to one adjustable for windage and elevation.

There are a number of myths floating around that the M1 Carbine was designed by some guy in prison for murder and such, but that’s not true. As you’ll hear in any post-game interview, it was a team effort. 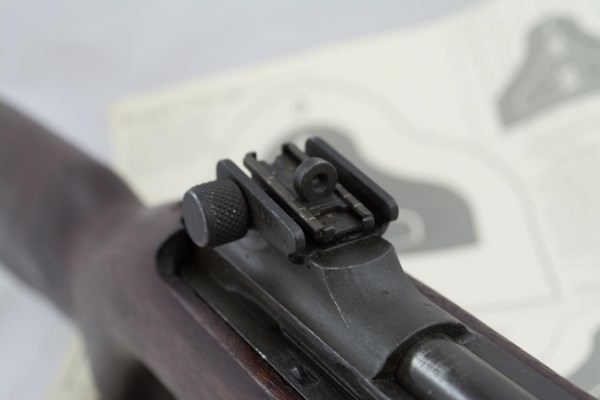 The original rear sight was an “L” type flip sight for dual range. Later, the windage and elevation adjustable aperture sights were phased in.

The legend is that David Marshall (Carbine) Williams designed the M1 Carbine while in prison for the 1921 murder of Deputy Alfred Jackson Pate during a raid on Williams’ illegal still operation. Like most myths, there is a bit of truth to this one. Williams did serve time for that murder, from 1921 to 1929, and while he was in the Caledonia State Prison Farm, he worked in the machine shop. While there he not only serviced the guards’ firearms, he designed numerous components and at least four semi-automatic rifles. The truth part of this story is that while there, he perfected his short stroke gas piston design, which was later used in the M1 Carbine project. In 1938, Williams joined Winchester to work on a scaled down .30-06 semi-automatic rifle for the military. This rifle was originally designed by Ed Browning (yes, related as half brother) and evolved into the Winchester Model G30M after browning’s untimely death.

Strangely enough, Winchester’s original role in this project was to design the cartridge only, and they did. It was derived from the 32 Winchester Self-Loading cartridge introduced in 1906. At the request of the Army, Winchester entered the light rifle trials program literally at the very last minute. Perhaps due to his “prison time” sense of urgency, Williams was unable or unwilling to work under time and contract pressure, and shortly after taking leadership of the project, he was assigned to other duties within the company. With others in charge, Winchester managed to complete a working prototype in just 13 days.

Over the span of days, Winchester engineers traveled back and forth between New Haven and Washington to get working carbines into the test program, often machining revised or replacement parts from memory of original specifications. All that chaos paid off, however, as the Winchester light rifle dominated the tests, completing 1,000 rounds of fire with just four stoppages. Dangerous and scary bayonet lugs were phased in during 1944.

Who made all those carbines?

Making over six million rifles in just 38 months is no small feat. In fact, it took ten different companies operating in 11 different facilities, not counting subcontractors. The interesting thing is that only one of these ten companies was in the business of making firearms before the wartime contracts – that would be Winchester, who designed it in the first place.

The other producers, and number of carbines made included:

* The government never ended up officially accepting any of the Irwin-Pederson carbines.

If you were adding along with the list, you might have noticed that those numbers only total 5.9 million and change. That’s because Inland also produced another 300,000 some odd M1A1, M2, and M3 variants, bringing the grand total up to about 6.2 million carbines. Literally hundreds of subcontractors in a wide array of industries produced component parts for the M1 Carbine production effort. For example, if you have a Saginaw model in your gun case, it’s entirely possible that the Wadsworth Watch Case Company made the magazine catch, ejector, extractor and firing pin for your particular rifle.

The number of contractors, the speed of production, and sheer volume makes collecting “correct” models exceedingly difficult. In the wartime rush, it was a regular practice for companies to swap parts, mix barrel and receivers from different manufacturers and so on. In fact, that was part of the plan – to be able to produce tons of rifles quickly without the normal bottlenecks. Additionally, most M1 Carbines have been through at least two major overhauls since the 40s, where more mixing and matching of stocks, barrels, and component parts occurred. Oh, and over five million of the total six million rifles have been shipped overseas at some point for use by United States Allies.

As a result, if someone wants to sell you an “original” M1 Carbine in its native and correct configuration, be very wary as you’re getting into expert collector territory.

The “standard” .30 Carbine cartridge uses a straight-walled case that holds an 110-grain, .30 caliber (.308) projectile. While there is no bottleneck, the case is slightly tapered towards the mouth. Average velocity is right around 1,900 feet per second as originally designed, although modern loads move a little higher and lower than that. This yields a muzzle energy level of 881 foot-pounds. With those figures, and even with the light weight of the M1 Carbine, recoil is exceptionally light. Firing an M1 is louder than a .22, but almost as pleasant. Metal butt plate or not, you can shoot this rifle all day with no ill effects. The M1 Carbine cartridge is less than half the eight of a .30-06

During the year of introduction in 1942, a request was made for a variant even more suitable for paratroops of the 82nd and 101st Airborne Divisions. The Inland production team designed a folding wire stock model that was later designated the M1A1. Inland ultimately made 140,591 of these. They remain a hot collector’s item today, so beware of fakes. It’s entirely possible that there are more “assembled” M1A1 guns on the open market than correct originals.

Late in World War II, the M2 model was introduced. The M2 added select-fire capability and 30-round magazine capacity. The rate of fire was in the 850 to 900 rounds per minute range.

In the same general time frame, the M3 variant was issued. This model added an infrared SniperScope setup that allowed effective use against targets in the dark. “Scope” is not quite a descriptive term as the 30-pound system included a lamp hung under the barrel, a scope on the receiver, and a battery backpack. According to reports, the M3 models proved incredibly effective in the Okinawa campaign against night infiltration attacks. Some estimates claim that up to 30% of all enemy small arms casualties were inflicted by the M3 with night vision apparatus.

Want a brand new one just like the original?

While you can still find M1 Carbines at local guns shows without too much trouble, you can also buy a brand new one, manufactured just like the originals. At this year’s Shooting Industry Masters fundraising event, I had the opportunity to shoot the brand new, but old, Inland Manufacturing M1 Carbine. You can buy one modeled after the very last model manufactured back in 1945 or an authentic 1944 version without the scary bayonet lug. The 1944 model serves a dual purpose as it’s legal in some states that get upset about the possibility of antique bayonet crime.

While I’m a sucker for interesting historical guns, the M1 Carbine just might be my favorite. The history is fascinating, but better yet, this gun is exceptionally fun to shoot. It’s like a handy .22 rifle with just a bit of added gorilla juice.