A 1945 M1 Garand from Springfield Armory

The familiar name, Garand, is from the inventor John Garand, who spent a 34-year career designing and improving semi-automatic military rifles at the Springfield Armory. By the way, it’s pronounced in such a way as to rhyme with the word “parent” not “Grrr-AND.” According to M1 historian Scott A. Duff, Garand started working on the rifle from the onset of his appointment to general ordnance design engineer for Springfield Armory on November 4, 1919. Sixteen years later, the M1 as we know it (almost) was born. 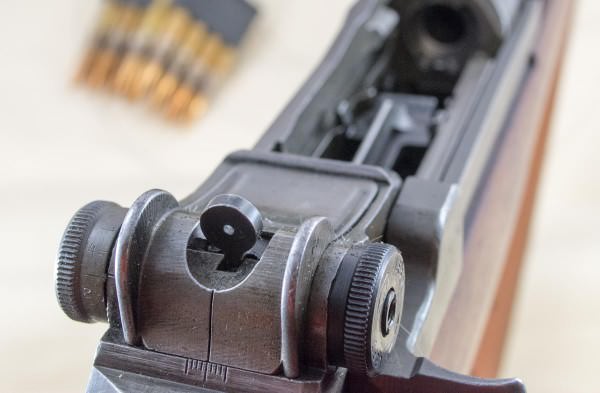 The adjustable aperture sights on the M1 are excellent.

Originally designed as a .276 caliber rifle that fired 125-grain bullets at a velocity of 2,700 feet per second, the M1 was morphed into the .30-06 we know and love starting in 1929 based on comments from the Army’s semiautomatic rifle selection board.

The Garand is a piston operated rifle, where gas is bled into a gas port (previously a gas trap) near the muzzle. The gas pressure moves an operating rod that retracts the bolt, ejects the spent cartridge case, and compresses the operating spring. The spring then moves the bolt forward, collecting a new cartridge from the en-bloc eight round magazine and locking in preparation for the next shot. 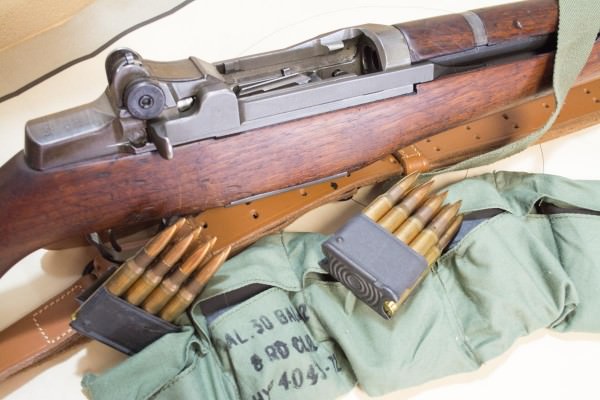 The en-block clips feed directly into the top of the receiver.

That en-bloc clip is one of the unique identifying features of the M1. Ammunition was delivered pre-loaded into eight-round spring “clips” that were inserted, “clip” and all, into the receiver. I quote the word “clip” as it’s not technically a clip in the classic sense, as a clip is a device used to load a magazine. Technically, the en-bloc clip is kinda-sorta considered a magazine, but also kinda-sorta a clip. But that’s getting into minutia. While eight rounds of semi-automatic was a great thing for rapid fire, the design of the en-bloc clip system prevented easy “topping” off of the magazine. If only a few shots are fired, you either have to finish that magazine before reloading, or eject the partially used clip and stuff more rounds into it. That’s not an easy task, especially under pressure. When the last round is fired, the rifle ejects the empty clip with a pinging sound. Legend says that enemy soldiers often waited to hear this sound, then left their positions and charged, knowing the Garand user was now reloading. However, there are few, if any, documented (documented cases folks!) of this actually happening. One can reload an M1 much faster than an adversary can extricate themselves from cover and run across open ground. It’s not much, if any, slower than reloading a semi-automatic pistol magazine.

The rifle itself weighed in at about 10.5 pounds. The weight plus its semiautomatic operation make it pleasant to fire, even with the not insignificant recoil of the .30-06 cartridge. When firing the Garand, the all-steel butt plate is not even abusive to the shooter. The manageable recoil makes for fast follow up shots and more accurate shooting as the incidence of shooter flinch is greatly minimized. 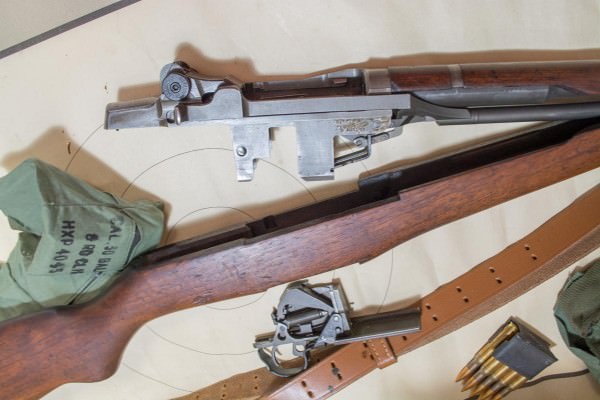 Field stripping is easy and requires no tools.

The rifle, as designed, fires a .30-06 cartridge, and many variations were available during the wars where the M1 was widely used. The rifle could fire standard ball, armor piercing, tracer, incendiary, grenade launching and blank rounds.

If you have an M1 Garand or are considering getting one, be sure always to use proper ammunition. The gas piston was designed to operate correctly with a very specific combination of bullet weight, powder charge, and pressure curve – basically mil-spec M2 ammo. Some modern commercial ammunition is loaded to higher pressure and can damage your classic rifle. The issues are far too complex to get into here, just be careful to use the right ammo and don’t experiment.

During World War II, only Springfield Armory and Winchester manufactured M1 Garand Rifles. According to Scott Duff, before and during the war, Springfield Armory delivered a grand total of 3,526,922 rifles. 12,356 of these were actually shipped in 1946 from existing wartime orders. Winchester produced M1 rifles from 1941 through 1945, delivering a total of 513,880 Garands. 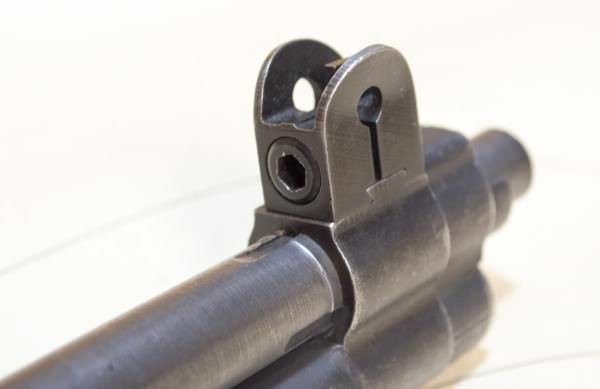 The front sight is windage adjustable and well protected.

The sniper models: the M1C and M1D

M1 Garand sniper models are a unique design. Due to the need to load the en-bloc clips from above, you can’t mount a scope directly on top of the receiver as it would block access to the magazine. As a result, when the need arose to configure the semi-automatic for longer range use with optics, a creative side mount system was designed.

In mid-1944, the M1C design was finalized and approved. This scoped M1 Garand featured a side mount attached with five new holes drilled into the side of the receiver – three for screws and two for support pins. The mount held a slightly modified version of commercial Lyman 2.2x optics deemed the M81 and M82. The M1D Garand uses an alternate scope mount system that relies on a barrel mount and does not require holes drilled into the receiver. 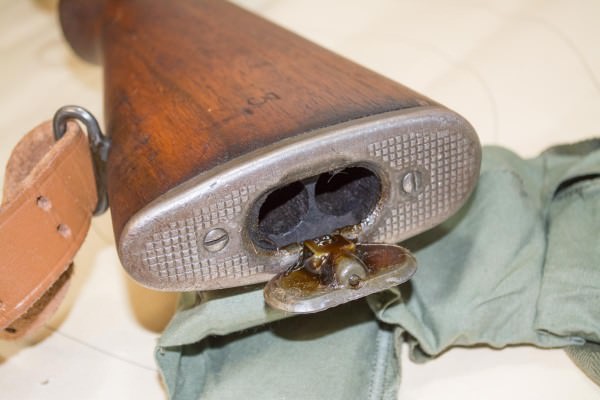 The steel buttplate hides compartments for oil and cleaning tools.

During WWII, the M1C’s were used in service, but in limited quantities due to their late introductions. While a small number of M1D models were made during the war, they weren’t issued, officially at least.

Collecting sniper variants is fraught with risk unless you get educated. Converting a standard M1 into a “made up” sniper variant is not all that hard. Drill a few holes and stick a mount and M2 flash hider on the rifle and it looks legit. While presence in the right serial number range is a clue to authenticity, it’s no guarantee as standard rifles were also made in the same range. 7,971 M1C models were manufactured during World War II, so the authentic ones are a relatively rare find. The M1D models are more prevalent because a lot more were made – well, converted actually. After World War II, Springfield Armory converted thousands of standard service M1 rifles into “D” models by swapping the barrel with the “D” model barrel. Since they were made up after the fact, and not originally manufactured as a sniper version, it’s much harder to tell authentic from fake. In fact, it’s nearly impossible.

While we’re on the subject of gun show fakery, beware of the so-called “Tanker Model” or T26 M1s. Those were never issued officially, although two or three prototypes were made by Springfield Armory. Not two or three thousand, or hundreds, or even dozens – just two or three rifles. Unless you want a faked up one just for fun, save your money. 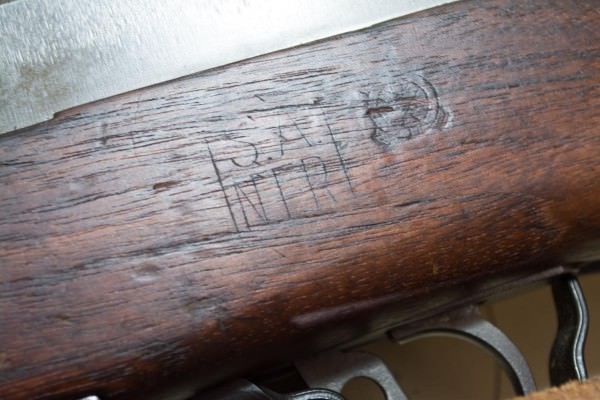 One of the fun things about collecting M1 rifles is that you can learn about about when it was made, and who was in charge.

The stock appears to be original. You can tell from the cartouche stamp on the left side of the stock just above the trigger. It reads “S.A. NFR.” That tells us that the rifle was inspected and accepted at Springfield Armory while Ordnance officer Brigadier General Norman F. Ramsey was in charge. His “reign” in that position began in October 1944 and ended during November 1945.

There are a couple of great books that will help you navigate the myriad of parts and markings to identify the specific characteristics of most any given M1 Garand. I recommend these for starters:

The M1 Garand: World War II by Scott A. Duff

The topic of the M1 Garand is far, far larger than we can even begin to touch on here. Get a book or two and you can start to develop a picture of all the interesting variants throughout its lifespan. Beginning with service and sniper models, one could quickly add a National Match and 7.62 NATO conversion to get an M1 collection rolling. Add in some post-WWII production samples from International Harvester and Harrington and Richardson and your collection is already approaching double digits!

If you’d like to get your very own, they’re available at most any gun show. If you know what you’re doing, that can be a good way to get your hands on one. If you want to go the safe route, check out the Civilian Marksmanship Program. Assuming you meet the basic legal qualifications, you can order one direct.