When it comes to clothes, cars, and even a cup of coffee, we tend to think nothing of paying extra for an upgraded model. Heck, we even pay extra for water that some guy pours into a fancy plastic bottle.

Accordingly, if you choose to carry a gun for self-defense, is there any reason you can’t choose a stylish one? Of course, that’s assuming that function and performance aren’t compromised. Better yet, why not consider a handgun that offers custom premium operational features and looks snazzy?

Affectionately called a “snubbie” revolver, this one has a 1.88-inch barrel and a five-shot cylinder. These ideal carry characteristics have been offered by the Smith & Wesson folks for just about 67 years now in some variant of the “J-frame” package. As the “snubbie” nickname implies, it’s small. Overall length is just 6.3 inches and unloaded weight is 15 ounces. That’s the same length as a Springfield Armory XD-S, but somewhat lighter as the XD-S weighs 23 ounces unloaded. But with a snubbie, you can’t really judge size and portability by the paper dimensions. The shape is what makes it feel much smaller than the specs imply. There’s something about the arc shape that makes it disappear in a pocket. 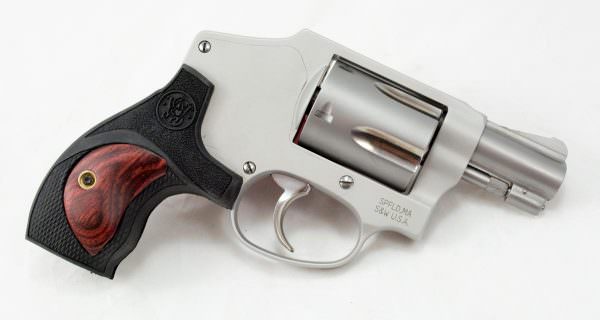 Note the polished cylinder flutes, trigger, and frame screws. The grip not only looks great but does a nice job dampening felt recoil.

This model is chambered for .38 Special +P and includes an internal hammer. That means that you can’t see, or touch, the hammer. There are a couple of reasons for that. First, the 642 makes a great ankle holster or pocket carry gun. The lack of exposed hammer means there is nothing to snag clothing when you need to draw. The other reason is to prevent manual cocking. In a double-action revolver with an exposed hammer, you can either fire by pulling the trigger with a lot of force, usually 10-12 pounds, or you can cock the hammer with your thumb and break the shot in single-action mode. A single-action shot requires far less trigger press, usually somewhere in the three or four-pound range. With an “up close and personal” defensive gun like this, you generally don’t want a light trigger, so hiding the hammer prevents the gun from being used in the single-action mode. The long story made short is this: it’s got no exposed hammer on purpose.

The Performance Center gunsmiths have made quite a few improvements to the standard 642 revolvers, both cosmetic and functional. The action has been finely tuned, improving the quality and consistency of the trigger press feel. This one is smooth, smooth, and more smooth. The result of a quality trigger is improved accuracy, not because it does anything mechanical to make the gun shoot straighter, but because it helps the shooter to operate the trigger without pulling the gun off target. In a related improvement, you’ll notice that the trigger itself is jazzed up. It’s polished to a smooth, rounded surface for comfort and buffed to a bright shine. It looks and feels great. 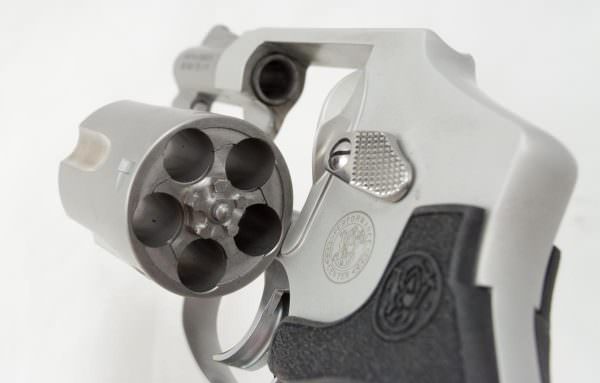 The Performance Center Model 642 has moon clip cutouts in the cylinder.

Also on the functional side, the Performance Center model features a chamber cut for moon clip use. Let’s stop and explain what that means. A moon clip is a thin, round wafer of metal or polymer that holds cartridges in the exact orientation that they fit into a revolver cylinder. The idea is that you can drop a moon clip right into the cylinder and load all the chambers at once. In this case, the moon clip for the 642 would hold five cartridges. The gotcha is that the moon clip has thickness, so you can’t use one on a standard revolver – there has to be a cutout in the cylinder to accommodate the moon clip itself.

The benefits of using a moon clip are extraction reliability be speed. If all the cartridge cases are held together, it’s faster to pop them out she spent and unlikely that one or two will get caught up in the process. The second benefit is reloading speed. Dropping a self-contained cylinder of cartridges into place is fast, much like inserting a magazine in a semi-automatic pistol. However, you can still load and fire cartridges without using a moon clip, so it works either way.

The grips on this 642 not only look great, but do an admirable job of reducing felt recoil. Super small and light guns aren’t always much fun to shoot because the light weight doesn’t do much to dampen recoil and the small size gives you less to hold. The result is usually a jumpy, snappy gun. Not so with this one. The synthetic grip material is comfortable and reduces the shock, even when shooting full-power defensive ammo. Oh, and the look good part? You’ll notice wood inserts on both sides of the grip. They’re placed in such a way as to not interfere with the recoil-reducing benefits of the synthetic grip material. While we’re talking about the grips, the frame is standard, so if you want to add aftermarket or Lasergrips, you can. I tried out the Crimson Trace LG-350G Lasergrips, and they worked like a champ. The Lasergrip is a little taller than the factory stock, but that give you a little more finger space. 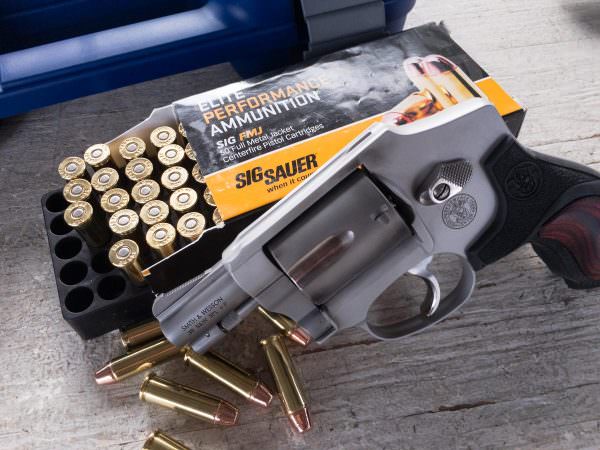 Most ammo, like this Sig Sauer Ammunition 125-grain load, shot right through the front sight.

If you look closely at the cylinder itself, you’ll see that the cylinder flute areas have been polished to a high stainless gloss. The flutes are the cutouts surrounding the exterior of the cylinder, and they exist to remove unnecessary weight. While we’re talking pure cosmetics, check out the thumb piece and side plate screws, they’re polished to a bright shine too.

I shot the Smith & Wesson Performance Center 642 with a variety of premium ammunition to test real-world velocity, subjective feel, and practical accuracy. With all loads tested, the feel was surprisingly controllable. That decorative synthetic grip really does its job. The material dampens shock while the grip shape fits into the meat of your hand in such a way as to maximize contact and thereby increase control.

I tested velocity by setting up a Shooting Chrony Beta Master Chronograph 15 feet down range. Here’s what I measured.

As for accuracy, I shot the same four ammo varieties using a casual beanbag rest at a target 15 yards down range. Given the intended use of a gun like this, I didn’t bother trying to shoot meticulous groups. Rather, I wanted to see how the point of impact and point of aim related. All four ammo types easily generated five-shot groups in the three-inch range. More importantly, the 110 Federal HST and both Sig Sauer 125-grain loads shot right through the front sight. The heavier American Eagle 158-grain bullets grouped dead center laterally but placed just over the front sight, so that preferred a six o’clock aiming position.

Here’s the thing. You can buy a standard Smith & Wesson Model 442 or 642 (the difference is only the finish and the stainless cylinder rather than carbon steel on the 442) for a manufacturer suggested retail price of $469. This Performance Center 642 has an MSRP of $536. While many of the differences are cosmetic, you’ll notice a big functional difference with the trigger. With a small gun like this that requires some skill to run well, that’s a big deal. Hey, if you’re going to carry a gun every day, why not consider a spiffed up model that’s not only more pleasing to the eye but better on the range?