I shot all three of Smith & Wesson’s new M&P M2.0 Pistols in the same outings, so it was easy to compare guns and ammunition performance.

It’s been a decade since Smith & Wesson launched the original M&P semi-automatic pistols. While there have been some incremental variations and new models since then, there’s hasn’t been a major overhaul to the basic design – until now. With the M2.0 series, the Smith & Wesson folks have made welcome improvements to the M&P line. I got my hands on several pre-launch models, two different 9mms, and a .40 S&W, and had the opportunity to test them out before market launch. The .45 versions are being announced at the same time, and I have one of those on the way, too, but I’ll have to report on that one at a later date.

I’ve always liked shooting M&Ps, even though the original triggers had room for improvement. I like the well-rounded grip profile and grip-to-bore angle, but that’s admittedly a personal opinion. I’ll get into the details of the new models in a minute, but for now, know that the trigger has been dramatically upgraded. With the exception of the manual safety and colors, all new features are the same, so I’ll review them as a group for the most part. 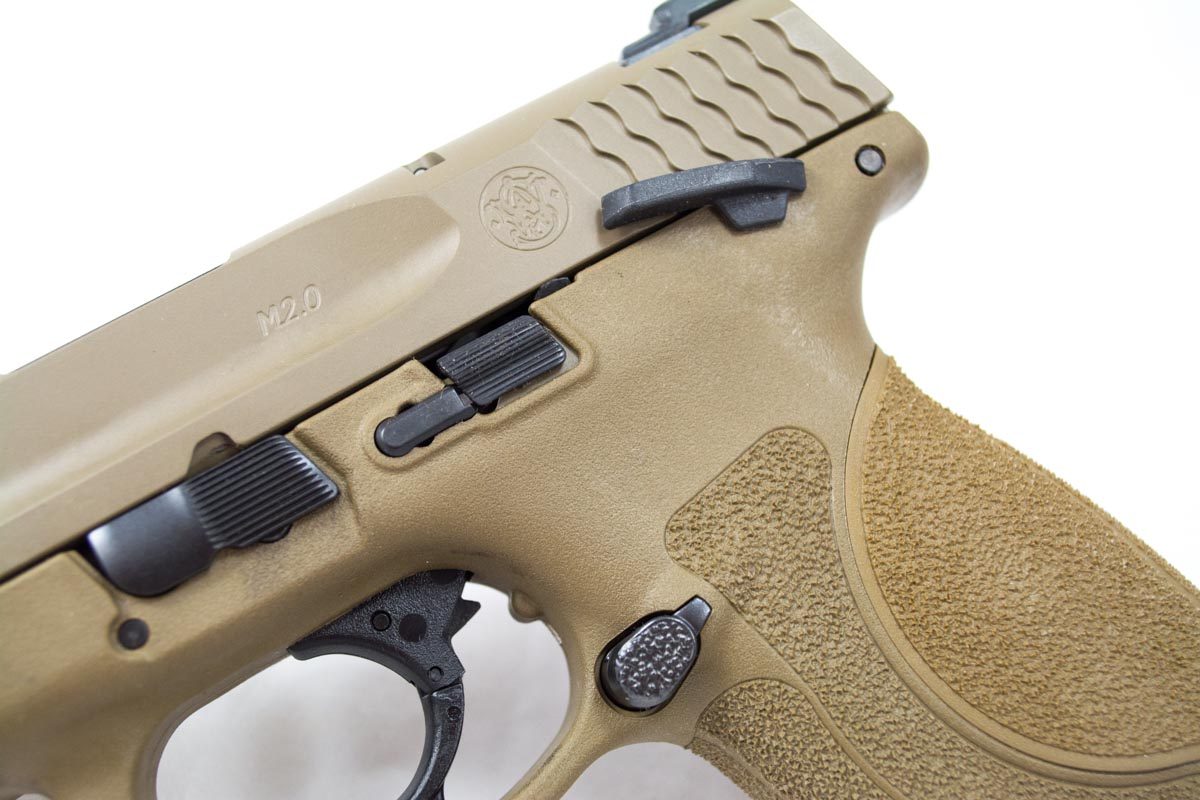 Because the trigger is the big deal on the new models, I’ll talk about that first. If you’ve ever shot any of the M&P 1.0 pistols, know that this one is way better. The two non-safety models had a consistent 5-pound pull weight. Both triggers had just under a half-inch of nearly effortless take-up, followed by about a quarter-inch of constant pressure before a smooth break. I couldn’t detect any stacking of pull weight, and the pressure stage was smooth and not gritty.

The reset is also greatly improved over the first generation models. After about a quarter-inch of release, you’ll feel and hear a distinct reset. If you like to shoot by riding the reset, you’ll like this pistol – the reset is very easy to feel and manage.

The 9mm pistol with the manual safety felt a little different. Pull weight on this one measured a bit more, averaging 6 pounds. The take-up stage was almost identical, and the break and reset were virtually the same as the other models. However, I did feel a gritty shelf during the pressure stage of the pull. It didn’t interfere with my ability to shoot this pistol well, but I did notice it because I was focusing so intently on the trigger operation. From what I can see, the difference in feel and weight is a result of contact with the internal safety mechanism. Just be aware that if you order this variant, you might have a slightly different trigger sensation.

Smith & Wesson has also added a fourth replacement backstrap, so in addition to the one that’s on the pistol, you have three additional choices for which to adjust the grip circumference. Knock yourself out! I just stuck with the standard and was perfectly happy, but I guess I’m easy to please when it comes to customizing the grip size. The new grip texture is aggressive and quite effective.

Speaking of grip, you’ll also notice a new, and much more aggressive, texture pattern. It feels much like skateboard tape, so if you’re one of those who immediately sticks that stuff on your new guns, there’s probably no longer a need. This is actually a bigger deal than it may sound. When shooting the new M2.0 guns, you’ll find that the pistol anchors to your hand. I had no need or temptation to re-adjust my grip during long strings of fire. Pistols with smoother texture patterns tend to move around in my hand a bit, especially with the larger calibers, but this one was rock solid. Do be aware that you might pay the price for that sticky grip texture if you carry inside the waistband. Just be sure to wear a t-shirt between the gun and your love handle area, and you’ll be fine. Oh, the panels with previous models are interchangeable as long as you use the M2.0 tool.

Speaking of interchangeability, the magazines are compatible between the original and new M2.0 versions, so if you have an existing supply, you can use those on the new guns. As such, capacity is classic M&P with the 9mm models holding 17+1 and the .40 handling 15+1. The pistols ship with two magazines in the box. The sights are also compatible, and the dovetail cuts are the same if you chose to add aftermarket sights. Visible through the ports in the dustcover, you can see the extended internal chassis.

Like the trigger system, the internal fire control mount has been redesigned, too. The stainless-steel interior chassis is now longer and extends well into the front dustcover. The idea is to provide rigidity to the frame and improved accuracy.

Cosmetically, you’ll see some differences, too. There are partial front cocking serrations that use the same scalloped pattern as the ones on the rear of the slide. The front serrations are only cut into the lower quarter-inch or so of the slide. They’re present and helpful if you like to use them for press checks, but they don’t get in the way when you’re racking the slide or clearing malfunctions. They way they’re cut also looks like it will keep them from contacting the interior of your holster. The slide cut is a little niftier as well, but that’s an appearance only thing as far as I can tell. The M&P 9 M2.0 model with 5-inch barrel, flat dark earth Cerakote, and manual safety. The front cocking serrations are subtle; useful for a press check, but out of the way.

I’ve been shooting truckloads of ammo through the three guns for handling, function, velocity and accuracy testing.

Function testing was boring. I took all three pistols out of the cases, didn’t do a thing to them, and started shooting. No break-in period was required, and I’m still waiting on a malfunction. They’re all continuing to run like champs.

All three pistols are very easy on the shooter. Most full-size 9mm handguns are relative pussycats to shoot, but there was very little perceived difference between the 9mm and .40 S&W model with these new M&Ps. The other two experienced shooters with me on the range observed that the .40 S&W had just a slight increase in felt recoil. It was easy to shoot and control during rapid fire strings.

I recorded velocity of a variety of ammo with all three pistols using a Shooting Chrony Beta Master Chronograph placed 15 feet down range.

For accuracy testing, I set up targets 25 yards downrange and fired multiple five-shot groups to get an average group size for each gun and ammo combination. I used a Blackhawk III Titan Rest weighed down with a bag of lead shot for stability. Normally I like to use a rail-mounted optic to eliminate sighting error, but the rails on the new M2.0 models are just a hair to narrow for my UM Tactical scope mount. To provide a better indication of mechanical accuracy, I also measured best three shots average for each set of groups.

To add a couple of observations, the 9mm 4.25-inch pistol consistently shot “through” the front dot, meaning that a top of sight post hold resulted in groups a couple of inches below the aim point. Windage was right on, although that’s easily adjusted anyway. The 5-inch 9mm shot right on top of the front sight post, either exactly to the point-of-aim, or 1 inch over at 25 yards depending on bullet weight. The 40 S&W pistol also shot right on top of the front sight post. The moral of the story is test your gun and ammo, so you know exactly where it shoots and adjust if necessary.

The MSRP of the new models is easy to remember – $599 across the board. I suspect as we see upgraded models, say with night sights or threaded barrels, we’ll see some variance there, but for now, that’s the price for all calibers and sizes.

I like the new models. The grip texture is great, and the trigger is a welcome improvement over the originals. I’m probably going to send a check for at least one of these and maybe two. My personal preference is for the “no manual safety” models, but that’s personal preference, not a reflection on the design.