The Q Silencer Full and Half Nelson suppressors are both .30 caliber rifle models, one full size and the other compact.

Update: Given the tragic and cowardly attack in Las Vegas, what appeared to be smooth sailing through Congress is now a big question mark. Stay tuned.

Yeah, I know, those idiots in Washington can’t vote themselves a Spam sandwich for lunch, but I’m still optimistic about passage of the Hearing Protection Act.

There is no reason whatsoever that this can’t pass and it will certainly get signed if those self-absorbed blowhards can manage to call a vote. Being optimistic about the forthcoming suppressor-lanche, I decided to check out some new ones.

There is no reason whatsoever that this can’t pass and it will certainly get signed if those self-absorbed blowhards can manage to call a vote.

Being optimistic about the forthcoming suppressor-lanche, I decided to check out some new ones.

Thanks to the good folks at Silencer Shop, I got my hands on the latest from Q Branch or just “Q” for short. If you’re not familiar with the Q company, they’re hell-bent on revolutionizing the silencer and tactical rifle markets. They also have quite the sense of humor. If you buy either of their “World Famous Nelson Brothers” Full or Half Nelson suppressors, you get a free dose of entertainment right in the box.

You’ll spot these models on the restricted toys shelf right away as the packaging reflects the “Q Seacoast Wrestling Alliance.” Images of large guys wearing robes, wrestling briefs, and Lucha Libre masks liberally adorn the box and its interior. Heck, you even get an extra Lucha Libre soft sleeve for your new silencer. You can also figure out that the Q folks like to have some fun when you check out the obligatory warranty and legal enclosure. It’s labeled “Here comes all the lawyer shit.”

Not your typical product packaging, and that’s refreshing. 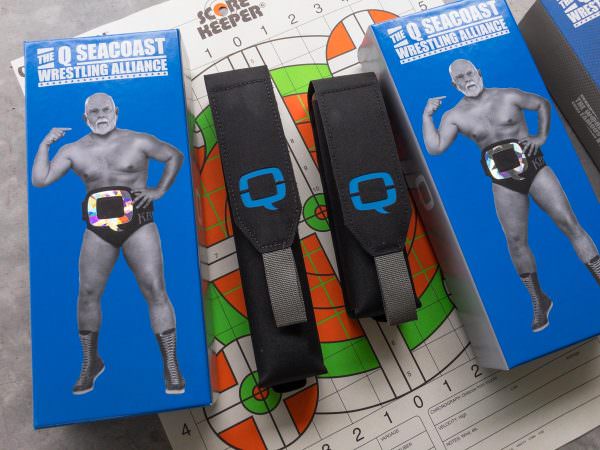 The Q Silencer packaging most definitely stands out from that of typical suppressors.

These two related Q Silencers offer you a tradeoff between size and noise reduction. The >Q Silencer Full Nelson is a full-size 7.62mm suppressor that measures 8.9 inches long with a diameter of 1.75 inches. It weighs in at just over a pound – 16.6 ounces. Presumably, that’s not counting the pre-match weigh-in crash diet and diuretic overload. The >Q Silencer Half Nelson is only 6.85 inches long and shares the same diameter as its longer sibling. It weighs 12.2 ounces.

Both Q models are constructed entirely of Titanium and are sealed, so you can’t take them apart. However, as heavy-duty rifle suppressors, you don’t need to – they’re self-cleaning as long as you feed them a frequent diet of standard velocity ammo. If you shoot subsonic loads, like 300 Blackout, then just be sure to work some supersonic time as well. You’ll notice by the rings and weld marks on the exterior that these have no enclosing tube. Instead, the baffles are welded together directly to form the tube itself. Less metal, less weight, and more interior volume are the benefits. 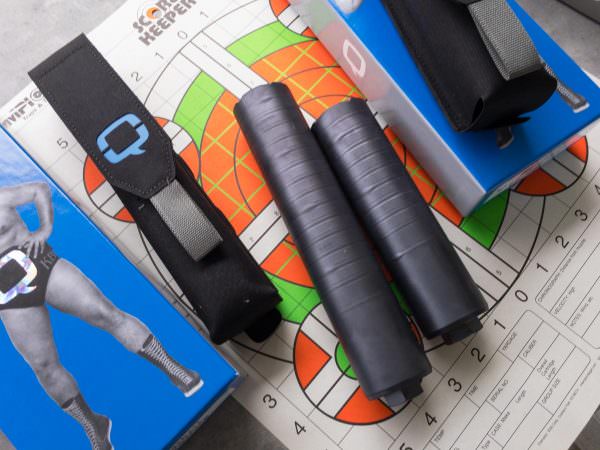 The Q suppressors have no separate outer tube, that’s formed by welding the baffles together.

The difference in sound suppression between the two Q models depends on pretty much everything, including barrel length, caliber, and ammo, but you can assume an approximate 10dB difference between the two models. The factory quotes the following noise levels as a guide.

Here’s a nice touch. The base of the the Q suppressor features a 7/8 SAE nut for easy mounting. There’s enough thickness to that mounting nut to use a standard wrench if you like. Better yet, use a torque wrench to get the tension right. We’ll come back to that in a moment. You might also notice that the muzzle has a very discreet shape compatible with ¾ SAE wrenches. That’s there in case your suppressor fits under the hand guard, and you don’t have easy access to the rear nut. You can tighten and loosen the Q Silencer Nelsons using only the muzzle nut. 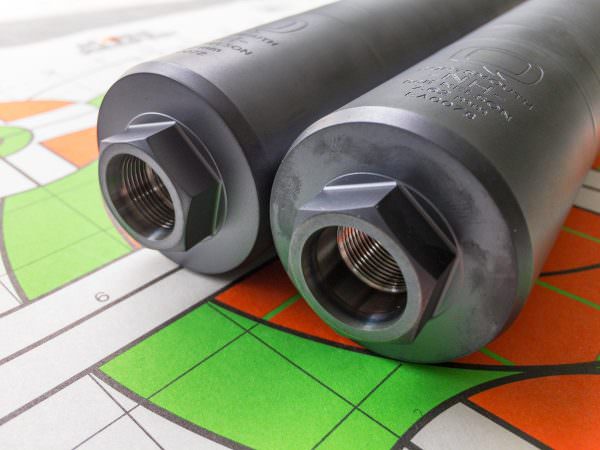 Note the tapered area behind the interior threading on the Q Silencers.

The Q Silencer Half and Full Nelson suppressors use a 5/8×24 direct thread mount, but with a taper just outside of the threads. That taper exists to take advantage of newer threaded barrels with a matching tapered profile just behind the barrel threads. The combination of threading and the taper helps eliminate tolerance stacking, so the Q suppressor is more likely to mount perfectly straight, and that minimizes the risk of baffle strikes. The taper in the Nelson suppressor mounts is also compatible with standard threaded barrels. The tapered section inside the mount simply fits over the flat shelf behind the barrel threading. Do be aware that you want to use different torque depending on whether your barrel is tapered or not. The enclosed manual, also written using simple and fun terminology like “righty tighty” clearly outlines how much torque to apply for both barrel types. 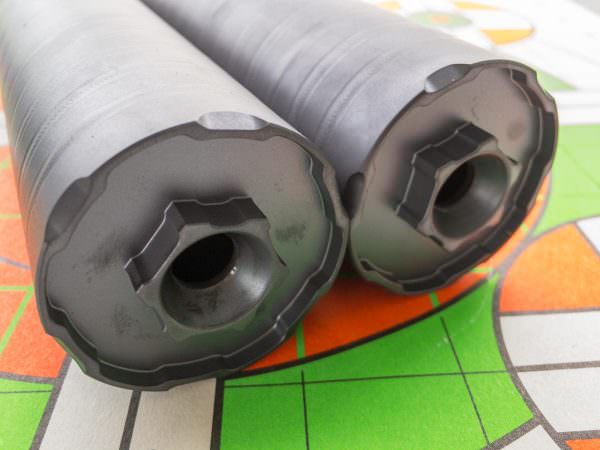 The shaped muzzle cap can also be used for mounting. That’s handy if the suppressor goes under the hand guard.

Direct thread mounts are just fine with me because I don’t particularly care whether a suppressor has a quick attach/detach mount. Because zero changes when I add or remove a suppressor, shooting in both suppressed and unsuppressed configurations is not something I do anyway. In my use case scenario, I might move the same suppressor to different rifles, knowing that each is properly zeroed when that silencer is mounted. Whether it takes me three seconds to spin one on the muzzle using a direct thread mount or a hair less time to snap it on with some quick attach system is largely irrelevant.

With that said, much of the reason for using quick-attach mounting systems is that the suppressor goes on exactly the same way every time you mount it, so the zero remains the same. If you take your silencer off and move it to another rifle for a while, then re-mount it, it should have the exact same point of impact as the previous installation. 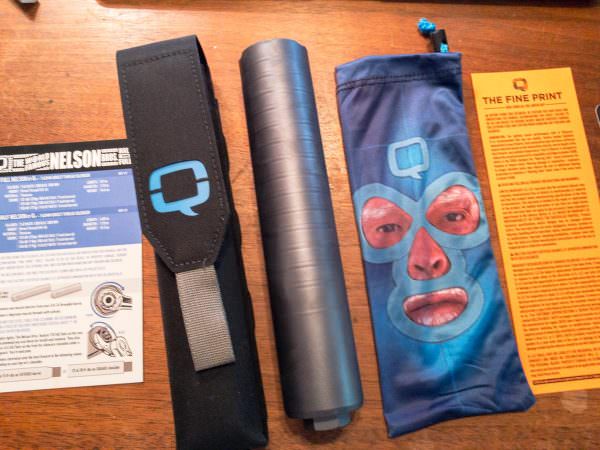 The Q Silencer Half and Full Nelson suppressors come with a fun soft bag and sturdy carrying pouch.

I tested both models with the new Smith & Wesson M&P 10 Performance Center rifle chambered in 6.5mm Creedmoor. It’s a shooter and easily groups well under an inch at 100 yards when shooting five-shot strings.

I wanted to check out the initial point of impact shift with the Q Silencer Full and Half Nelson suppressors. Adding any suppressor is going to change the zero because sticking that weight on the end of the barrel completely changes barrel harmonics. That’s expected, and fine provided that the zero remains the same every time you re-attach the suppressor. 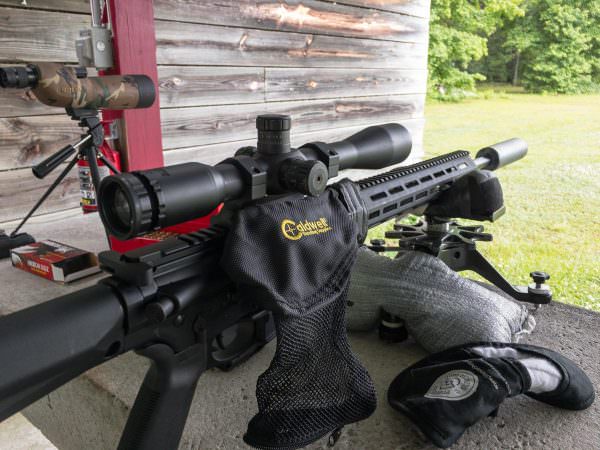 I tested the Q Full and Half Nelson suppressors with this Smith & Wesson Performance Center M&P 10 chambered in 6.5 Creedmoor. Note: I used the Caldwell Shooting Supplies AR-15 Brass Catcher to prevent having to bend at the waist.

I started by firing three shot groups with two types of ammo: American Eagle Open Tip Match 140-grain and Hornady Match 120-grain A-Max. For these initial groups, I used no muzzle device at all. That’s where things got interesting. As I mentioned up front, this M&P 10 Performance Center Rifle has been a proven tack driver. On the other hand, I’ve almost always shot it for accuracy using a suppressor, or at least a flash hider. With nothing on the muzzle, the groups opened up – noticeably. My three-shot group using American Eagle’s Open Tip Match 140-grain bullet measured 1.67 inches. The same scenario with Hornady Match 120-grain A-Max measured 1.61 inches.

Those are the largest groups I’ve ever gotten with this rifle. For whatever reason, this rifle likes to have something on the fiery end. 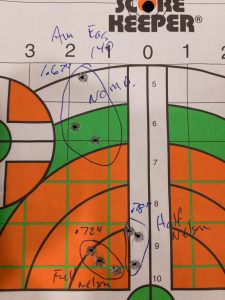 I fired three-shot groups to measure impact shift when the suppressor was mounted. Notice how much the groups tightened up.

Anyway, I fired it sans muzzle device at 100 yards to establish a point of impact before adding the Q Full Nelson and Half Nelson Suppressors. When I added the Full Nelson, the three shot group moved down 3.5 inches and to the right about ½ of an inch. The group also tightened up considerably, measuring just .72 inches. I then removed the Full Nelson and mounted the Half Nelson, making no scope adjustments. That group landed in almost exactly the same place vertically, but about ½ of an inch to the right of the Full Nelson group. It was also tight, measuring .78 inches.

I repeated this test using the Hornady Match 120-grain A-Max ammo, again from the same 100-yard distance. The group without a muzzle device measured 1.61 inches. When I added the Full Nelson, the group moved down two inches and one inch to the right. It also shrank considerably and measured .69 inches. The Half Nelson group was pretty much right on top of the Full Nelson group and measured .91 inches.

Adding and removing the suppressors had no effect on the point of impact. Once I zeroed the rifle with the suppressor mounted, I could take it off and remount it without losing my original point of aim to point of impact relationship. That’s exactly how it should have behaved. Since I have no need for shooting this rifle without the suppressor, the direct thread mount is a non-issue. Besides, it takes just a couple of seconds to mount and dismount.

Both suppressors made a noticeable difference in negating felt recoil, and I couldn’t really feel a difference between the two. I was able to detect a noticeable noise difference when I switched to the Half Nelson, but that was expected. I would seriously consider using the Full Nelson model on a big caliber rifle like a .308 and the Half Nelson on something like a shorter barrel 300 Blackout. Its compact length would make it a great permanent addition to a short rifle.

These suppressors are built like tanks and would serve as impact weapons or a really expensive hammer in a pinch. Cool stuff. You can get them both at Silencer Shop.