People of the NRA Annual Meeting Elvis is risen! At the NRA Annual Meeting…

I have a serious love/hate relationship with the NRA Annual Meeting.

The hate part is easy – it’s always a logistical nightmare. Hosted in cities that are completely unprepared for 75,000 instant hotel-stayers, hotel rape is rampant. If you can find a room downtown, it’ll cost ya north of $300 a night for a flea palace. If you choose to save money and stay 30 miles away, you can count of a good adventure getting into town and parking.

The love part is also easy. It’s the people. I challenge you to find any other group of 75,000 or so, polite, respectful, and downright interesting people. The aisles are crowded, and bumper-people is inevitable, but you’ll hear hundreds of “pardon me’s,” “excuse me sirs.” and “sorry’s” each time you navigate the crowds on the show floor. You’ll see families, politicians, and most likely The Nuge.

This year I thought you might enjoy a photo essay of some of the interesting people of the National Rifle Association Annual Meeting. 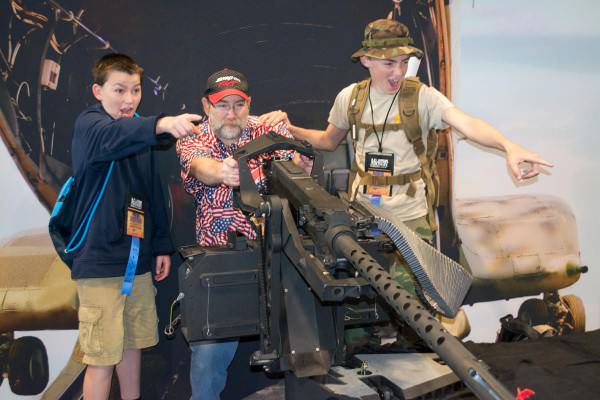 Ray takes out a horde of evil doodz, with serious help from assistant crew chiefs Nathan (left) and Malachi (right). I think they might be having a little too much fun in what’s obviously a war zone…

I always love meeting random families from all over. This year, a father and his two sons caught my eye at the FN America booth. They were checking out a big helicopter-mounted ma deuce that was available for inspection and fantasizing about being a tail gunner.

I knew we had a lot in common. They were at the NRA Annual Meeting. They were checking out cool military guns at the FN America booth. That’s enough to strike up a new friendship, right? It works for me.

What got my attention was Ray’s shirt. It’s seriously patriotic as you can see in the photo above. When I asked him about it, he told me his wife Rebecca made it. He wears it a lot, not just to display his American pride, but at large events, it makes it easy for his kids to find him. While I met many “Rays” at the NRA Annual Meeting, this new friend encounter is a perfect example of what I love about the event. You can literally strike up a conversation with just about anyone. It’s a really, really friendly crowd. 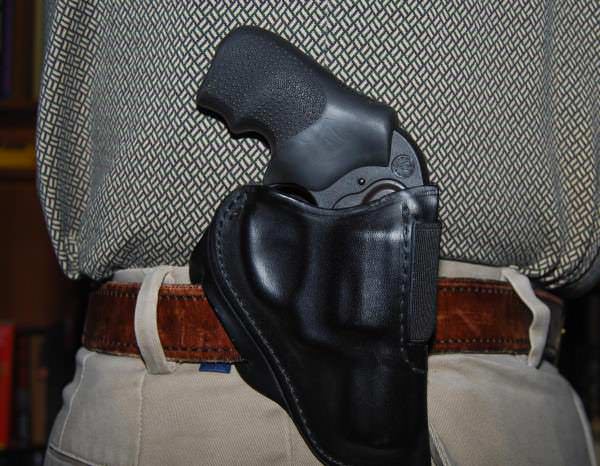 While there’s no way to know for sure, I would guess several thousand attendees were carrying concealed at any given time. I’ve never felt safer.

I do love that the NRA members put their money where their mouth is. Concealed carry is legal in the Music City Center per Tenessee state law, so there are literally thousands of people carrying concealed guns in the exhibit hall and surrounding street exhibits.

I’ll bet there are more guns per square foot here than Kanye West tasteless gaffes at a music awards show.

But do you know what? There’s no crime. No one freaks out and starts shooting people. None of the convention hall people crashes escalate into gunfights. The anti-gunners must think this is an actual miracle. We know better. It’s just a large group of responsible, respectful and law abiding people. Yep, it’s that simple.

Every year I wonder how much it would freak out anti-gun politicians and tyrannical little ex-Mayors to know that hundreds of VIPs and celebrities are shuffling through the exhibit halls with us regular folk, even though they are literally surrounded by people with guns! Gah! None of these VIPs ever look very concerned to me. They know they’re in law abiding company and arguably the safest place in the known universe.