A Pair of Suppressors To Cover Multiple Guns 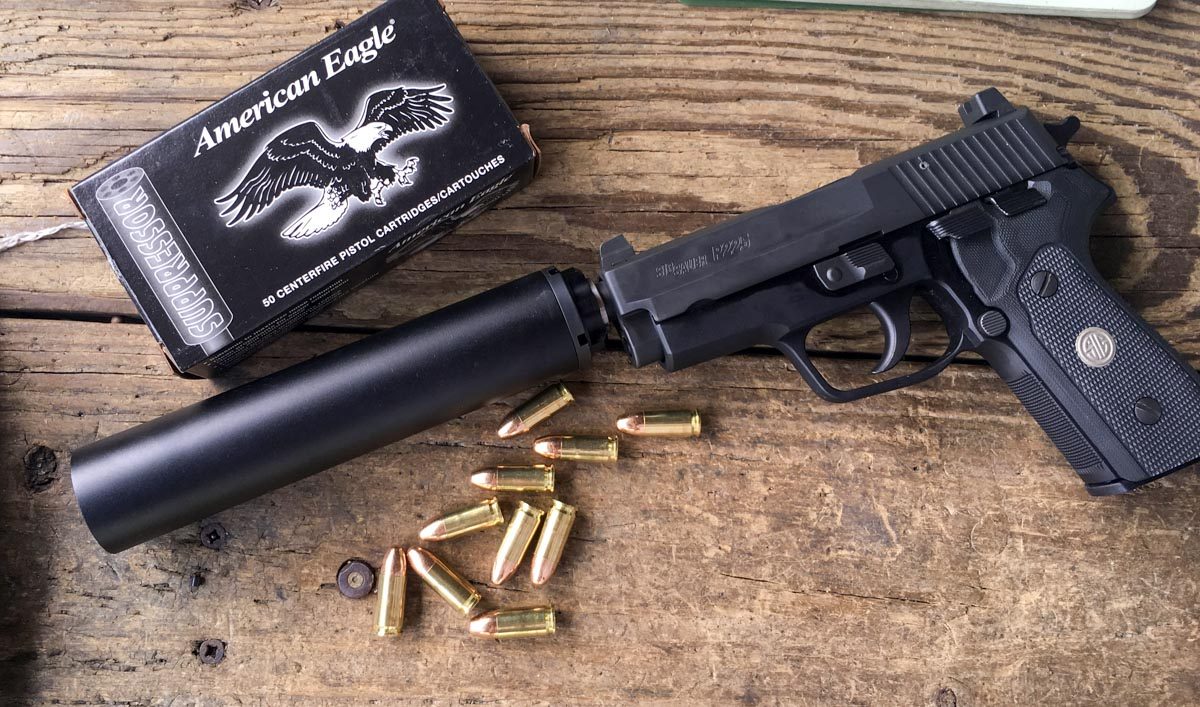 This Griffin Armament Resistance 9 was a great pairing for the new Sig Sauer P225 A1 threaded model.

USA –-(Ammoland.com)- Until the day that President Obama signs the Hearing Safety Act which would remove suppressors from National Firearms Act Restrictions (and I have it on good authority that it’ll be the same day that rabid monkeys fly out of my butt), we have to spend lots of time and treasure to shoot with the sound of silence.

While a large part of the overall cost goes to Uncle Spendy in the form of the current $200 tax stamp, at least the onerous process of buying is getting easier for the most part. With the implementation of ATF Rule 41 F, buying a silencer is a bit easier for individuals.

While pain in the neck stuff like fingerprints, photos, and plenty of paperwork are still required, the folks at SilencerShop have implemented a new program to shield you from all that government complexity. We’ll talk more about that at the end.

For now, let’s take a look at how to get maximum silence for your gun collection with a minimum of tax stamp investment.

There are two things to consider when figuring out what you can shoot through any given silencer. 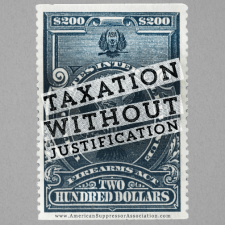 First is the caliber, or how big is the hole in the front? With exceptions related to what we’ll talk about next, generally speaking, you can shoot smaller calibers through a suppressor designed for bigger calibers. For example, if you buy a .308 suppressor, you can shoot the .30 caliber cartridges like .308 Winchester, 300 Blackout, 300 Win Mag, .30-06, and so on. You can also shoot smaller diameter calibers like 6.5mm Creedmoor, .270 Winchester, and even .223 Remington.

Technically, you can even shoot .22LR, although there are reasons you may not want to do that.

The same applies for pistol suppressors. If you buy a .45 ACP can there’s no reason you can’t also shoot .40 S&W, 9mm, and .380 ACP through it. The only drawback to this “buy a bigger suppressor” approach is extra size and weight if you’re shooting a smaller caliber.

Second, and just as important, you have to consider the structural integrity of the suppressor. While the hole may be big enough for a .30 caliber bullet, the silencer itself may not be built for pressures of some rounds in that caliber family. For example, if you buy a 300 Blackout specific suppressor, you may not be about to shoot 300 Win Mag through it. Your vendor will clearly specify limitations like this. While you’re checking that out, you’ll also find notes and restrictions on things like whether the suppressor is rated for fully automatic fire. One more specification to note is minimum barrel length. The shorter the barrel, the more heat and pressure that will affect the suppressor. Again, manufacturers will be clear about this. Or, just ask the Silencer Shop folks before you buy. They’ve done boatloads of research and testing and can steer you in the right direction.

Griffin Armament makes two models of the Resistance suppressor, one for 9mm and the other for .45 ACP. As discussed, you can shoot smaller calibers through either. If you buy the .45 ACP model, you’ve got all the major semi-automatic pistol calibers covered. The only tradeoff is size and weight. While the Resistance 9mm is 6.7 inches long and weighs 10.2 ounces, the .45 ACP version adds 1.2 inches to length and 1.4 ounces to the weight. The diameter of the tube is 1.375 inches on both models. I tested the 9mm version here, but construction and features are identical.

The Resistance is built from both 7075 T6 Aluminum and 17-4 Stainless Steel. The idea is to use lighter weight and less expensive aluminum on parts that don’t have to suffer constant abuse like the suppressor body. Inside, you’ll find stainless steel because that’s what has to endure repeated exposure to blistering hot gas and other residue projecting out the fiery end.

The Resistance is easy to disassemble so if you shoot dirty stuff like lead bullets or rimfire, you can clean the carbon and lead out.

The Resistance is designed to be user serviceable, meaning you can easily take it apart for cleaning and maintenance. This is important because pistol suppressors get dirty inside. Unlike rifle caliber silencers where the extreme pressure and temperatures tend to make the suppressors more or less self-cleaning, pistol-caliber cans collect carbon and lead if you shoot rimfire or lead centerfire bullets. The Resistance disassembles by unscrewing the end caps. Inside, you’ll find a stack of separate baffles. One nifty design feature I noticed is that each baffle has tiny little notches which make them stack together in just the right orientation. If you don’t pay attention to lining up those notches, the baffles won’t fit properly, and you won’t be able to screw the end cap all the way in. I thought that was a clever and idiot-proof design feature.

I tested the Resistance mostly with a brand new Sig Sauer P225 A1. This mid-size single stack can be ordered with a threaded barrel and tall suppressor-ready sights, so that’s exactly what I did. It didn’t occur to me until I started shooting, but a mid-size gun like this makes for a great suppressor host. Think about it. You’re adding a lot of length and weight to your pistol, so if you start out with something more compact, the overall package is much more manageable. The Sig P225 A1 and Resistance 9mm were a perfectly proportioned match.

Oh, one more thing. The Resistance is rated for 300 Blackout (subsonic only) so you can stick it on a rifle or SBR of that type. It’s also rated for full auto operation.

The Griffin Armament covers the pistol calibers, so I also borrowed a Thunder Beast Ultra 7 for .30 caliber and smaller. It’s rated for .300 Win Mag and anything less powerful, and the company is very clear about minimum barrel lengths for various caliber configurations.

I chose this particular model for its compact size and good suppression performance. Many .30 caliber cans are built like Louisville Slugger baseball bats with size to match. This one is only seven inches long as the name implies. When shopping the Thunder Beast line you’ll note that they make related models in five and nine-inch lengths too. Just pick your desired combination of suppression effectiveness and size. Those two things are generally inversely related.Griffin Armament,

The Ultra is made entirely of Titanium, so it’s not only tough but light. It weighs just 9.7 ounces when using the quick detach flash hider mount. Note that it weighs less than the Resistance pistol suppressor. Speaking of the mount, you can equip this one as a direct thread model (which weighs a bit more) or with the quick detach option that mounts onto a CB series muzzle brake or compact flash hider. I used the flash hider option.

One of the most attractive things about the Ultra 7 is the compact size and light weight compared to other 7.62mm suppressors.

Like many rifle-caliber suppressors, the Ultra doesn’t disassemble by design. Shooting rifle calibers tends to be a self-cleaning operation. If you shoot a lot of subsonic ammo, just “clear it out” with supersonic loads periodically and you’ll be fine.

I shot the Thunder Beast Arms Ultra 7 with a variety of rifles including a Rock River Arms LAR-68 (6.8 SPC), Daniel Defense DDM4v5 300 Blackout, and a Masterpiece Arms BA Lite PCR chambered in 6.5mm Creedmoor. On all three rifles, I really appreciated the small size in comparison to most .30 caliber suppressors. On the AR’s, it kept the overall length as compact as possible and made handling easier. The Masterpiece Arms rifle is a monster beast to start with (and that’s what makes it so cool) so preventing addition of any extra weight or length was a good thing too. While difficult to describe in words, the suppression was great, especially considering the size. According to Thunder Beast, firing a bolt-action .308 through it generates about 134 dB.

I did some point of impact testing to see if that varied when I changed configurations from suppressed to unsuppressed. First, I shot a 100-yard group with only the flash hider attached to the Daniel Defense DDM4v5 rifle. I then added the suppressor and shot another group, also at 100 yards. Both used Sig Sauer 120-grain GR ammo. There was no point of impact shift – at all. I then removed the can and shot some without it, then remounted the can to see if there was any detectable change in zero. The next group centered about 1/3 of an inch off from the earlier ones – straight below. The lack of impact change was about the best result I’ve seen on a rifle suppressor.

This one is certainly not the least expensive rifle suppressor on the market, but I really liked the way it was built. I should also add that Thunder Beast Arms Cerakotes the exterior. As you can see, the one shown here was a desert tan finish. 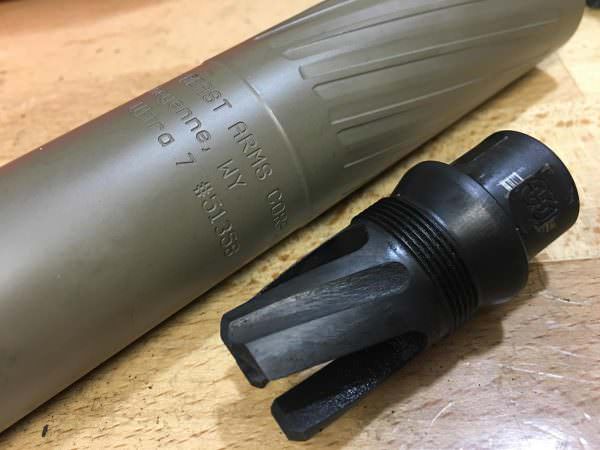 I tested the Thunder Beast Arms Ultra 7 with the compact flash hider mount.

The folks at Silencer Shop have gotten all creative and high-tech and figured out how to handle most of the burden of suppressor paperwork, fingerprints and photos. If you buy yours from them online, you’ll get a security code which you can then use at one of the hundreds of SilencerShop kiosks around the country to capture your fingerprints digitally. SilencerCo stores this info along with your paperwork details so they can automatically submit everything you need. The only other thing you’ll need to do is use the Silencer Shop smartphone app to snap a photo of yourself. That’s also uploaded to the packet that the company assembles on your behalf. The best part is that once you complete the process once, all the information is ready to go for future purchases. Check it out here.