Day 3, while a bit quieter than the first two days of the NRA Annual Meeting, had plenty to offer. Here are a few of the interesting finds.

The Story Behind the Galco VHS Holster and Beretta M9

Part of the fun of wandering the halls of the NRA Annual Meeting is learning interesting back stories. Way back in 2005, troops deploying to overseas combat zones were buying Galco’s VHS (Vertical Holster System) for their issue Beretta M9 pistols. Why the Galco VHS? When zipping around foreign countries in helicopters, handguns must be carried in a muzzle down orientation, which the VHS is designed to do. In early 2005, Galco was temporally sold out of the holster due to the large number of troops deploying. A customer called in to order one for “civilian” use and was told they were backordered and the reason why. He ordered his holster, then asked if he could pay for an “extra” that Galco would donate to a soldier headed overseas. The light bulb went on and the folks at Galco started theHolsters for Heroes program. Donations flowed in and over $100,000 worth of holsters were given to our men and women in uniform.

Now you know the rest of the story.

In the midst of the total chaos known as the NRA Annual Meeting, I was fortunate to get a tour of the new Burris offerings from Marketing Director Lori. What jumped out at me was the XTR II. Here’s why. 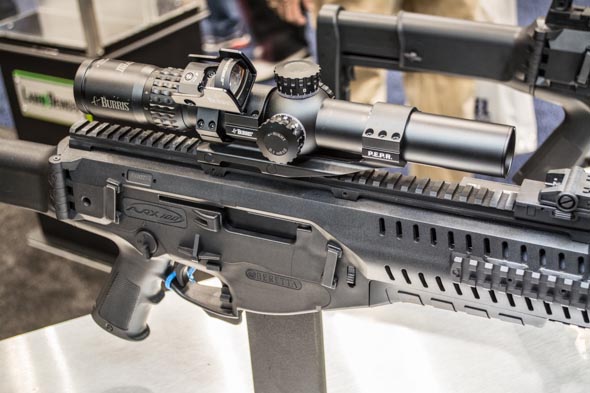 The new Burris has a lit horseshoe reticle in the second plane, so it stays the same size for quick short-range shots at any magnification. The ballistic drop compensation pattern is in the first focal plane, so 400, 500, 600 and 700 yard hold points are accurate at any zoom level.

The mounted FastFire Red Dot is useful for quick, shorter range shots. it’s also a great way to spot distant targets. Get in the vicinity using the FastFire, then shift your eye to the scope for a magnified view.