OK. I’ll admit it. I wasn’t impressed until I tried this pair of Blackhawk! TecGrip holsters

USA –-(Ammoland.com)- Can you teach an old dog new tricks? And by “old dog” I really mean me. And by “new tricks” I mean new, but safe and effective concealed carry methods.

You see, I think I might be a holster racist. If I’m not a full-blown concealed carry bigot, then I at least have a bad case of extreme holster prejudice.

What does that mean? According to Dictionary.com, you can think of “prejudice” as “an unfavorable opinion or feeling formed beforehand or without knowledge, thought, or reason.”

In fairness, I’ve given plenty of thought to concealed carry and all the associated holsters. More than that, I’ve invested more money than the Clinton Crime Family Foundation has received in shady donations on all variety of holsters and latest and greatest carry gimmicks. Heck, I’m such a holster geek that I wrote a whole book on concealed carry holsters. Yes, I’m that much of a holster nerd.

Anyway, back to the point here. Having tried all the new gear, year after year, and faced disappointment time and time again, I tend to make opinions on new holster designs, favorable or not so much, based on appearance alone. So that’s my holster prejudice confession.

To share a specific example, I’ve walked right by the booths of new holster makers that offer a less than conventional approach for a couple of years now. Hey, I’ve done this holster thing, so I know what will work and what won’t, right? So as to not insult anyone, let’s call this new holster company “Adhesive-ey Holsters.” The basic idea of their offering is that a holster pocket for the gun is designed in such a way as to “stick” to the inside of your pants. No belt loops, back panels or other attachment gizmos are required. It’s kind of like a pocket holster covered with some type of “as seen on TV” material that sticks to anything including Teflon and White House Press Secretaries.

To make a long story short, I figured out long ago that these don’t work, even though I never tried one. There’s no way they’re going to stay in place through one’s daily travels. They don’t require a gun belt, and that’s holster heresy!

Fast forward to a few weeks ago. I flew out to the Great State of Montana to visit the folks at Blackhawk!. You’ve probably heard of them because, among a billion other types of gear, they make lots and lots of carry holsters. On Day Two of our New Gear University Program, my old friend Chuck walked the class through the new Blackhawk! Holster designs

I’ve known Chuck for years, and we almost always agree on stuff, mainly because he’s a holster snob too. However, when Chuck whipped out a pile of new “Adhesive-ey Holsters” I knew they were a terrible idea because they didn’t have required components like belt loops or even clips. Clearly, Chuck had spent too much time in close proximity to the leather dye fumes, so after calling his wife to express my condolences, I challenged him on this thing. “Chuck, come on, I know you’ve got shareholders to satisfy, but seriously, have you no shame? You might as well quit this job and go into personal injury law.”

Chuck proceeded to try to convince me of the wisdom of this idea by claiming that he was opposed to it too, until he finally agreed to shut up the very persistent engineering team by giving them a try. “They really work!” he said. “I’m not sure I can tell you why, but they really do. I was surprised too!” Feeling sorry for him, being that he was dying from brain atrophy associated with Mad Holster Disease and all, I promised to give them a try. I figured it was the least I could do for an old friend during his last days of diminishing holster geekery.

. These come in nine different shapes and sizes to fit a variety of guns from a pocket auto to five-inch barrel, full-size semi-automatic pistols. You’ll find plenty of options for revolvers too when you check out the size charts. 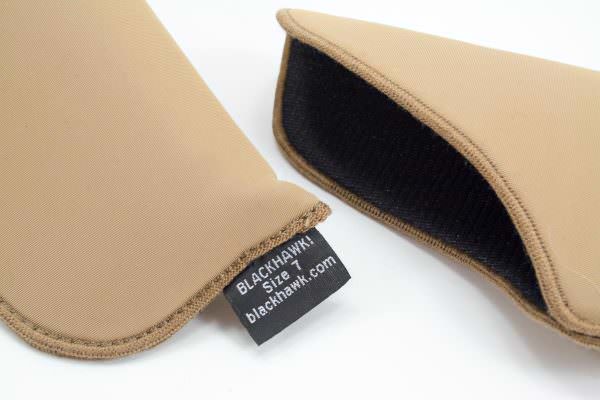 The exterior surface looks like some type of finely-woven nylon.

The entire holster is constructed from three different layers of material which are heat-mashed together. That’s my word for “melted into a permanent bond” so they won’t come apart over time. The key to the TecGrip is the exterior material. You might assume it’s sticky, as its primary purpose is to bond firmly to your clothing to prevent movement. However, it’s not at all sticky. In fact, I’m at a bit of a loss to describe the feel of the material with words. It’s a little bit like fine sandpaper, but not abrasive. It’s also somewhat like Velcro that’s been smashed flat. When you run your fingers across it, it feels like a very tightly woven nylon material made with extremely fine thread. Whatever it does feel like, it’s most certainly does not feel like the business side of duct tape.

However, once it contacts another surface, it grips. Maybe it’s a similar principle to insect feet. They seem to be able to stick to pretty much any surface, but I’ve never looked at spider toe construction up close, so don’t rely on that analogy as a scientific explanation. As you would expect, it latches onto fabric as if it were glued. The really weird thing is that this holster material latches onto smooth materials like glass and the finished wood surface of my desk. I’m guessing that if you looked at this stuff under a high-powered microscope, you might see billions of little grippy fingers that embed into billions of little pores on the opposing surface. But that’s just an educated guess on my part.

Since returning, I’ve been wearing two of these holsters almost daily. I’ve been using the Size 7 model

with a Sig Sauer P320 chambered in .357 Sig. Neither of these pistols is particularly small or light, which was why I chose them for the test. If this holster is supposed to stay put, I figured lugging around heavy, fully loaded pistols would either prove or disprove that point.

What did I find? Well, umm, they actually do work. Very well I might add. Since they grip clothing like Nancy Pelosi latches onto microphones, you need to place them into position before tightening your pants and/or belt. You’re not going to have much success forcing them down into an IWB carry position as you might do with a conventional holster. After all, they’re designed to stick, so you’re going to run into some serious resistance if you try to jam it into position. I found the easy way was to unsnap my pants, then place the gun and holster where I wanted before tightening up the pants. Once there, it didn’t move. At all. In fact, I wore the TecGrip rig with the Sig P229 Legion all Independence Day. With triple-digit heat, 493% humidity, and several miles of walking and crowd dodging throughout the day and evening, this thing stayed put – there wasn’t one millimeter of detectable movement.

The design opens up some alternate carry possibilities. The belt is not a required element. As the entire surface sticks, you aren’t relying on pressure and tension to support the weight of the gun. Friction along the entire surface, on both sides, takes care of that. As a result, I suspect this could be an interesting option for clothing scenarios where there is no belt. Women’s skirts or suits come to mind. Men’s or women’s exercise clothing or casual wear is another possibility. Don’t get me wrong, your clothing still needs to be snug and provide support. Of course, a good belt only helps – I’m just pointing out the fact that the belt isn’t mandatory.

In addition to wardrobe flexibility, the holster offers the benefits of a minimalist approach. There’s not much there to add dimension and weight to the gun, so it’s light, discreet and thin. Since there are no loops or mounting gear, you can put this anywhere and cant adjustments are infinite. Whether you carry strong side hip, towards the small of back, appendix, or crossdraw, the holster doesn’t care. On the flip side, there’s nothing like a reinforced mouth, so to re-holster, you’ll need to remove the holster, re-insert your gun, and remount the package. If you ever have to draw in self-defense, you’re probably best off laying your gun on the ground and standing on it as the police arrive. That’s OK as long as you recognize that tradeoff going into your choice of holsters.

Hey, just one more thing. Can we keep this between us? If Chuck ever catches wind of me admitting I was totally wrong, he’ll mock me for the next decade.