This UM Tactical Pistol Optics Mount comes in handy for accuracy testing guns and ammo. I keep a Bushnell 3500 Handgun Scope on it for that purpose.

There’s always something new and cool on the market. People like you and I often get excited about something or another because it seems like such a good idea, or so handy, or maybe it’s such a great deal. Like most other product categories, shooting gear must pass the test of time for it to make the true favorites list. Once the shiny new novelty wears off, do you still find the same value from that piece of gear? Here are a few shooting accessories that have survived many of my ruthless range bag reorganizations.

We all put in an hour or so per day of dry-fire practice, right? What? You don’t? Well, disregarding the fact that we have plenty of other things to accomplish and that dry-fire practice has been known to induce boredom comas, some slippage in the daily schedule is understandable.

Here’s something that’s made practice either at home or the range much, much more interesting and effective. The MantisX Shooting Performance System consists of a small, light, and rechargeable device that you mount to the rail of your pistol and a smartphone app. As you might guess, these two things communicate. Oh, if your gun doesn’t have a rail, check the MantisX.com website – they offer adapters. 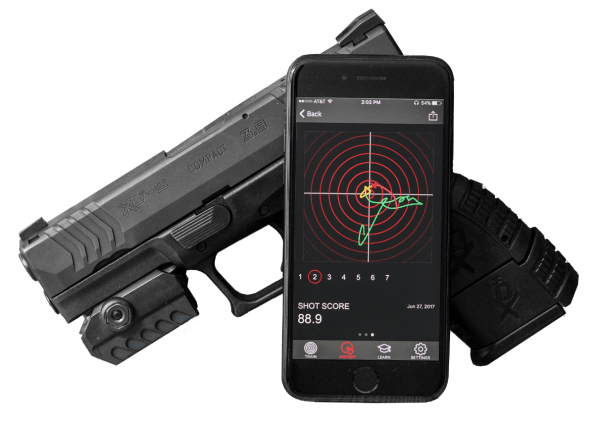 The MantisX system uses Bluetooth to send performance data to a smartphone app.

Anyway, the MantisX has magic sensors that detect the slightest movement prior to, during, and immediately after the trigger press. This data is sent to the smartphone app so you can see what you’re doing graphically. The app also assigns numerical scores to each shot based on the amount of movement through your shot. The company has been continuously updating the app so it now includes structured drill and training routines you can use to measure progress against skills over time. You can also set up accountability groups with friends to share results.

Here’s what makes it extra super nifty. Not only can you hone your skills dry-firing at home, but you can also stick this on a CO2 pellet or BB pistol to simulate some noise and recoil. Lose the pellets, and you can shoot blasts of air inside your house, at least when your spouse is out running errands. Better yet, take it to the real range and run it with live ammo. It’ll tell you exactly why you’re hitting or missing.

I’ve been using the UM Tactical Pistol Optics mount for a couple of years now, so it’s proven its utility over the long haul. Here’s what it does.

The device hooks to the rail under the muzzle and wraps around both sides of the frame and slide, without touching, meeting again maybe a half-inch over the slide. At the top, the two halves join to form a Picatinny rail segment on which you can mount a red dot sight or magnified handgun scope. Since nothing touches the slide, your pistol functions through recoil normally and the rail and mounted sight don’t move at all.

Being able to mount a red dot sight on a pistol not originally designed for one is cool and plenty of fun. Mounting a magnified handgun scope on your favorite pistol opens up all sorts of possibilities. If you’ve got an accurate gun, it’s no big thing to hit targets 100 yards or farther with ease. I use it for precise accuracy testing at 25 yards because the scope completely removes the issue of shooting sighting error. It also makes an interesting solution for long-range plinking or hunting provided you have the right caliber/game match.

Sometimes the simplest things are the handiest. That also can (rarely as in this case) apply to the least expensive things. While I’m sure, you can find magazine pouches for a few pennies less (the MSRP of these guys is $26.00) it’ll be hard to match the durability and usefulness. 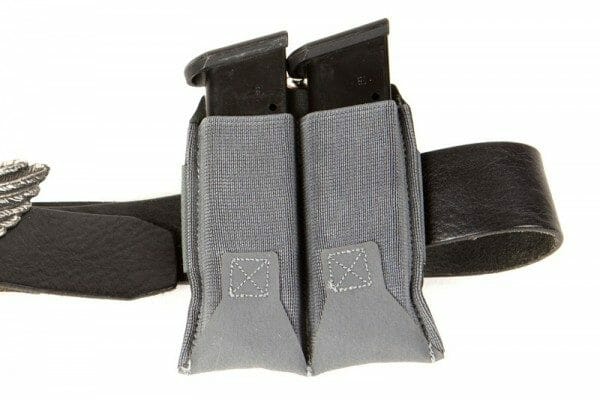 The industrial elastic pouches are one size fits any.

The pouches define “zero bulk” as the front and back surfaces add mere millimeters (if that) to the thickness of your magazines. The back is a cloth laminate called ULTRAcomp that’s flexible but super tough. The front is made from military-grade elastic. That means that the pouches stretch to accommodate magazines of any size: single, stack, double-stack, and caliber of your choice. This elastic does spring back to original size so you can stick fat double-stack magazines in one day and singles the next. The belt loops are constructed from hook and loop material. That’s tacti-speak for Velco. You can size the dual belt loops to any belt width up to two inches.

The versatility is great, but one reason these make the favorite five list because they’re soft and flexible – great for concealed carry. Also, there’s nothing that says you have to carry two magazines. If you like, you can carry one and some other piece of gear. I often stick a multi-tool or flashlight in the second pouch. 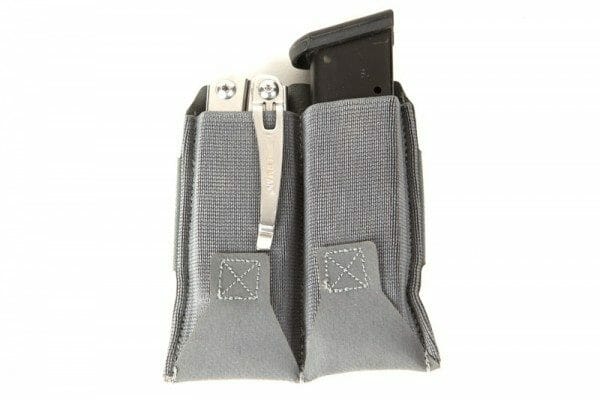 Nothing says you have to use both pouches for magazines. I often carry a multi-tool, knife, or flashlight in the second pouch.

I live in Sub Sauna Carolina. It’s hot for at least 592 days per year. It’s not only hot but steamy humid. So, all the great advancements in low-cost electronic hearing muffs still end up as a sweaty mess on my head. Those also tend to press safety glasses frames into your temples, making a permanent moat between your eyes and ears. Sure, you can use foam ear plugs, and they work great provided you don’t want to hear anything at all. Or, you can drop a couple of grand on custom-molded in-ear electronic plugs. Or…

You can invest about $300 in a set of Etymotic GunSport Pro electronic plugs. That’s not pocket change, and if you are a once-per-year shooter, they’re probably not for you. However, if you frequent the range or compete, they pay for themselves really quickly in comfort and convenience. The kit includes six different sets of ear tips so you can achieve a perfect fit that won’t give you an earache. When I go to events and training classes, I’ll just leave them in all day long – they’re that comfortable. 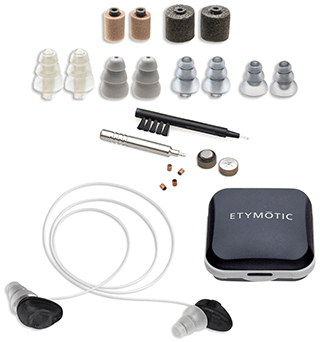 They dampen gunshot noise to hearing-safe levels. An alternate setting magnifies nearby sounds by 5x while still providing protection again dangerous noise levels. That’s handy for hunting or hearing range commands clearly. I’ve tried lots of others, and these take the cake for their excellent and very natural sound quality. That combined with all-day comfort lets you forget you’re wearing them. One more thing. Unlike large over-the-ear muffs, these don’t get in the way when shooting rifles and shotguns.

I don’t know about you, but I thoroughly clean my guns immediately after range outings – at least as often as every 10 or 57 times I go shooting. I used to be a shoot once, clean once kind of guy, but I figured out, concurrent with the onset of male pattern laziness, that modern guns work pretty darn well and don’t really need to be cleaned every couple of dozen shots. Not to mention all that taking apart and cleaning multiplies the odds that you won’t put something back in place just right. Unless you clean your guns at the range after your done shooting and can fire a couple of test shots, you don’t really know for double-secret-sure that your gun is in proper functioning order. 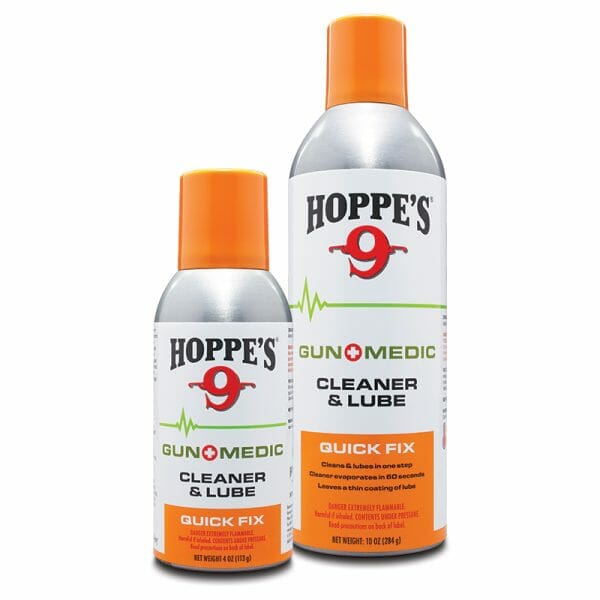 My less than rigorous training routine is one of the reasons I always carry a bottle of gun Hoppe’s Gun Medic Cleaner and Lube Quick Fix in my shooting bag. The combo cleaner and lube comes in an aerosol can. The cleaner blasts the nasty stuff away and then evaporates, leaving a thin layer of lube behind. To be clear, this combo packaging is for exactly what the name says – a quick fix. The idea is to get your gun working when it’s sluggish from filth without having to field strip and start cleaning. Just spray in the action or through the ejection port. It works like a champ on semi-automatic pistols and AR-type rifles. If you like the lube, you can buy the cleaner and lube separately for proper apres-range cleaning.

So, my favorite five? Yes, if I weigh the choices based on what I’ve actually ended up using consistently over the long haul.