About the same size as a laser, the MantisX Training System mounts to the front rail.

Can we all agree that dry fire practice is the best way to rapidly improve one’s shooting skills? Can we also agree that most of us do it about as often as Colin Kaepernick earns doctoral degrees in political science? I think most of us take the attitude that whatever we lack in training and skills we can make up for in sheer desperation.

Structured dry fire practice is arguably the best way to improve your shooting skills rapidly. Without all that explosion stuff going on in front of your face, you can focus on developing a perfect trigger press. More importantly, you can easily see if your gun moves and your sights some off target as you press the trigger. When shooting real ammo, you can certainly see the results of your shot on target, but with all the commotion, you have no way to know exactly what went wrong and when – until now. Hold that thought for a second.

Over the past year, I’ve been experimenting with some different ways to improve my handgun skills safely from the comfort of my home. One such solution has been the LaserLyte Quick Tyme target set and LaserLyte Trainer Cartridges. The cartridges fit in your regular handgun and fire a laser beam at the reactive Quick Tyme targets every time you press the trigger. It’s a neat system that gives you instant feedback on hits and misses. It’s also fun, so you tend to practice more frequently. It’s a great system that tells you the absolute basic results – hits and misses.

Technology marches on, however, and this year at the annual Shooting, Hunting, and Outdoor Trade (SHOT) Show I stumbled across a new, and very promising, training tool – the MantisX Training System. It goes far beyond hit and miss tracking. Let’s take a look. 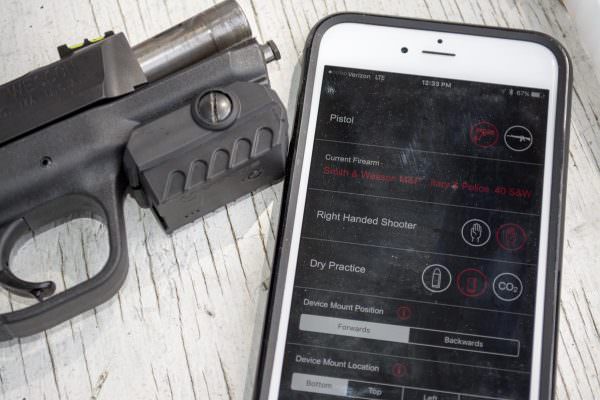 The MantisX unit syncs with iPhones and Androids via Bluetooth.

The MantisX Firearms Training System takes a radically different skills improvement approach to the simple measurement of hits and misses. Instead, it’s designed to analyze your (for lack of a better word) micro-movements just before, during, and just after you press the trigger. The system will tell you how much you moved, and in what directions, with precision far beyond what the human eye of even a seasoned coach can see. The idea is to monitor a series of shots and give you instant feedback on all those details.

Here’s how it works. The MantisX Training System is a high-tech electronic coach. It’s a small and lightweight device that mounts on the front rail of most any pistol or rifle. Inside are some fancy sensors and electronics that detect the movement of your gun milliseconds before, during, and right after your trigger press. These movements are recorded and beamed to your tablet or smartphone via Bluetooth. Fancy software analyses that data and shows you different graphical post-mortems of your shot, in excruciating detail. You’ll clearly see exactly what you did for each shot in a string and the aggregate “quality” of all your shots. 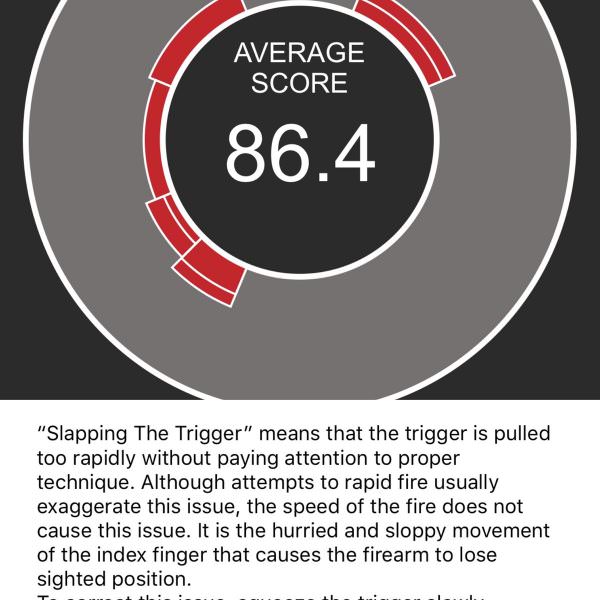 The primary score view shows your tendencies on a target representation and offers advice based on what the system sees.

The best way to explain how this works is to walk through the process. It’s rechargeable using the included USB cable. When you turn it on, it’ll want to connect with the smartphone app that you download for free. Once the connection is established in a second or so, you can configure settings in the app to tell the system what kind of gun you have, whether you shoot right or left-handed, whether the unit is mounted on a bottom, side, or top rail. Yes, that means you can stick it on a rifle too.

There’s one setting that warrants extra special attention. You can tell the MantisX unit whether you’re dry firing, live firing, or using a CO2 pistol. Yes, you got that right. This system is not just a dry fire tool; you can use it at the range to help fine tune your actual shooting performance. The CO2 option is pretty nifty too as you can use an air pistol charged with gas (and pellets or no pellets) to practice at home with a bit of recoil sensation. 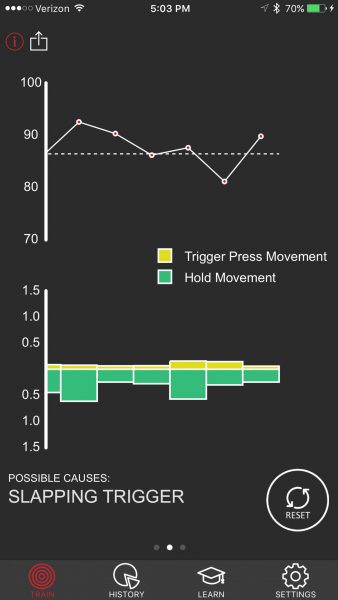 The second view screen shows the score of each shot (top) and the relative movement of the gun before and during trigger press (bottom).

I’ve been using this system in all three modes. It works. It’s addictive. It appeals to your inner competitive nature. When this thing scores you, your first natural reaction is denial, but that’s quickly followed by a desire to do it again and improve.

When you begin a firing session, MantisX will record the movement of your gun off target and assign numerical scores based on how far off you drifted before, during, and after your shot. This data is represented several different ways in the app. You’ll get a raw numerical score, which is the quick and dirty indicator. You’ll also see charts that show you direction and frequency of movement relative to the bullseye. You’ll also see a different representation of hold movement versus trigger press movement. That helps you identify and fix shot anticipation issues. Last, there’s a view that shows a graphical track of muzzle movement before, during, and after the shot. All of this info is captured and stored so you can monitor performance over time to see how you’re improving and identify chronic problem areas. The app even offers advice and suggestion based on the analyzed results. 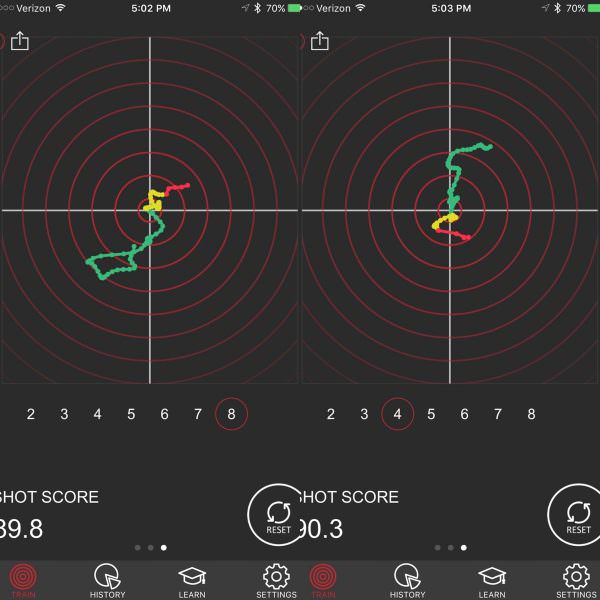 The trace view shows the movement before trigger press (green), during trigger press (yellow) and after the shot (red). Here are two different shots down side by side. You can see how I pulled ever so slightly on the right hand chart.

The dry fire function worked really well. The device had no trouble detecting trigger press and capturing data on every shot. Sure, when I practice dry fire, I can easily game the system, so to speak, and execute a pretty good trigger press with minimal gun movement. Those charts in the MantisX app look (relatively) flat and scores are high. However, the real value in this system was in seeing what I really do when I’m not thinking about it. Having the MantisX system track me while drawing and firing, executing multiple double-action shots, and other dry fire drills was an enlightening and somewhat humbling experience.

Where the MantisX really shines is at the range. With all the speed and commotion of live fire, it’s very difficult for the shooter or observer to identify minor mistakes. No worries, the MantisX unit measures and records everything you do, no matter how fast and furious your shooting routine. For example, if you’re trying to clear a steel plate rack in record time, you’ll get a detailed analysis of what you did right and wrong after you’re done. While you may still hit the target, if your technique is off, you’re going to miss that one periodically. The system will help you spot those technique issues that result in “just barely” hits.

The system comes packaged in a nifty little Pelican 1010 Micro Case so you can toss the whole thing in your range bag and not worry about knocks and bumps or gun oil leaks. Assuming you’re serious about skills improvement, it’s also affordable with an MSRP of $149.99. That’s not many boxes of ammo when you think about the upside of years of “free” skills improvement. This sensible use of technology is one of the most useful training tools I’ve seen in a very long time. It’s like having your own professional coach, even when you’re shooting alone.