The Burris Veracity Scope on this Masterpiece Arms rifle uses minute of angle turrets marks. How does that help simplify accounting for bullet drop?

In part one of the Long Range Shooting Guide, we made the astounding observation that gravity happens. The very picosecond that a bullet leaves the muzzle, it begins it’s slow and inevitable downward death spiral, ultimately ending in a collision with the ground – unless it hits something else first.

Because of gravity, shooters need to account for bullet drop by “aiming up.” How much “up” depends on many things, but mainly the distance to the target. The farther away the target is, the more time elapses while the bullet is in flight, and the more time gravity has to push it towards the dirt.

Let’s consider a real example. I’ve been testing a Masterpiece Arms BA Lite 6.5mm Creedmoor rifle. When it’s zeroed at 100 yards shooting some nifty hand loads with Hornady’s 140-grain ELD Match bullets, I can calculate the exact amount of bullet drop (or how much I have to aim “up”) for any given distance. At 800 yards, that bullet will drop 163.53 inches. That’s no big deal, right? All I have to do to hit the target is adjust my scope to the “163.53 inches for 800 yards” setting. Obviously, there is no such mark on the scope dial, so that’s where the concepts of minutes off angle and milliradians come into play. That are just standardized ways of accounting for bullet drop over any distance.

We’re going to dive into the basic math for just a hot second. To understand the concepts of MOA and mils, it’s important to know the land from which they hail.

A radian is a unit of distance around the perimeter of a circle. If you start nibbling your way around the very edge of a Reese’s Peanut Butter Cup, and you make it all the way around, you’ll have nibbled 6.28 radians of yummy goodness. If you take just one small bite from the edge, say about one-sixth, you’d have eaten about one radian of the edge. Now, imagine drawing a line from the center of your Reese’s to the start of the bite mark and another from the center to the end of the bite mark. Those two lines form an angle that forms one radian.

A minute of angle is an angular measurement. It just represents a different amount. A circle has 360 degrees, right? Well, a “minute” is 1/60th of a degree, so there are 21,600 (60 * 360) “minutes” in a full circle. A minute of angle (MOA) is also a really narrow angle, even smaller than the one represented by a milliradian. If you drew two 1,000 yard-long lines separated by a single minute of angle, they would diverge to just 10.4 inches apart at the very end.

Whether we’re talking about minutes or mils, both are proportional measurements, so the number they represent changes in a constant fashion as distance increases. Just like going 100 miles per hour in your Bugatti Veyron gets you to Dunkin Donuts twice as fast as traveling 50 miles per hour, the distance represented by a minute or mil is double at 200 yards from what it was at 100. 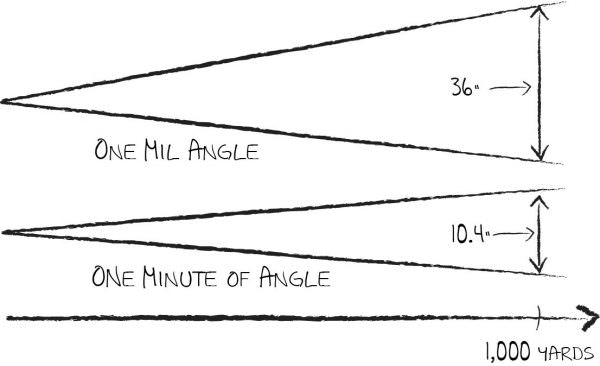 Both mils and MOA are “angular” measurements so they represent proportional distance relationships.

Now we have a way to standardize scope adjustments for distance. Since it’s impractical for scope makers to put marks like “163.53 inches for 800 yards” on the turrets, they instead put markings measured in either minutes of angle or milliradians. With some simple math, we can figure out exactly how many MOA or mils will translate to that 163.53 inches and adjust a scope accordingly.

Sticking with our example of wanting to hit that 800-yard target and accounting for 163.53 inches of bullet drop, let’s do the long walk through the math to calculate how many MOA that is. To keep things simple, we’ll round a bit, and assume that one minute of angle is 10 inches at 1,000 yards instead of 10.4 inches. Since all of this is proportional, then one MOA is 8 inches at 800 yards because every 100 yards is one MOA. We need to adjust for 163.53 inches of drop, so that would be 20.44 sets of eight-inch increments (163.53 / 8) or 20.44 minutes of angle. Since most scopes have turrets that with minute of angle marks, we should be able to dial right up to 20.5 and hit the target.

For minutes of angle you can use this direct formula:

In our example, the calculation would be this:

If we want to be extra precise, we can skip the rounding and use the exact minute of angle measurement into the math and use this:

Minutes of Angle = (Correction in inches * .96) / Range to target in hundreds of yards.

The .96 factor accounts for the fact that a MOA is 1.04 inches instead of an even one inch.

If we want to use milliradians instead of minutes of angle, the logic is exactly the same although the units are different.

If our scope uses milliradian units on the dial, we’d spin to the closest setting to 5.675.

Based on some completely unscientific research on the universe of scopes, it seems that the vast majority use turrets with 1/4 MOA markings. Simply put, that means that each click of a dial makes a 1/4 minute of angle adjustment in where the bullet hits. Even more simply put, since four clicks would be one MOA, then four clicks would make a one-inch adjustment at 100 yards. Stated differently, every click moves the impact point 1/4 of an inch when shooting at 100 yards. If you are 3/4 of an inch off bullseye, then adjust three clicks. If you’re two inches away, adjust eight clicks (two inches / 1/4 inch per click).

We’ve been talking about spinning the turrets, but all of this works exactly the same if you choose to hold over using the markings in your scope reticle. While there are 22 billion scope reticle designs, the one thing they all have in common is that the manufacturer documents somewhere the distance between the various markings on the scope. If your scope has hash marks on the vertical reticle line that are one MOA apart, you can just hold over by the required number of MOA for your shot rather than going to the trouble of moving turrets. For this reason, it really pays to know the reticle marks in your scope. This ability to hold over with precision is why mil-dot reticles are so popular. When the marks in your view are one mil apart, you can very quickly adjust for a shot at any distance once you determine how many mils of adjustment you need to make.

Here we’ve been focusing mainly on bullet drop to describe the whole concept of minutes and mils, but the exact same concepts apply to sideways movement too. Whether your target is moving or the wind is blowing you need to account for sideways movement at any given range.

If you want to save lots of time and ammo zeroing a rifle or increasing your odds of hitting a distant target, invest a little time to understand the concepts of MOA and mils. Just knowing the 100-yard numbers of 1.04 inches per MOA and 3.6 inches per mil will take you a long way if you can do some quick math in the field. Better yet, memorize your reticle patterns and markings, so you know exactly what all the hash marks indicate. Next time, we’ll get into more discussion on reticles and tools you can use to estimate range and bullet drop adjustment.