There’s a reason there are so few 300 Blackout optics on the market. It’s kinda hard to design a single reticle to handle the exceptionally broad range of ballistic performance of that cartridge while keeping the reticle clean and simple. The turrets are calibrated for 1/2 minute of angle adjustment per click.

Let’s take a look at exactly what I mean by “broad range of ballistic performance.” For purposes of the trajectories shown in the table below, let’s assume a zero yard zero, and we’ll use two common and “representative” projectiles and “standard” velocities. For the supersonic load, we’ll show the flight path of a Barnes TAC-TX 110 grain bullet. I’ll assume a velocity of 2,500 feet per second. For the subsonic load, we’ll use the classic 220 grain Sierra Matchking and assume a traveling speed of 1,050 feet per second. 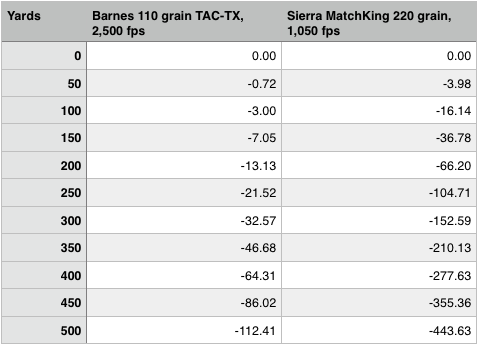 As you can see, the brick, I mean subsonic round, falls at about four times the rate of the supersonic. That’s a lot to account for. From an optics perspective, the most feasible plan is to design a reticle for the supersonic round and figure out a couple of realistic hold points for a short range trajectories of the subsonic round.

The Leupold Mark 4 is a variable scope with the 300 AAC Blackout specific reticle in the first focal plane. This means that the reticle will grow and shrink as you adjust magnification. At low magnification levels, the inverted horseshoe acts like a red dot, especially with illumination on a high level. At higher magnification levels, you have a finely granulated reticle that provides moving target lead information, range estimation tools and holdover points for supersonic and subsonic loads.

The optic itself is all Leupold. It’s solid and all movements operate like clockwork. Flip up scope caps are provided that mount with rubber friction cups. Unlike others on the market, these stay in place until you want to take them off. The magnification dial is stays in place but is easy to rotate with one hand while keeping a firing grip on the rifle. The windage and elevation dials offer quiet, smooth and positive click adjustments, with each click representing ½ Minute of Angle (MOA) or ½ inch at 100 yards. One nice touch for windage and elevation adjustments is an engraved directional indicator that is visible from the back, telling you which way to twist to the dials to move point of impact up, down, left or right. Let’s talk about the reticle for a minute. It’s engineered to show hold points for both supersonic and subsonic 300 AAC Blackout loads. Leupold’s approach is to split the reticle horizontally – the right side of center shows supersonic information while the left indicates subsonic. Just in case you forget, there is small and subtle hare engraved in the lower right and a tortoise on the lower left.

The supersonic (right side) markings indicate hold points from 100 to 900 yards with marks at each 100 yard increment. Each horizontal indicator bar is sized to represent an 18 inch wide target at the respective yardage length. For example, if the 400 yard hash mark appears to be the same width as an object you know to be about 18 inches wide, then that object is 400 yards down range. It’s a quick and easy ranging system.

On the subsonic (left) side, there are hash marks from 100 to 400 yards with a line at each 100 yard increment in that range. There is not a 50 yard indicator per se, but between the center dot and bottom of the inverted horseshoe, you can do a quick test to find short range impact points for your chosen subsonic load.

One other reticle feature to note. On either side of the center dot are horizontal lines with hash mark indicators that correspond to hold points to lead targets moving at 5, 10 and 15 miles per hour respectively.

To make the distance hold points work for supersonic and subsonic loads, just zero the optic using supersonic (110 or 125 grain) projectile at 100 yards.

The reticle is illuminated with the inverted horseshoe and center dot lighting up in red. A left side knob offers seven different light levels for low light or daylight conditions. One handy feature is that between each intensity setting on the dial is an “off” position. You don’t have to spin the dial all the way back to zero each time you turn illumination on or off. Just keep is one click from your most commonly used setting, give it a click in either direction and you’re good to go. The Leupold optic offers precision at longer range. While the markings are a bit optimistic (400 yards for a subsonic 300 Blackout is quite a lob), I guess that’s no different than the speedometer on your Caddy going up to 160 miles per hour. You can lower magnification and turn on the illumination for quick close range performance, but I think this optic really shines when you are engaging targets out past 100 yards. The glass is crystal clear as you would expect from Leupold, and with the finely graduated reticle you’ll be able to account for distance very precisely.

You can find it at Optics Planet.