My Glock 31 Gen 4 with Crimson Trace LG-850 Lasergrips is now green with envy. Because of my Glock 17 Gen 4 that is now sporting the hot off the line Crimson Trace Green Laserguard LG-452.

Following up on the sneak previews at this years NRA Annual Meeting, Crimson Trace is just about to release a whole slew of green laser models. In September, we’ll see Laserguard models for Kimber and Smith & Wesson 1911’s, GLOCK Full-Size & Compact, and Springfield XD & XD(M) pistols. Based on our earlier experience with the Lightguard for 1911’s, we’ll bet it will fit the Springfield 1911 models as well. Also on the soon to hit the shelves list is the Rail Master unit with a green laser. We just finished reviewing a Rail Master with a light and found it to be versatile enough to fit every gun in our safe that is equipped with a rail. AR rifles included.

As stated, the Crimson Trace Green Laserguard will run for about 2 hours of continuous use. Considering that the unit is equipped with a positive on/off switch that disables the instinctive activation button, this is plenty. Going to an outdoor range to plink or practice? No problem, you decide if you want to chase the dot. If you would rather work with iron sights and save your battery, just flip the switch off and shoot normally. The Laserguard also features windage and elevation adjustments so you can set your laser zero to preference. When I mounted it on the Glock 17 Gen 4, the green dot was just above the front sight, so it had a usable zero right out of the box. The included tool is dual purpose. It fits the mounting screws that fasten the two halves of the Laserguard together and is used for windage and elevation adjustments.

The Crimson Trace Green Laserguard LG-452 uses a single CR2 Lithium battery. The first one is included with the unit. For future replacements, CR2 batteries are available at most any grocery or drug store,

The whole point of green lasers is visibility. The human eye picks up green easily – more so than other colors. In the same manner that human eyes are immediately drawn to members of the opposite sex, so it is with green lasers. It’s simple biology. 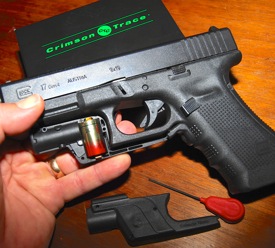 Installation of the Crimson Trace Green Laserguard is easy

The big benefit to the Crimson Trace Green Laserguard is high visibility – in all conditions. While operating indoors, the green laser really shines – noticeably more than a traditional red laser.

The biggest difference, however, is visibility in daylight conditions. I generally don’t bother trying to practice with a red laser at outdoor ranges unless it’s getting to be end of day and the light is fading significantly. You just can’t see that red laser dot more than a few feet away in direct sunlight. The green laser is an entirely different story. I had no problem clearly seeing the green dot, in broad daylight, on targets 100 feet or more away. It’s an amazing difference that you have to see to believe.