When I got into this whole shooting thing, I frequently read mentions of things called “kit guns” in the established gun magazines. Usually in articles written by guys older than me (and that’s saying something) the term “kit gun” referred to a small, portable, light revolver that was suitable for tucking into a backpack or fishing tackle box. You know, something to have on hand for… whatever.

The sage of the internet, Wikipedia, describes a kit gun this way:

“A kit gun is a small, lightweight handgun, usually but not always .22LR caliber, and generally but not necessarily a revolver, which is intended to be carried in a kit bag by campers, hunters, trappers, and fishermen.”

While walking my dogs, I got to thinking about what a kit gun is nowadays. Everything else has gone to updated versions like Web 2.0 and Gun Culture 2.0, so why not Kit Gun 2.0? When I thought about it this way, my ideal kit gun selection was easy. In fact, I didn’t even have to think about it because I’ve been using one exactly that way for the past couple of years. What is it?

Since we’re now in the 2.0 world, some things are different than the kit guns of Gun Culture B.C. First, while it’s perfectly suitable for tossing in a pack or tackle box, it’s certainly not limited to only those handy but rustic camping and Grizzly Adams applications. Second, it’s a bit decked out with some 2.0 modern technology. Third, while never a hard and fast rule for kit guns, this one isn’t a revolver — it’s a semi-automatic.

If you’re not familiar with the gun, it’s a scaled down .22LR pistol about the size of a Smith & Wesson M&P Shield. The M&P 22 Compact is 6.7 inches long compared to 6.1 for the Shield, but that’s because it’s got a longer 3.5-inch barrel. It’s lighter at 15.3 ounces compared to the 18.3-ounce Shield. This little single-action has an ambidextrous safety that’s positive — you can feel and hear the lock and unlock positions unambiguously. The magazine release is reversible so if you’re a lefty just flip it to the other side and you’re good to go. The M&P 22 Compact comes with two 10-round magazines, and you can carry one in the chamber for a total of eleven. The sights are standard white dot – three of them. The rear is adjustable for windage and elevation. That’s handy not only to account for the wide variety of rimfire ammo out there but to deal with the point of impact shift if you add a suppressor. Did I mention that the M&P 22 Compact comes with a threaded barrel? The threading is internal to the side so if you order the standard model you need to acquire a 3/8”x24 to 1/2”x28 adapter. You can also order another variant direct that includes the adapter. I kind of like the approach. If you’re not using a silencer, then there’s nothing sticking out the end of the slide to get caught on stuff in your kit.

The real joy of the M&P 22 Compact comes from all the things you can do with it. That’s what makes it a Kit Gun 2.0 in my book.

I keep this one geared up with a SilencerCo Sparrow suppressor. At just five inches long and small enough not to obscure the sights, it makes a perfect “First Shots” gun. Even the most timid and fearful first-time shooter friends are guaranteed a smile and great experience. The pistol has a small enough grip to fit any hand, but it’s not so thin that we big-mitted folks have to do any finger gymnastics to work the trigger comfortably.

The best part of this for new shooter introduction is that the configuration allows them to focus entirely on technique and the satisfaction of making hits. With no recoil and no noise, it’s pure non-intimidating fun.

While I live in suburbia, we’re next to what savvy real-estate marketing people call “wetlands.” We call it a swamp. Whatever the proper description, that means we get random critters trying to cross our border into places like the partially-exposed garage downstairs.

The solution is simple math.

In case you’re not familiar, the Aguila Super Colibri cartridges are .22 cases with primer only topped by a 20-grain lead bullet. With no powder charge, the primer bang drives that underweight projectile at 350 to 550 feet per second depending on which gun you use. It’s great for pistols because the short barrels won’t trap the bullet before it exits but be careful using it in rifles. There’s probably not enough juice to make the bullet come out of the fiery end. In this case, the combination of powder-less ammo and a silencer means that the resulting shot is so quiet that it actually removes ambient noise from the area. I think it’s like some kind of ammo anti-matter, but we’ll avoid the quantum physics discussion for now. 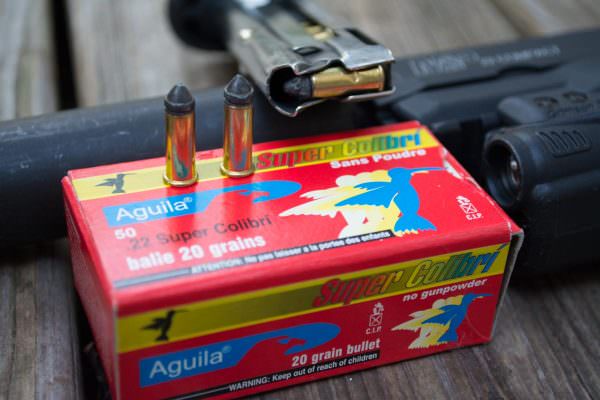 For this Kit Gun 2.0, Aguila Colibri ammo is the bomb.

Oh, one more detail. Since the Colibris are so low-powered by design, you’ll need to rack the slide for each shot. Think of it as built-in malfunction drills.

Suppressed or not, this gun is a hoot. Whatever the configuration we’re talking about virtually non-existent recoil and low-noise. Add (relatively) cheap ammo, and we’re talking about a pistol you can use for practice and technique development to your heart’s content without breaking the bank. If you have kids, then you know how much a range visit can devour your wallet. “Dad, can I shoot 17 more magazines from the 45 before we leave?”

Whatever your “real” gun is, you can get valuable practice time with this one. After all, sight picture, target acquisition, transitions, and trigger technique are universal skills that easily translate to any other handgun.

It’s the age of crayon therapy, fairness at all costs, and social justice warriors, I figure I’m entitled to a new generation of kit gun. As long as you agree with me, then you’re entitled too. Let’s meet soon so we can plan our strategy to get M&P 22 Compact reimbursement credits written into the next health care bill. If you don’t agree, then you’re obviously some type of kit gun-ogynist fascist pig, and you can bet I’ll be protesting your sorry butt as soon as I can find someone to pay me to do so.
About