Today we’re going to do complicated math. We’ll be talking about zeros, trajectories, and gravity. Fortunately we will not be talking about shooting in zero gravity as bullets would fly forever, or at least until they crash into the drifting hulk of the Discovery One.

Fortunately, it’s not as complicated as deciphering the true meaning of White House press briefings, as long as you understand how bullets fly. Bullet trajectory is almost as simple as dropping a brick, except the bullet flies forward as it drops towards the ground. When you fire a bullet, there is no magical force that helps it defeat gravity. In fact, if you fire a bullet from your AR type rifle, perfectly parallel to the ground, the bullet you fire will end up hitting the ground at just about the same time as a bullet you let fall from your hand straight down. I say, “just about” only because the earth curves a bit, and the fired bullet will have a smidge farther to fall than the dropped one. It’s that gravity thing we just can’t defeat, no matter what.

No matter how fast a bullet is flying, it’s constantly falling towards the ground. Even bullets from those so-called “High-Powered Assault Weapons.” If you look at the path of a bullet, it will always be a downward sloping curve, kind of like congressional approval ratings.

But wait, you say, when I aim right at a target 100 yards away, the bullet hits it! That’s correct, but only because the barrel is actually pointed a little bit upwards relative to the ground. Shooting a bullet is a just like throwing a football except you don’t get 12 million a year plus a signing bonus. You need to aim it up a little bit so it arcs back down to intersect at your desired impact point. 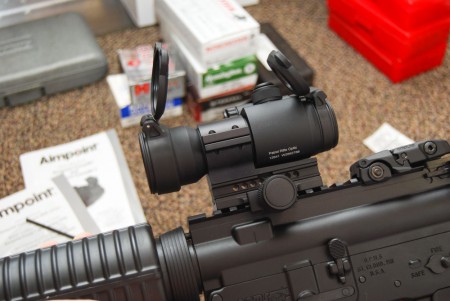 Most AR optics are about 2 1/2 inches above the bore line.

Whether you use iron sights or a fancy optic on your AR rifle, you will always need to plan for the intersection of the straight line designated by your line of sight and the arc of the bullet. Your line of sight is not subject to the laws of gravity, so you see in a perfectly straight path unless you stayed out too late last night. Since your bullet leaves the barrel in an arc pattern, it may actually intersect your line of sight twice – once on the way up, and again on the way down. But that depends on your zero distance.

Read the rest at AmmoLand.com!