Holsters I Really Use, Day In and Day Out does a great job of keeping a large gun in close.

USA –-(Ammoland.com)- As part of my job, I’m constantly checking out new holsters. Dozens of them are in the holster rotation at any given time – literally. After accumulating a couple of hundred holsters in the unused holster box, which has grown to several boxes, I thought it would be interesting to step back and examine what holsters I’m using over the long haul. Not which ones I should be using, or which ones the internet says I should be using, but what gets strapped on voluntarily on a regular basis.

I figured I would do this somewhat objectively as there might be some surprises when I was honest with myself about which ones got the nod more days than not. The super scientific plan was to look at the ones that had migrated to the top of my most commonly used holster drawer in my desk. I figured those were the ones really getting the most frequent use.

Without further ado, here’s what I found.

This model has longevity in my rotation and has been a frequently used and abused model for a couple of years now. Two of them turned up when I tilled the top layer of the holster pile, one model each for a Sig Sauer P229

and the other for a 1911 Government Model

The holster itself has a hybrid design with a large leather back panel and two metal belt mounting clips. The gun pocket is made of Kydex and perfectly fitted to the gun model in question. 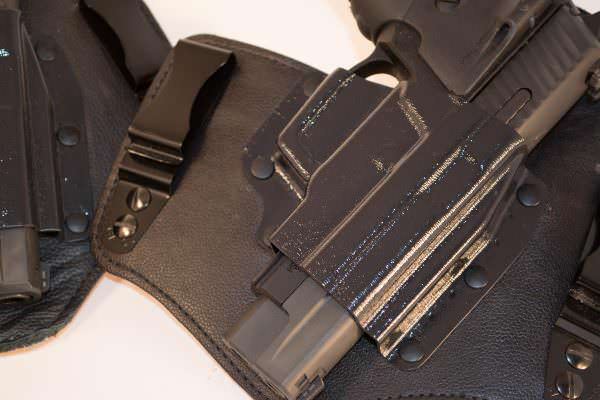 The Galco King Tuk shows attention to detail in all the right places.

There are many hybrid models on the market, and I’ve tried numerous brands. I keep pulling this one out of the drawer for two reasons. First, it’s exceptionally well made. All the corners of things are smoothed and rounded, so it doesn’t dig, aggravate, or snag. Second, the leather has held up to a lot of South Carolina hot and humid sauna weather for years. Other hybrid brands have gotten all limp and wilty.

I was snobby to the poor folks at N82 Tactical at the first couple of times I saw them at trade shows. Walking by a booth, I saw a holster with a flat panel, a band of elastic, and single metal clip. Ho hum – seen plenty of those, right? Then, one time I finally stopped to talked to one of the “Nate’s” about what makes their holster so great. As a side note, that’s where the N82 name comes from – it’s pronounced Nate Squared. Get it? Nate 1 patiently explained that, like me, they had never found an effective and durable holster that was comfortable and would hold up for the long haul, so they designed their own. That’s the American way, right?

They make their back panel out of three layers: suede on the body side to distribute weight via friction and provide comfort against sensitive skin parts, neoprene in the middle to serve as a moisture barrier (both ways), and smooth leather on the gun side to make for a slick draw that wouldn’t tear up your gun’s finish. On the original model, the gun was held in place by a wide elastic band. Later models used polycarbonate shells that added nifty “latchless” retention capability. You draw with a twisting motion to detach the gun from the holster shell. 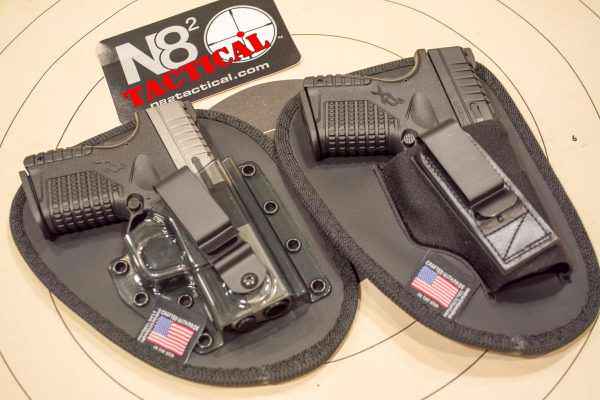 A pair of N82 Tactical Holsters. On the left is the retention model with polycarbonate shell. On the right is a tuckable Original model.

If I had taken the trouble to count uses over the past several months, this one probably would have won the frequency award. I regularly use two, a smaller model with a Springfield Armory XD-S 9mm and a larger one with a Sig Sauer P229 Legion 9mm. Both are the most comfortable holsters I’ve ever tried. The neat thing is that the back panel is large enough to cover the gun grip too. This has two ramifications. First, in hot climates, that’s handy because it keeps rough grips away from bare skin and sweat off of the gun. Second, you’ll want to practice your draw with this holster as you need to jam your thumb between the holster back and gun grip. No biggie there, just be aware it’s a little different.

One more comment on these models – the friction benefit of the suede backing is incredible, which is probably why the single mounting clip works fine. Even when carrying the relatively heavy Sig P229, it just doesn’t move. It’s not one of those holsters that you have to move and fidget with throughout the day.

I have nothing against Kydex, but I seem to keep picking leather outside the waistband holsters. To me, it’s just more comfortable and I like the feel. 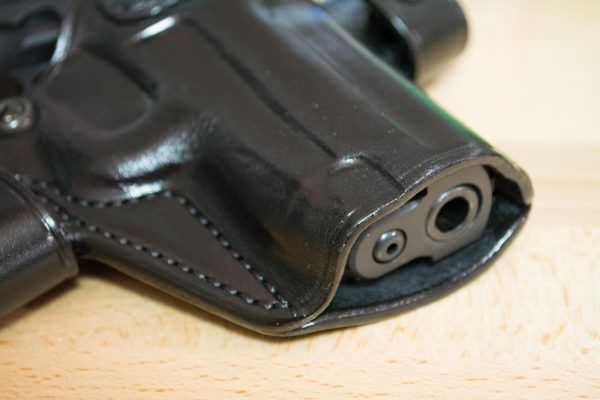 Note how the outer leather panel is molded all the way around the front of the gun, rather than half with front leather and half with the rear. This helps tuck the gun in tight.

I like the Galco Side Snap Scabbard because like most Galco holsters, it’s exceptionally well made. It fits my Sig Sauer P229 legion perfectly, so friction-only retention is excellent. I choose it frequently because of the snap mount system. If I’m headed to the range and want to wear an OWB rig, I don’t have to unthread my belt to mount it. It’s also easy to place exactly where I want it. Unlike other snap mounted holsters and magazine carriers I’ve tried, this one has never come unsnapped during reasonably vigorous activity – ever.

When I want to go outside the waistband all day, I generally choose the Galco Concealable Belt Holster

for the Smith & Wesson SW1911. Here’s why. It’s tough, made from steer hide and double and triple stitched all over. The sewn-in belt loop holes are for 1 ½-inch gun belts, which is what I generally use. Most importantly, it’s molded in such as way as to draw a full-size 1911 in close – grip included. The hand-molding around the gun is all done with the exterior piece of leather, so the inside of the holster goes right against your body with no gun bulge pressing inwards. This helps make it the outside the waistband holster that conceals best among the ones I’ve tried.

I took a look at the next layer down to see what popped up. Two, in particular, get greater than average use.

First, when carrying a colossal gun, in this case, the FN FNX 45 Tactical with a Trijicon RMR sight, I use the Alien Gear Cloak Tuck

3.0. It’s another hybrid design that’s highly configurable. It’s made well, does a great job of keeping moisture from moving in either direction and most importantly, does a fantastic job of supporting and stabilizing a HUGE handgun. Why do I carry an FNX 45 Tactical? Got me, I just like it. Don’t judge, OK? It’s not a daily thing, but once in a while you just have to go big or go home. 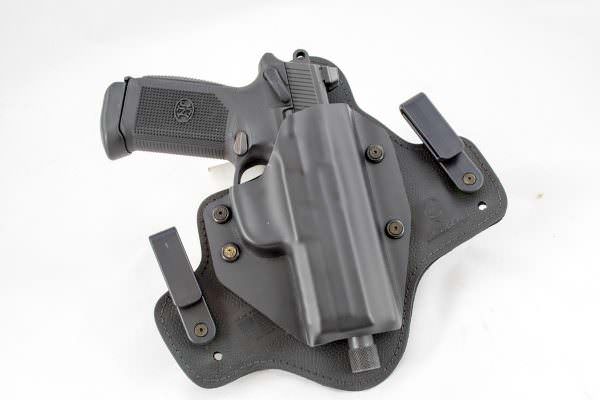 This Alien Gear Cloak Tuck does a nice job of supporting a large gun like this FN FNX 45 tactical.

. This one is simple but effective. Made of steer hide with rough side out construction, I carry a Springfield Armory XD-S with it. It’s got a smooth draw and steel reinforced mouth for easy gun insertion. A hook and flat based shaped into the leather keep the gun upright and the holster in your pocket when you draw. It’s simple, but just works. I’ve been using this one forever. 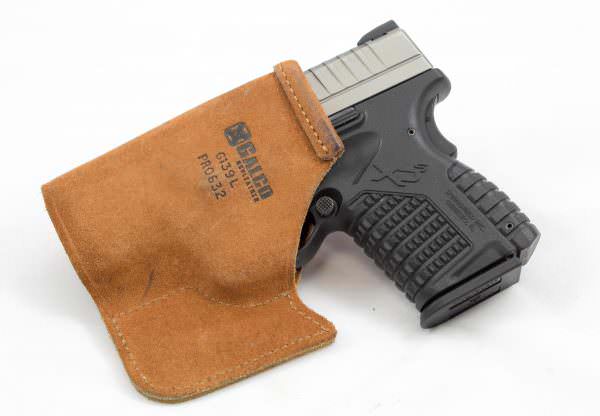 When carrying a Springfield Armory XD-S in the pocket, I almost always use a Galco Pocket Protector holster.

Going through this process was kind of enlightening. While the holsters that popped up on this list are all high quality, it was interesting to create a “top” list based on what I actually used most frequently as opposed to what is supposedly “the best.” You can develop all sorts of criteria as to what is “best” based on retention features, gun fit, materials, clips, torture tests, or whatever else we can dream up. I guess what really matters is what you use, provided it’s good enough to get the job done.