Handgun Ammo You Can Bet Your Life On Will your self-defense ammo do what it’s supposed to like this Sig Sauer V-Crown .45 ACP?

While no one I know wants to be shot with one, handguns aren’t exactly pocket howitzers. They make holes. Yes, messy ones, but holes nonetheless. A shot from a handgun might stop a determined attacker, but likely won’t. Just ask Sergeant Timothy Gramins of the Skokie Police Department. His attacker soaked up 14 rounds of .45 ACP before he quit fighting back.

However, a handgun is much easier to conceal than a Barrett M82

, so it’s likely going to be what you have at your disposal in the event of an emergency. If that’s what you’ve got, and it’s less than ideal to start with, then every possible advantage in the ammo department helps, right?

The thing is, you can’t just pick quality self-defense ammo based on the brand name in the box. Sure, everything reputable will work to some degree and offer reliability, but you may not be able to count on it doing all the things it’s supposed to like penetrating to the right depth and offering proper expansion after passing through tough clothing barriers. Every caliber offering from under the same label performs differently, and every ammo variety won’t perform the same in all guns. For example, the Flaming Mushroom Razor Nuke 9mm load may perform like a champ, while the .45 ACP variant of the same ammo doesn’t quite do what you would expect. I’ve seen that a lot with some of the most popular self-defense loads out there.

After testing hundreds of loads in a variety of calibers over the years, here are some that stand out. I’ll group them together by the label, then call out the specific caliber offerings that have performed well. Oh, and just because your pet ammo isn’t listed below doesn’t mean it didn’t perform well in testing. We only have so much space, so we’re going to list a handful of loads that have floated to the top of the performance pile. In a future article, we’ll get into other loads and calibers.

Barnes is no stranger to the bullet making business, having produced quality hunting loads for 75% of forever. More recently, they’ve started to make projectiles for tactical and self-defense use. On the handgun front, the TAC-XPD projectiles are one of the Kings of the Hill. Barnes has made the leap from bullet maker to ammo manufacturer and their self-defense line is top shelf. Use of special propellant keeps flash down and cases and bullets are coated to resist corrosion and improve feeding performance.

The all-copper projectile features a hollow-point design that’s big enough for a bowl of Cheerios, but don’t think for a minute that the big void will clog up when it encounters heavy clothing. One reason for using all copper is that the projectile is one piece, so you’ll never have the issue of the jacket and lead core separating when encountering tough targets. That means most (and usually all) bullet weight is retained as it travels through the target.

I’m still working my way through all the caliber offerings, but have tested the following.

The .40 S&W load uses a 140-grain bullet. Fired from a Beretta PX4 Storm, it reaches a velocity of 1,047.6 feet per second. Expansion when fired into Clear Ballistics gel through four-layer FBI heavy fabric was over 3/4 of an inch with average penetration at 12.5 inches.

The .45 ACP load is also on the light end for caliber, using an 185-grain bullet. From my Springfield Armory TRP 1911 velocity measured over 1,005 fps while penetration ranged around 16 inches and expanded bullets measured .788 inches.

I’ve toured the Sig Sauer ammunition factory and seen first hand exactly how finicky they are about their ammo. When you test it, you’ll find that velocities are shockingly consistent which is a testament to care during the manufacturing process.

I’ve also tested a range of caliber offerings from the Elite Performance V-Crown hollow-point series. The Sig-designed V-Crown uses a two-stage, for lack of a better description, cavity design that provides the right balance of expansion and penetration. 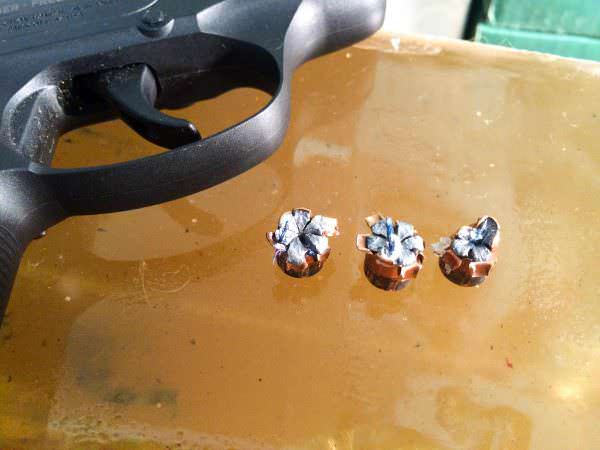 .380 ACP bullets are notoriously unreliable when it comes to expansion, especially when fired from pocket guns like the Ruger LCP. This Sig Sauer V-Crown load tested well.

Here, I’ll call out the .380 ACP load. Usually, .380 ACP hollow-point performance is finicky. It’s a (relatively) slow round, so there’s less energy to work with to drive both penetration and expansion. Tested from the tiny Ruger LCP, penetration averaged 14 inches while expansion exceeded 1/2-inch, and that was driven by average velocity of 881.5 feet per second.

I’ve got a thing for .357 Sig. Its classic 125-grain loading comes really darn close to matching the ballistics of a 125-grain .357 Magnum cartridge, and you can shoot it from semi-automatic pistols. The case dimensions are similar (not identical) to the .40 S&W, so it generally fits right into guns built for that common caliber with only a barrel change and sometimes a recoil spring swap. The bottleneck cartridge shape helps it to be one of the most reliable semi-automatic rounds out there as feeding problems are rare. 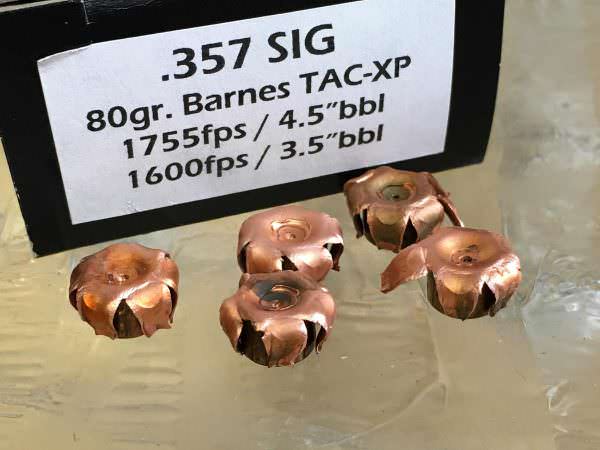 For some weird reason, I really like .357 Sig pistols. This 80-grain Doubletap Ammunition load is pretty unconventional, but works great and has low recoil.

The thing is, .357 Sig has some blast and recoil. Since it fires a 9mm-like bullet, but a couple hundred feet per second faster, recoil is snappier. The Godfather of Boom, Mike McNett of Doubletap Ammunition got creative and worked out a way to offer a nifty .357 Sig load that has limited penetration and a lot less recoil. Using the 80-grain Barnes TAC-XPD bullet, this round screams. I measure velocity at 1,782 feet per second from a Sig Sauer P320 full-size and 1,768.5 feet per second from a Sig P226. Accuracy is also outstanding with average five-shot groups from 25 yards well under two inches. My average from the Sig Sauer P320 was 1.81 inches.

I fired these into Clear Ballistics gelatin blocks through the standard FBI heavy fabric test material and every single round expanded past maximum diameter. The range of expansion was .54 inches to .78 inches and penetration varied accordingly from 12.25 to 16.75 inches with most projectiles going just under 13 inches. 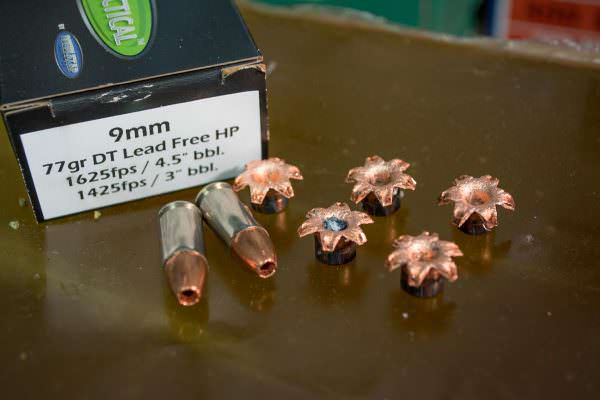 If you carry a compact 9mm and want reliable expansion with controlled penetration, check out this creative 77-grain offering from Doubletap.

With a light-for-caliber 77-grain bullet, this load develops 1,358.5 feet per second from a Springfield Armory EMP. Penetration averaged 10.5 inches and expansion averaged .65 inches.

Another offering that’s proven solid across the board in my testing so far is Federal Premium’s HST. While it may seem like HST stands for Hydra-Shok Two, the Federal folks claim it’s just a cool marketing name with no significance to the letters. I’ll call out the .45 ACP 230-grain load here because those heavies are often hit and miss when it comes to expansion. As most travel below 900 feet per second, there’s not excess velocity to help overcome fabric barriers which may dampen the expansion effect. This load is one of the exceptions to the rule. Clocking in at 905 feet per second from my Springfield Armory TRP 1911, the penetration depth through heavy fabric and into Clear Ballistics gelatin 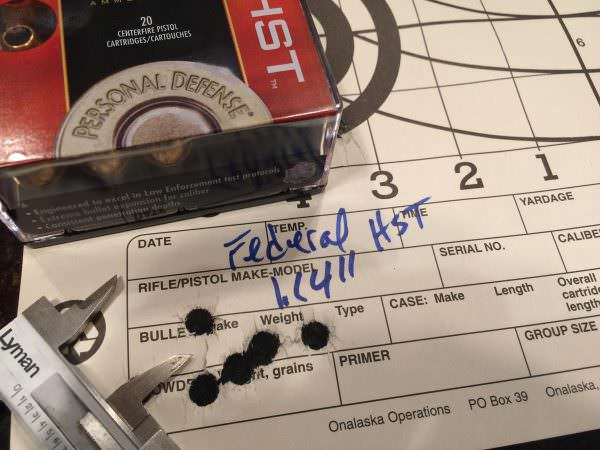 It’s hard to go wrong with most any Federal HST caliber like these 230-grain .45 ACP’s. Accuracy is pretty impressive too.

There are lots of other choices out there that will do the job, just be careful to make sure that the specific caliber choice you pick works as you expect with your specific gun. The brand name on the box is always a good indicator, but all loads in all calibers may not perform to equal standards.