Four Questions to Ask in Your Next Gun Control Debate Is there correlation, much less causation in the gun control debate?

Last month we talked about how to win the gun control debate. You can read it here, but the Cliff notes are as follows:

The bottom line is this. When arguing the topic, ask questions. Let the other side answer their own arguments. If they respond that they don’t know, you have a perfect opportunity to provide an answer that was asked for, not one shouted at them. Then let them go off and stew on that at their leisure. Who knows? Maybe they will change their mind.

Obviously, it’s important to know the answers to any questions you might ask, so here are a few to start the process.

Has murder really gone down in Australia Since Their Gun Ban?

In 1996 Australia implemented their buyback program. Well, “buyback” is a misnomer. What people don’t like to mention is that it was a mandatory program. “You will turn in your guns, but we’ll be nice and pay you something for them.” Estimates indicate that this program collected somewhere between 650,000 and one million guns. Sounds great, right? Well, considering that there were somewhere between 2.5 and five million guns to start with, the buyback only netted somewhere between a third and a fifth of the guns on the street. So, just to be clear, the “gun ban” left somewhere between 65 and 80 percent of all guns in circulation.

So what did the buyback accomplish? Proponents point to “gun homicide” and “gun suicide” reductions. Hmm. It’s almost as if it’s worse to be killed with a gun rather than some other method. In fact, over the six years after the buyback, overall homicide didn’t change. Additionally, in two of those years, homicide went up. The other fact often left out of the debate is that “gun homicide” was already declining before the ban. After those six years, overall homicide continued in a gradual decline, just like that here in the United States. Hold this thought for a second.

While homicide was settling down, gun ownership again increased in Australia. Now it’s actually higher than it was before the ban. Yet homicide didn’t go back up. If there was a causal relationship, wouldn’t one expect to see that?

Are a lot of people killed with “assault rifles?”

According to the FBI, in 2016, 374 people were murdered with rifles of any kind. That represents about a 19:1 ratio of handgun to rifle involvement. The FBI reports that 3,263 murders were committed using firearms of unknown type. Just to be really conservative, let’s categorize the right amount of unidentified guns too. Using the 19:1 ratio, we can add another 171 murders to the rifle category. That brings the total to 545. Even if we assume that every single one of those cases involved an “AR” type rifle, then it’s still less than the number of murders committed by punching and kicking. That number was 656 in 2016. Knives were involved in 1,604 murders, and blunt objects were used in 472 cases.

So let’s summarize. Those “assault weapons” (quotes intended and you know why) were involved in fewer murders than bare hands and feet, less than two-thirds as much as knives, and about the same as bats, clubs, and hammers.

What do you think is involved with more deaths, guns, alcohol, or drugs?

In 2016, 15,070 people were murdered in the United States by any method. Of those, 11,004 involved the use of a firearm of any type. Also in 2016, 10,497 innocent people were murdered by drunk drivers. Let’s look at one more data point. Just during the single year of 2016, approximately 64,000 people were killed by drug overdose. If you want to equate the two arguably self-inflicted death categories, drug overdoses and suicides, there were 44,173 suicides in the US. Of that, the victim used a firearm in 22,018 cases. So, 22,018 people killed themselves with guns, 22,000 more killed themselves by other means, and 64,000 people killed themselves with drugs.

Does England Have Fewer Murders Than the United States Because of Gun Laws?

The short answer is that England and Australia have always had lower murder rates than the United States. For 100 years or more that’s been the case. Guns or the fact that we call oil-boiled potatoes french fries while Brits call them chips has nothing to do with it.

To illustrate the point, let’s look at pictures. Here’s one from Pinker, 2011, The Better Angels of Our Nature: Why Violence Has Declined. It’s a clear view of the past 100 or so years or murder rate data per 100,000 people. As you can see, the United Kingdom has always had a murder rate of about one per 100,000 people. The United States rate has varied from a high of about ten down to the current level of about four per 100,000. What’s not so clear on this graph is that the massive United Kingdom gun ban of 1997 didn’t cause the century-old murder trend to fall. In fact, it increased. 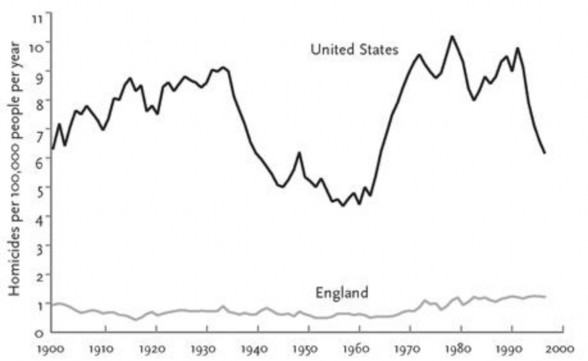 Murder rates have always been different between the UK and US. Maybe it’s more than just guns?

What does it mean? Perhaps we ought to look at other factors, like, oh, I don’t know, maybe the fact that our society is made up of a mishmash of immigrants (all of us) from all over the world. Just maybe, the fact that we deliberately threw dozens of different cultures into a giant melting pot melee resulted in more internal strife than a country like England which has been largely homogenous since the invention of porridge.

About a million years ago, when dinosaurs and my Toyota Sequoia roamed the earth, I went to college and studied Economics. Not Home Economics, but the number kind where you use big words like regression analysis. I won’t claim to be any kind of Economics theory expert, but I do have basic understanding of things like causation and correlation. The irresponsible use of causation and correlation are what contribute the most angst to the gun issue debates.

People on the other side say things like “England has a gun ban and fewer gun murders. We have guns and more gun murders, so we need to be like England to solve the problem.” They claim causation meaning that the gun variable between our two countries must be the only contributing factor to the difference in murder rates. They conveniently ignore the 17 trillion other variables that describe the differences between our two societies. They also conveniently ignore the historical data for each of our countries. Furthermore, they ignore fluctuations in historical data when a major variable, like a gun ban or increase in gun supply, is introduced. As we just discussed, England has always had a lower murder rate than the United States so pointing to the current set of gun issues as the causing factor is disingenuous at best.

Let’s net it all out. If all this claimed causation really existed, then we would see results like the following.

When England banned virtually all handguns and other types in 1997, murder rates would have fallen. They didn’t.

When Australia “bought back” all those guns in 1996, murder rates should have fallen. They didn’t.

When Australians gradually “re-added” all those guns to the streets, murder rates should have gone up. They didn’t.

When the United States guns on the streets supply doubled over the past couple of decades, murder rates should have gone up. They didn’t. In fact, they fell by half.

When we humans so desperately want to believe a point of view, we tend to latch on to artificial causation arguments all too quickly. The world just ain’t that simple.