Doubletappin’ with a Trio of Sig Sauer .357 Sigs. A couple of months ago, I wrote about the .357 Sig caliber. That got me all worked up to dig into the topic a bit more. You can read that article here at AmmoLand for more detail about the caliber, but in case you have a short attention span like I do, here’s the short version.

The basic intent of the .357 Sig caliber is to have a cartridge suitable for semi-automatic pistols that approximates the terminal performance of the famous .357 Magnum using a 125 grain projectile. As we know from the stories and internet anecdotes, .357 Magnum is so powerful that it’s capable of stopping a charging pachyderm even if one simply throws the cartridge at it. But seriously, over the past 80 years or so, the .357 Magnum has developed quite the reputation for stopping power, as far as pistols go anyway. That’s because a normal .357 Magnum 125 grain load leaves a 4-inch barrel at about 1,450 feet per second and delivers 584 foot-pounds of energy. 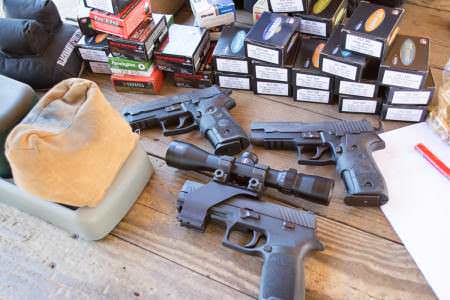 With all that said, I decided to take a closer look at some .357 Sig handgun options. What better place to look than the company with their name on the caliber? That would be Sig Sauer. I whined, threatened (that didn’t work) and begged the Sig folks to loan me some .357 Sig guns and they did. The three guns I borrowed for a bit included the P226, P229, and the brand new P320 – all chambered in .357 Sig. As a side note, I am continuing to grovel for a brand new .357 Sig option – the Nightmare. That one is a Sig 1911 chambered in, you guessed it, .357 Sig. I had the opportunity to shoot a prototype model at SHOT Show and I’m already hooked – it’s a sweet shooter.

As far as ammo, I needed ballistic aggressiveness and wisdom, so I went straight to the Godfather of Boom! That would be Mike McNett of Doubletap Ammunition. I suspect Mike is a .357 Sig fanatic like me because Doubletap is one of the only companies that loads it to the cartridge’s potential. As you’ll see in a minute, the numbers from various Doubletap Ammunition loads do, in fact, duplicate the performance numbers of the .357 Magnum 125 grain loading.