CMMG Banshee Makes Good Use of a Short Barrel The ultra-short Banshee is a perfect suppressor platform.

How short is too short? Does length matter as long as you use it right? What about diameter? Does a large caliber make up for a short barrel?

Wanting to know the answers to all of these important questions, I was super jazzed to get an advance copy of the new CMMG Banshee a couple of months ago. The Banshee is a family really, with offerings (so far) in 9mm, 300 Blackout, .22LR, and the one shown here, .45 ACP.

What makes the Banshees stand out is that they are super short and ultra-compact. In other words, they’re great for home-defense, keeping in the car, and of course, super fun range time.

The model I’ve been working with is the .45 ACP pistol variant. It uses the Gear Head Works pistol brace which has quickly become my favorite brace design, bar none. It’s got a well-rounded comb for a usable cheek weld. It’s got a locking, five-position mechanism to adjust the length of pull. The one-hand brace part is brilliant. Half of what appears to be a stock folds down to a horizontal position. This part rests under your forearm, so your big arm muscles are supporting the weight of the Banshee – not your firing hand. That allows you to concentrate on aim and trigger operation.

Since I called this out as a pistol variant, you might guess that there are rifles as well. There are for each caliber offering. Since the barrels are short, these are NFA items so you’ll need a tax stamp and to wait until Hillary finally stops making excuses to get your permission to take it home. 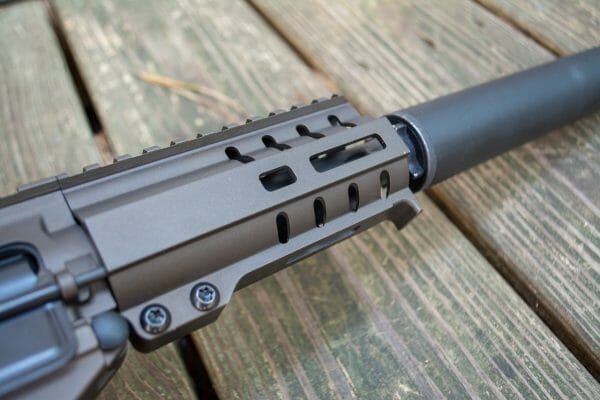 There’s a subtle stop on the handguard but it’s important to know your gun. Keep fingers out of the way!

As for the “short” part, it’s really short. The barrel on this one is just five inches long – the same as that of most full-size 45 pistols. There are a couple of considerations related to this. First, this is not a novice gun. Short front ends like this make it technically possible to put a hand part near or even in front of the muzzle. Know your weapon and practice accordingly. That’s one of the tradeoffs you need to make in return for its incredibly compact size. The other consideration is a big benefit in my book. It’s perfect for suppressing. Adding a standard eight-inch or so pistol suppressor still keeps the overall configuration amazingly compact. The suppressor also adds a margin of safety as it’s then impossible to get a finger or thumb close to the muzzle.

While the rifles and pistols (more on that in a hot second) look more or less the same across the caliber families, there are different operating systems. The 300 Blackout uses a traditional Modern Sporting Rifle-type gas system. The 9mm and 45 ACP models use a delayed rotating blowback system. 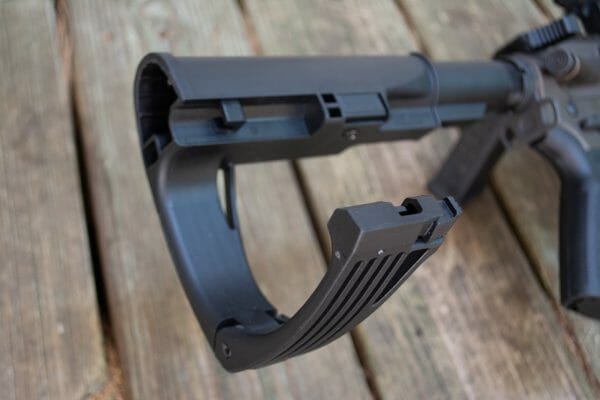 I really liked the Gear Head Works brace on the Banshee. Very versatile.

To keep things light (no heavy bolt weight required for blowback operation), reduce felt recoil and stay consistent with the MSR upper and lower receiver design and operating controls, the delayed blowback models use a modified bolt and carrier. There is still a gas key on top, but it’s plugged, and there is no gas tube. The charging handle is the same and works as you would expect on any AR-type rifle. When fired, the pressure pushes back on the bolt. Angled cuts on the bolt lugs cause it to rotate and unlock so it can travel backward into and with the carrier. There is an internal spring inside the carrier that applies forward pressure to the bolt, so it relocks properly. It’s kind of a neat system, especially how it leverages the same receiver design as the other members of the Banshee tribe.

At the range, it became immediately apparent that this is a fun gun to shoot. It’s light. It’s handy. It’s easy to shoot from a standing and unsupported position. It’s perfect for a zero-magnification red dot. After accuracy testing, where I used a Steiner P4Xi 1-4x optic for precision, I installed an Aimpoint Micro. That one was just right: small, light, and fast.

After shooting it in its native configuration for a couple of outings, I installed a SilencerCo Octane 45 suppressor on the Banshee for some “more bullets, less noise” shooting. Nearly all .45 ACP rounds are subsonic by nature, so quiet operation is mostly a given. Here, the speed of sound is about 1,133 feet per second, so it’s a rare and very lightweight .45 ACP bullet that will break that velocity when fired from a five-inch barreled gun. So, without a sonic crack, the suppressed Banshee was, counter to its name, very quiet and gentle. 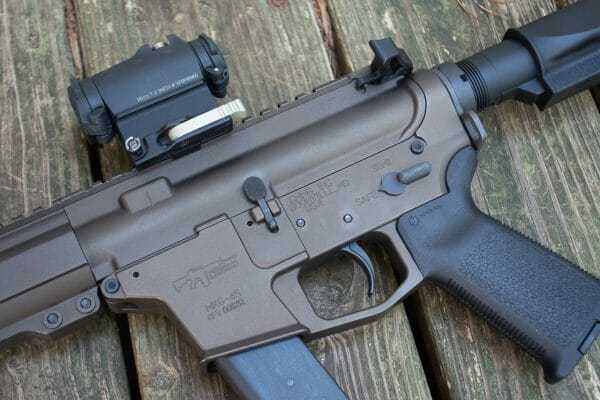 This 45 ACP Banshee looks like an MSR, and the controls are the same, but it’s a delayed blowback rotating bolt system.

For kicks, I shot a pile of five-shot groups from 25 yards to see if there was any difference. Interestingly, the group size shrank noticeably across the board from my unsuppressed testing. Unsuppressed, most groups hovered around 2.5 inches with a couple breaking the two-inch mark. Yes, some of the improved accuracy when suppressed might be a result of less bang and flash, hence less distraction for the shooter. However, I was using a solid rest through all accuracy testing, so there seemed like the Banshee liked something about shooting suppressed, maybe the extra weight on the barrel to steady things.

While the Banshee is a .45 ACP rifle or pistol, it’s built to safely handle the 450 SMC round from Doubletap Ammunition as well. We covered those here a while back, but the short version is this. Heavy brass, small rifle primer, and more pressure make for faster and heavier bullets from a .45 of sturdy construction like this one.

I accuracy tested seven different types of ammo, three of which were 450 SMC cartridges, and not one group exceeded two inches center to center. In fact, the best of the bunch was a five-shot, 25-yard group using the Doubletap 450 SMC load with 160-grain Barnes TAC-XPD bullets. That one measured just .95 inches.

This is a neat little pistol or SBR depending on which version you like. At great personal risk of denting the family budget, I kinda want to send a check in for this one and make it my bedside gun.