The Army’s new handgun, the Sig Sauer P320, is a polymer-framed, striker-fired design, but there’s a lot more.

USA –-(Ammoland.com)- You’ve probably heard by now that the United States Army has selected a new handgun platform. In case you haven’t, after years of searching, testing, and generating metric tons of paperwork, the United States Department of Shooting and Spending has determined a winner: the Sig Sauer P320. The last time a big switch like this happened was back in 1985, the same year that Coca-Cola introduced that “New Coke” thing. Coincidence? I think not. Not only did the Army switch handgun platforms from the 1911 to the Beretta 92 / M9, they switched calibers from .45 ACP to 9mm. This time around, the caliber part is a little bit squishy as the finalist guns were all somewhat multi-caliber in nature.

So what’s the big deal about the Sig Sauer P320 that enabled it to earn the prestigious $500+ million Army Modular Handgun System (MHS) contract for guns, parts, and services? Let’s take a closer look.

First and foremost, the P320 does away with the double-action / single-action operation that’s been in use the past 22 years. That’s neither a benefit or a drawback, it just is. There are great reasons to choose a double-action / single-action. There are great reasons to choose a striker-fired design like the P320. They’re just different. So, just to be clear, the P320 as a striker-fired gun has the same trigger pull sensation from first to last shot. The one sitting on my desk as I write this has a 6.25-pound trigger weight each and every time. In theory, when your business is teaching hundred of thousands of people to shoot a handgun, that constant trigger press makes things easier. It’s heavy enough to minimize the risk of an inadvertent discharge but light enough to facilitate accurate shooting.

The other big visible difference from the Beretta M9 is that the Sig Sauer P320 is made of plastic, or at least the frame is. In fact, most of the MHS entries from Beretta, Smith & Wesson, and Glock were polymer-frame guns. Not only are they lighter, but they’re also cheaper and easier to manufacture and less finicky about environmental concerns like rust. Of course, the bang-bang stuff like barrels and slides are all steel, it’s just the support infrastructure that’s made of polymer. You’ll also notice a mil-spec rail up front and ambidextrous slide release levers. Legally, this chassis is the Sig Sauer P320. It’s the serialized component, so everything else is just… parts.

Those two things are the big visible differences, but what really drove the choice was the modular nature of the Sig Sauer P320. Unlike most pistols, the “gun” portion, at least in a legal sense, is a self-contained fire control system chassis. This central assembly contains the trigger, striker, ejector and other fire control gizmos and simply lifts out of the frame. The grip frame, barrel, recoil spring, and slide are just non-serialized parts. Why is that a big deal? The “gun” has no caliber, length, height, or weight. All of that depends on the parts you use around the “gun.” For example, once you have the fire control chassis, you can use it to assemble a 9mm full size, .40 S&W compact, or perhaps a .357 Sig Sub Compact, or virtually any other combination of frame size, barrel length, and caliber. With the Sig Sauer P320 design, all of these components are just parts, and can be mixed and matched to change size and caliber.

Not having been on the Modular Handgun System selection committee, I can only guess, but I’d bet lunch that the idea of having interchangeable plastic frames had a lot of appeal for the Army folks. Some people have big hands while other Presidents, I mean people, have small hands. Sure, there are solutions on other pistol platforms that adjust grip size with insert grip panels attached by pins. But if you’re buying a billion guns that are going to get abused in the worst of conditions for a couple of decades, I would think that having whole frames with different grip sizes would be an appealing thing. No loose parts, no pins, and no grip panels to track and reconfigure. Plus, if one gets destroyed, you can just pull another whole frame out of the parts bin and swap it out.

I suspect there’s going to be a big administrative advantage to the modular idea too. When eleventy-billion [amazon_textlink asin=’B00000ISHM’ text=’HumVee’ template=’ProductLink’ store=’apiplugin-20′ marketplace=’US’ link_id=’967af793-f22d-11e6-9111-0322472ad892′] loads of serialized items are purchased by a big bureaucratic behemoth like the U.S. Department of Endless Bidding Procedures, inventory management, and tracking becomes a really big deal. In theory, the modular system can make this a lot simpler as there is no “hard coded” association between a “gun” and it’s size, shape, or caliber. The serialized gun is the internal fire control chassis that works with any grip frame, barrel, and slide. It’s also not caliber specific (at least for 9mm, .40 S&W, and .357 Sig), so if the Army wants some of them to be configured in .40 S&W for a while, it’s no big deal. All of the components required to reconfigure guns for different applications are just non-serialized parts. Armorers are going to be busy, but at least the configuring job is simple. 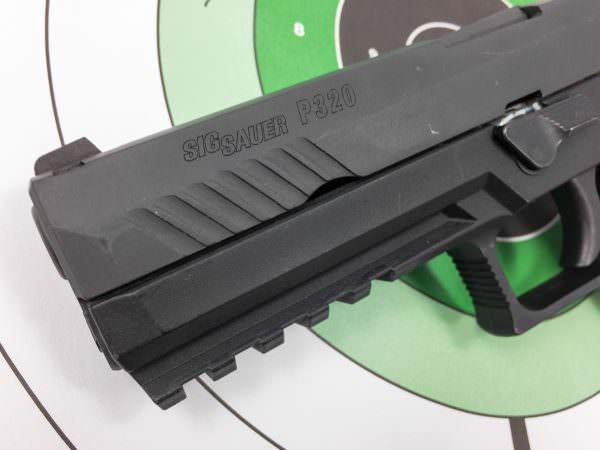 Presumably, one of the features the Army liked was the mil-spec rail.

So those are the feature basics of the Sig Sauer P320, but how does it shoot? I’ve been testing a full-size model chambered in .357 Sig for a while now, and I’ve been very pleasantly surprised by this gun. The trigger is excellent. The measured weight is 6.25 pounds, but the feel is where the P320 shines. This one has about 1/4-inch of effortless take-up, followed by 1/8-inch of constant pressure, followed by a crisp break. If you’re into riding the reset, that’s clearly audible and tactile after about 3/16-inch of forward release.

The real surprise of the P320 was its accuracy. I had three different Sig Sauer pistols, all chambered in .357 Sig, at the same time and tested them side by side using a handgun scope mounted with a UM Tactical Rail mount. I expected the venerable P226 and P229 pistols to seize the accuracy honors because they’re all metal and have storied reputations. However, just the opposite happened. Don’t get me wrong, the P226 didn’t disappoint – it easily generated 25-yard, five-shot groups under three inches almost every time with a broad variety of ammo. However, the P320 beat that handily, knocking out quite a few sub-two-inch groups. For example, the first three five-shot, 25-yard groups measured just 1.56, 1.92, and 1.61 inches using Sig Sauer’s V-Crown 125-grain .357 Sig loads. Other ammo shot equally well.

You get the idea. This gun will shoot. 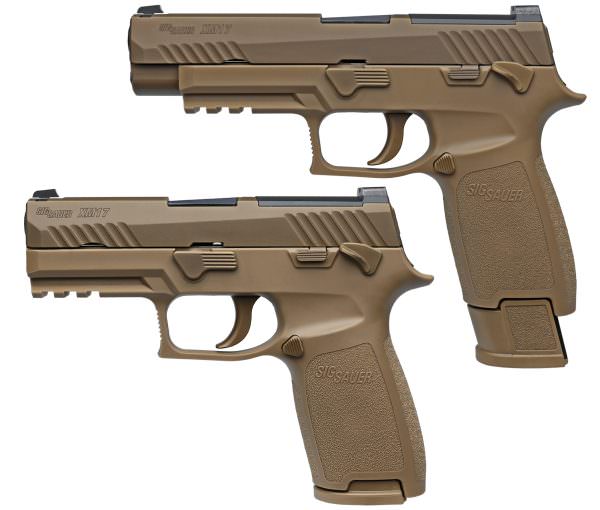 The Army version, now known as the XM17, sports a cool color and a manual safety lever.

If you look at the publicity photos of the Army MHS P320, you’ll notice an extra part that’s not on the standard commercial models, a manual safety lever. The commercial P320 has lots of internal safety mechanisms including a striker block (won’t fire unless the trigger is operated), disconnect safety (won’t fire out of battery), and a takedown safety (magazine must be revered, slide locked back, and no trigger press required to disassemble the gun.) However, the Army folks wanted an external manual safety, so Sig Sauer added one to the MHS XM17model. We can safely assume that the manual safety version will be an option for the commercial market at some point too.

So there you have it. Big news from the Army, they’re getting new pistols. Given the speed at which our Armed Forces supply chain operates, I suspect it’ll take a few centuries for pistols to arrive on the line, but it’s in progress, starting now. If you want one, I might suggest moving quickly as lots of folks are going to want “the Army’s pistol” and it would be surprising if future production capacity wasn’t strained.