You are here: Home / Guns / How to Build a Super Cool Arctic Camo AR-15 Rifle

Here’s your new rifle! Don’t worry, we’re going to put it together. Read on for details.

Hey, here’s an idea. Let’s build a super spiffy AR-15 rifle! Better yet, let’s build an AR rifle and then give it away to one of AmmoLand daily digest email readers!

Thanks to Ammoland, Aero Precision, and Brownells, the super cool Aero Precision Arctic Camo AR-15 Rifle we’re going to build before your very eyes can be yours. Stay tuned for more info on how to win it.

So what’s this rifle all about? We started with the Aero Precision M4E1 Enhanced Arctic Camo Builder Set. [Note this arctic camo pattern is only available for a short few months, but the build instruction below would work with any of the Builder Sets Aero offers through out the year.]

These kits are hand finished by Blown Deadline, and they look, well, epic. The standard kit only includes the lower receiver, upper receiver, and handguard, but the Aero folks have an option to buy a Magpul CTR Stock, Magpul MOE Grip, and Magpul PMAG 30-round Magazine – all finished in matching Arctic Camo.

We’re going to cover all the parts used in this rifle kit build in our complementary feature, “Aero Precision Dream AR-15 Rifle Project – Picking Parts & Components“. In this article, we’ll focus on how you can build the same AR-15 rifle and show you how we put it all together, including the gun smithing tools we used to make the complete AR15 rifle kit build go smooth.

While you can build your own AR-15 rifle kit on the cheap with fewer tools, having the right ones makes the job a lot easier / fun. More importantly when you have a sweet custom finished rifle like this one, using the right tools reduces the odds of unsightly scrapes, scratches, and dings. You can buy all of these at Brownells and have them in your workshop in a couple of days.

Get a Brownells AR Armorer’s Wrench. You’ll use this forever, and it has many purposes including installing the receiver extension, barrel nut, muzzle devices, and attaching torque wrenches.

You’ll want to stake the receiver extension nut in place so it can’t come loose. A 5/32″ Center Punch like this will do the job.

There are other nifty tools available, but you can get the job done with this basic set of gunsmith tools. Lets get to the gun building.

Build Your Own Ar-15 Upper Receiver

For this AR15 rifle build we used an Aero Precision 18″ .223 Wylde Fluted Stainless Steel Barrel . Aero Precision includes a custom barrel nut wrench. Well, it’s more of a flat that sticks on the end of a torque wrench – you can’t use it on its own. (check the image below) But it does perfectly fit the fancy barrel nut to which the handguard mounts. Factory specs call for tightening the barrel nut to a torque of between 35 and 60 foot-pounds so, after coating the receiver threads with some Loctite Silver Grade Anti-Seize Stick Compound, I used my torque wrench to tighten this to 50 foot-pounds.

Remember to make sure the nut is properly aligned with the gas tube hole so the tube can enter the upper receiver unimpaired.

This barrel is cut for a .750-inch gas block, and it slipped into place perfectly. First, I pinned the Brownells Black Nitride Gas Tube into the Midwest Industries Low Profile Gas Block, then positioned it on the barrel taking care to make sure that it was entirely vertical. This block clamps down with three hex screws and the block includes red Loctite to make sure everything locks in place securely. At this point, we’ve got the barrel, barrel nut, gas block, and gas tube installed, so it’s time to mount the handguard.

The Aero Precision Gen 2 Enhanced Handguard has a nifty mounting system. A counter-threaded bolt draws two braces towards the center of the handguard where it mounts to the barrel nut. Read the instructions carefully, and you’ll correctly center this bracket on the first try. An included hex wrench is all you need.

I’ve always been partial to the tried and true Smith Enterprise Ar-15 Vortex G6-A3 Flash Eliminator and that’s what we chose for this AR rifle build. Since this flash hider has no required orientation, you don’t necessarily need a 1/2″ Crush Washer to give you perfect alignment as you do with a standard A2-type hider, but I used one anyway. The reverse pressure helps keep the flash hider mounted securely on the threads. I did use a couple of drops of Red Loctite Thread Locker as well. If you win and this rifle ends up at your place, then you want to change the muzzle device, gently heat it to release the Loctite before trying to remove.

Voila! Now we’ve got a completed AR15’s upper receiver, and it looks great. It’s time to build out the AR lower.

You’ll need a Lower Receiver AR15 Parts Kit with latches, pins, and springs. We got one without a trigger group because Brownells provided a Geissele AR trigger set.

We get to start with an easy one. Technically, no tools are required although the Brownells vise block for the lower receiver makes most of the remaining steps much more manageable. It’s like an extra pair of hands to hold your lower receiver securely while you do important fiddly stuff with the parts.

The lower parts kit includes a spring and plunger that go into the receiver. Install these, compress them, and hold the bolt catch and release lever in place. Most kits use a roll pin to hold this part and pressing or driving the pin is is where many folks scratch their rifle build, but the Aero lower receiver uses a small pin that operates as a hex screw, eliminating the danger of scratching or worse, breaking your lower..

This one takes a bit of patience because the parts are small and under spring pressure. If you’re going to do more than one rifle, you might want to invest in a Brownells AR-15 Pivot Pin Detent Installation Tool. I did it the hard way without too much grief. Install the detent spring into the receiver followed by the small detent pin. Using a punch, compress that into the receiver while installing the pivot pin. Be careful not to let the spring and detent pin fly because they’re small and get lost easily. The pivot pin has a flat side and interior channel that captures the detent pin so once installed; the pivot pin won’t come entirely out of the receiver.

Depending on the trigger system you choose, instructions may vary. The Geissele SSA Trigger we chose for this rifle installs like a standard AR-15 trigger group. The trigger goes in first, and you can use the alignment punch to hold the trigger and its spring in alignment with the holes in the receiver. Install the trigger pin while driving out the alignment punch. In this case, the Geissele kit included a slave pin that held the parts together while I installed the permanent trigger pin. Once that’s in place, you can remove the hammer pin, install a bit of lubricant in the hole, then place the hammer and spring in the receiver, taking care to rest the hammer spring legs on top of the trigger pin. The closed loop of the hammer spring should be behind the hammer body itself.

Now, drop the safety detent pin into the receiver hole.

Now that the tube is installed, you can insert the buffer spring and buffer. The retention pin will hold the buffer and spring in place.

We installed a Vortex Strike Eagle 1-6×24 Optic using the Warne X-Skel Scope Mount. To do this right, you’ll want a small torque wrench like the Nightforce Scope Ring Torque Wrench so you can tighten the scope rings properly. This Warne system calls for 25-inch-pounds of torque. This rifle is ready for range testing, so stay tuned, and we’ll cover that in the next story. 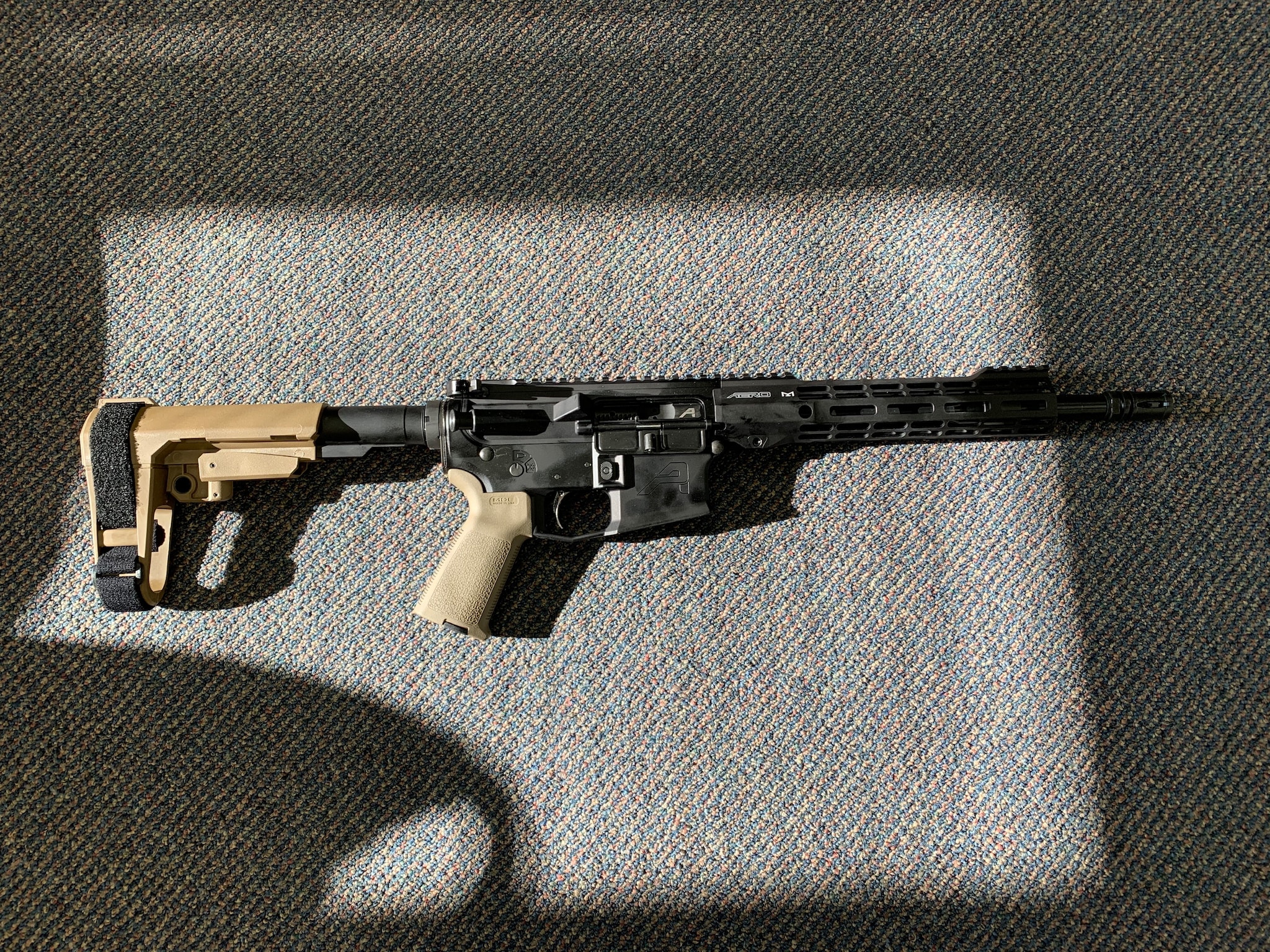