Is Bigger Really Better? A Look at Big and Little ARs Downrange So what are the real differences between “big” and “little” AR rifles at longer range? Let’s find out.

We can all probably agree that AR-type rifles are great for shorter ranges, say zero to a couple hundred yards. But what happens when you start to move out to 400, 600, 800, or even 1,000 yards? Will an AR-15 reach that far with the right ammunition? Does an AR-10 chambered in a larger caliber like .308 or 6.5mm Creedmoor make that much difference?

Let’s take a closer look using a couple of example rifles. First up is the Aero Precision COP M4 rifle with a 16-inch barrel. As a “big AR” comparison, we brought out a Smith & Wesson Performance Center AR-10 chambered in 6.5mm Creedmoor. Last, as a “classic” AR-10 example, we used a Stag Arms Stag 10S AR-10 chambered in .308 Winchester.

For each rifle, we’ll choose one type of ammo that’s reasonably representative of the caliber for comparisons. We’ll make an exception for the .223 / 5.56 and use a 55-grain “standard” and 77-grain “long-range” option.

Also, keep in mind that the performance numbers here are from my exceptionally low altitude of about 30 feet above sea level. If you live just about anywhere else, your performance numbers will be better, meaning that your thinner air will allow bullets to fly farther faster.

So, when you leave the world of factory labs and special testing barrels, what will those rifles do in real-world conditions? Let’s compare some of the common performance attributes. 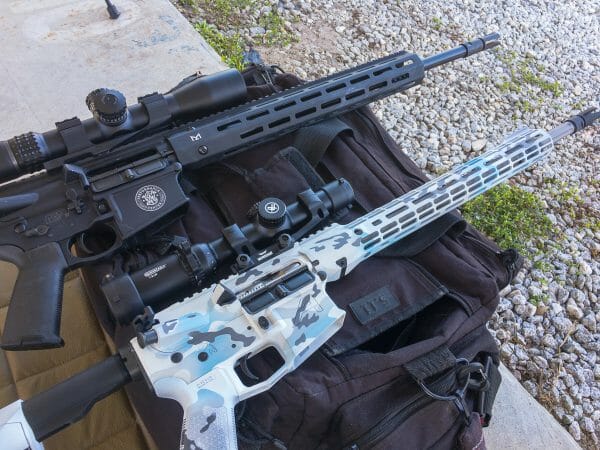 The significant difference between the AR-10 and AR-15 when it comes to long-range performance is the cartridge options that open up from the larger (longer) magazine well and bolt structure.

So what do the big and small AR rifles deliver in terms of velocity, not only at the muzzle but well down range? We used a Shooting Chrony Beta Master Chronograph placed 15 feet in front of the fiery hole to measure the actual velocity and calculated the down range speeds based on the specific bullet type and atmospheric conditions. Again, since this shooting was done near sea level, if you live in a higher elevation, you’ll likely see that velocity carries significantly farther than what’s shown here.

Kinetic energy is dependent on bullet weight and velocity. The velocity component is where things get tricky. Heavier or lighter bullets don’t necessarily carry velocity down range better or worse depending on their weight. That really depends on their ballistic coefficient, or in simple terms, how slippery a bullet is in the air. A longer and more slender but heavier bullet may have less velocity loss down range than a lighter one that’s faster at the muzzle but less aerodynamic over its entire flight path. In the velocity chart above you can see that while the 6.5mm Creedmoor doesn’t start the fastest, it’s winning the velocity game when you get out past 600 yards.

Gravity is gravity, and as some apple-eating guy figured out, weight doesn’t matter either. If you remove air resistance from the equation, a feather and brick will drop to the ground at the same rate of speed. So when it comes to bullet drop, projectile weight doesn’t matter. What does matter is the time that a given bullet is exposed to the forces of gravity over a certain distance. If one bullet makes it to the 1,000-yard mark faster than another, then it’s exposed to gravity for less time and will drop less. As we saw in a previous chart, higher velocity at the muzzle doesn’t necessarily mean that a speed advantage will carry down range. An aerodynamic bullet can start slower than another but finish faster because it carries it’s velocity over distance more effectively.

For all the loads shown here, we zeroed the rifle at 100 yards and used an optic with a crosshair 2.8 inches above the bore.

Ponder those figures for just a second. At 1,000 yards, there is a 16-foot difference between the 6.5mm Creedmoor AR-10 and a standard AR-15. That’s over two Shaquille O’Neals tall.

To keep things simple, let’s assume we’re experiencing a 10 mile per hour crosswind coming directly from the three o’clock position. This chart shows how many inches each bullet will blow sideways at varying distances down range.

All good things in life come at a price. So if you want more energy or velocity, your shoulder is going to pay. There’s a whole lot of complex rocket surgery behind measuring recoil, and much of it depends on the velocity curve of the recoil impulse. However, for a rough comparative guideline, we can look at recoil energy. This measurement takes into account the weight of the rifle (we’ll assume eight pounds for all rifles here), the bullet weight, powder charge weight, and velocity. All outputs are in units of foot-pounds.

There’s a reason that so many scopes have the same drop compensation markings for .223 and .308. While not identical and subject to variance depending on bullet types and weights, the trajectories between the two calibers are fairly similar. If you simply want more the energy and momentum of a bigger and fatter bullet, then an AR-10 in the classic .308 caliber might be your Huckleberry.

Where things start to get interesting is with other caliber options presented by the larger magazine well and upper receiver components of the AR-10 platform. With a structure designed to handle longer and fatter cartridges safely, all sort of possibilities open up. While there are others, 6.5mm Creedmoor is a great example. Perhaps that’s why we’re seeing so many AR-10 and other semi-automatic platforms adopting that caliber.