An Interview With Top Shot, and Top Chef, Chris Cheng Over the past couple of years, I’ve had the distinct pleasure of getting to know competitive shooter and chef Chris Cheng. You might remember him from his Top Shot Season Four victory. If you read on, you’ll also learn that he won the annual Professional Outdoor Media Association’s Top Chef title. He’s just an all-around top guy, and one of the nicest folks you’ll ever meet. Oh, one more thing, he’s now a published author with the recent release of his new book Shoot to Win.

I thought it would be fun to con Chris into an interview so you can get to know him a little better and learn what a great ambassador he is for the shooting sports. Don’t tell him this is an interview, I told him my Mom wanted some background info before inviting him over for a meatloaf supper…

AmmoLand: We all know that shows like Top Shot are heavily edited, so we want some insider scoop about some of the stuff that happened that didn’t make the final edit cuts. Since all the competitors share a house, you must know who sleeps with a security blankie. Fess up, who?

Chris Cheng: Tom, I told you about my blankie in confidence. Will I ever be able to trust you again? Buy me a bourbon the next time we hang out and the answer is yes.

There are two main things that I think are worth mentioning. First, viewers got to watch all the exciting parts when the reality was we were sitting around waiting for stuff to happen most of the time. The entire competition took six weeks and we were cooped up in the Top Shot house the entire time. We’d wake up, get ready, and then it would just be a waiting game to find out when we’d be going down to the Top Shot range or take care of interviews. The moments where we’d actually get to shoot something were of course very exciting because we’d be deprived of it for so many hours.

Second, one of the most common questions I get asked is about the host, Colby Donaldson, and if he’s actually a nice guy or not. He’s a really down to earth guy who enjoyed being around firearms and the competition. And yes, his teeth really are that white in real life. 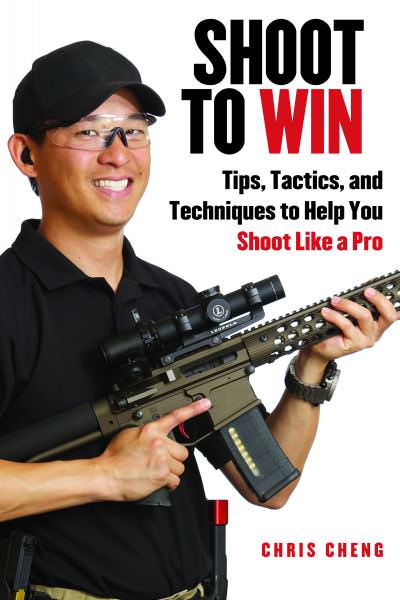 Shoot to Win by Chris Cheng

I know I said there were two things, but I’ve had a few glasses of wine tonight so there’s a third thing. We ate really well. I’m a foodie, and one of the things I was most concerned about living in the Top Shot house was not knowing what our food situation was going to be like. If we had to eat instant ramen and cans of soup for six weeks, that would have crippled me in the competition.

However, every 3-4 days we’d get a restock of fresh meat, veggies, candy, and other food and we’d spend a lot of time cooking during the downtime. I made an awesome garlic butter chicken and introduced a number of competitors to the world of sriracha and other hot sauces. We had rib eye steaks, pork chops, and fish done up all sorts of ways. We would eat dinner every night as a group and spend countless hours staring at the stars and bonding as friends.

AmmoLand: So in addition to the money, which you probably don’t care much about, your Top Shot Champ prize was becoming a sponsored shooter for Bass Pro Shops. How many bass have you shot since signing on? Largemouth or Smallmouth? And did you mount them?

Chris: The only thing I didn’t care about the $100,000 cash prize was all the taxes the government took from it. But, as they say, money spends but the title is forever. Winning Top Shot was an experience that could only happen in America. I was a self-taught amateur with no formal shooting experience who quit Google to become a pro shooter. I was cast for an internationally televised shooting competition that’s filmed in Hollywood and beat out 17 highly experienced shooters. I trained really hard and my efforts paid off. It’s my hope to inspire others to dream big, work hard and go win. I’m living the American Dream and have the gun community to thank for making a show like Top Shot possible.

Speaking of shooting fish, I’ve been dying to go bow fishing at night. Somewhere in the Ozarks would be nice. The only fish I have mounted is above my doorway, but it’s one of those annoying motion sensor singing fish. I think I might shoot it to get it to stop singing.