When I lug my ammunition testing setup to the range, I get more strange looks than Michael Bloomberg lactating at a Mayors Against Legal Governing (MALG) press conference.

That’s because I bring a couple of now-perforated trash cans full of soaking wet newspaper, some old boots and a bunch of discarded clothing. Shooting into water or plain ballistic gelatin doesn’t tell too much about bullet performance after it has passed through real-world barriers. So I assemble a suitable range wardrobe.

Recently, I brought 1/2 of a fully stocked thrift store to the range to test the Winchester PDX1 Defender .38 Special +P 130 grain self-defense load. This load is solid for .38 Special handguns, but also makes a good option for .357 revolvers. Some folks like to shoot .38 Special loads out of sturdier .357 revolvers for less recoil and wear and tear on the gun. Of course, the option is always there to load 357 Magnum cartridges whenever you like.

Considering that this load uses 130 grain projectiles, velocity was appropriate. I tested it from a Ruger LCR .357 Magnum revolver, which features a 1.875 inch barrel. That’s shorter than NY Governor Cuomo’s debate on the SAFE Act! Using a Shooting Chrony Beta Master Chronograph, I measured a bunch of shots with the chrony placed 15 feet down range. The average of the Winchester PDX1 Defender 130 grain load worked out to 903 feet per second. Not too shabby, and enough for pretty reliable expansion.

I shot another pile of these bullets into a pretty tough target to get an indication of expansion performance. While anything will expand if you shoot it into ballistic gelatin, things start to get crazy when you shoot through real-life barriers like leather and fabric clothing. To put it to the test, I shot through two layers of leather and 4 layers of light canvas. Not counting anything hard that might get in the way, this starts to approach a worst case heavy clothing scenario. 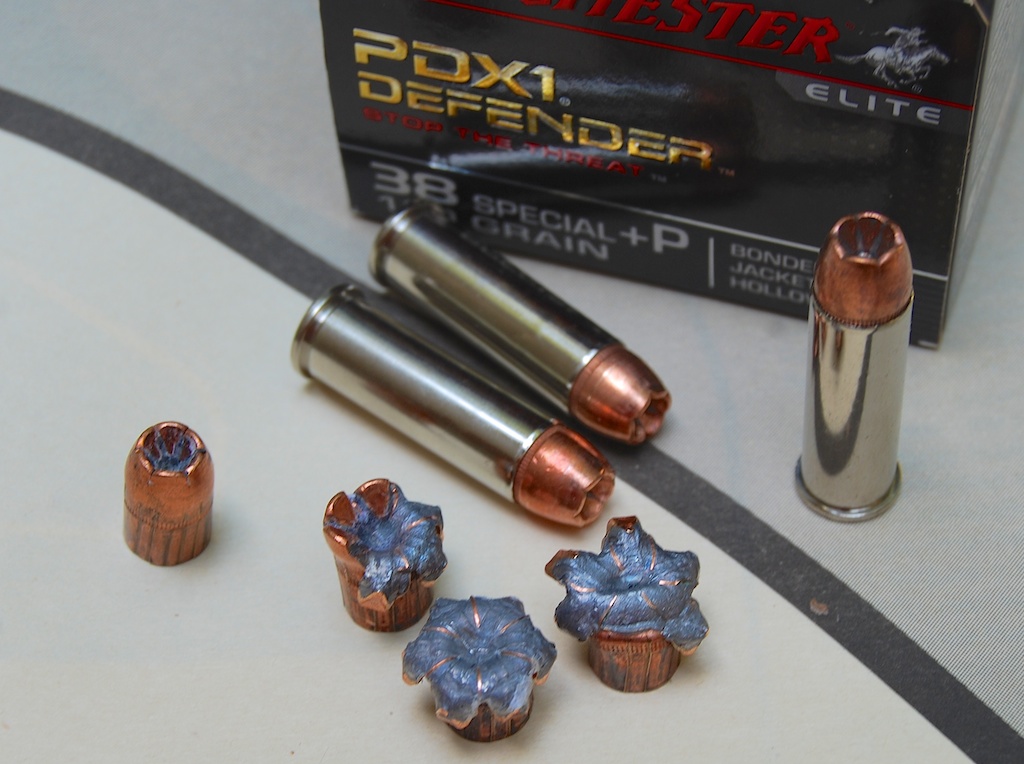 Expansion was good overall. Throughout testing over 75% of projectiles expanded properly.

I shot everything through the leather and canvas barrier into a deep container of wet pack. That’s a fancy word for soaking-wet newspaper. As you can see by the photo, most projectiles displayed good expansion. About 1/4 of the time, one would slip through with minimal or no expansion. That’s not a big surprise given .38 Special velocities out of a short-barrel revolver.

This was a good load. After testing thousands of self-defense rounds, in virtually all pistol calibers, I’ve become a big fan of bonded bullet designs. I’ve yet to encounter a quality bonded bullet that came apart while passing through a tough target. Like jacketed designs, expansion is always measured in probability, not certainty, but overall, bonded bullets have proven to be solid performers.

You can find Winchester PDX1 Defender Self Defense Ammunition at Brownells