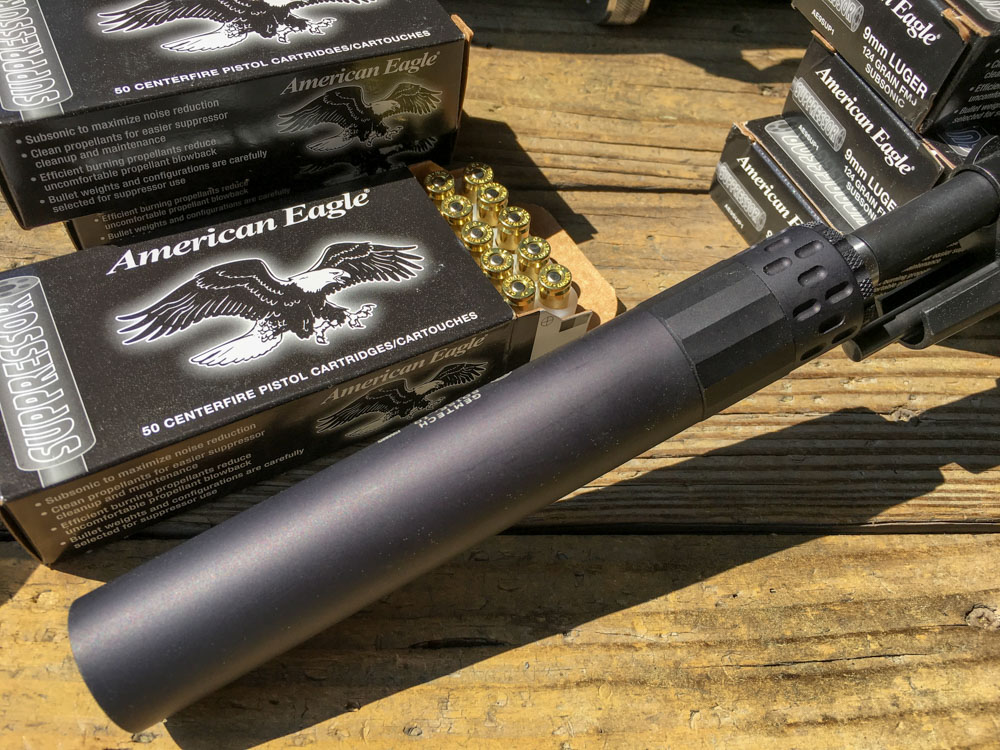 The folks at American Eagle have been quietly releasing a family of suppressor friendly ammunition. So far, I’ve tried it in 300 Blackout, 45 ACP, and .22 LR. Now, the company is shipping 124-grain 9mm ammo in the Suppressor brand family. I got my hands on a stash and brought it to the range with my trusty Beretta 92 with a threaded barrel and, for good measure, a Sig Sauer P226 Single Action Only.

Thanks to our friends at Silencer Shop, I also packed three different 9mm suppressors: AAC’s Illusion 9mm, Gemtech’s GM-9, and Surefire’s Ryder 9Ti. Just for fun, and to compare the 9mm cans against an oversized one, I also brought my SilencerCo Octane 45.

When someone labels ammo “Suppressor” on the box, it’s safe to assume that it will be subsonic. Sure, you can shoot supersonic ammunition through a suppressor too, and it makes a big impact in reducing the overall blast noise level, but you still have the sound of the miniature sonic boom traveling down range. As we’ll get to in a minute, the Suppressor 9mm load is subsonic, but that’s not the big thing.

To explain what is the big feature, let me provide a quick bit of background. The Beretta 92 / M9 is a great gun to suppress. The recoil action moves the barrel straight back rather than back and then tilting the barrel up. When you have a suppressor on a gun with a tilting barrel recoil design, the recoil forces not only have to pull the suppressor backward, but there has to be enough “oomph” to lift the muzzle, with the added weight of the suppressor, upward. Fortunately, silencer companies have largely solved reliability issues for this issue with the use of spring booster mechanisms, so this is not a big a deal as it used to be. I’ve been testing it – a lot – with just a few different 9mm and .45 suppressors…

Back to the Beretta. It’s super reliable when shooting suppressed, but the open slide design has a little bit of a drawback. With most ammunition, you’ll get anywhere from a small to large face full of burnt powder grit every time you pull the trigger. It’s one of the joys of suppressed pistol shooting. Add some liquid to your can and you get an extra special bonus – a wet face full of grit.

During my first outing with American Eagle’s Suppressor 9mm ammo, I shot it – a lot – from the Beretta 92FS. I was testing four difference pistol silencers, hence the abnormally high shooting volume. A couple of magazines in I noticed something. I was not getting a Silencer Facial – at all. Thinking I must be imagining things, I loaded the next mag with some standard 9mm practice ammo – and the powder blast to the face returned.

I know the American Eagle folks have done stuff to the powder blend in the Suppressor line to reduce fouling and muzzle blast, but apparently the good side effect is less residue coming back at you too. Very nice, unless you want to lose those unattractive blackheads.