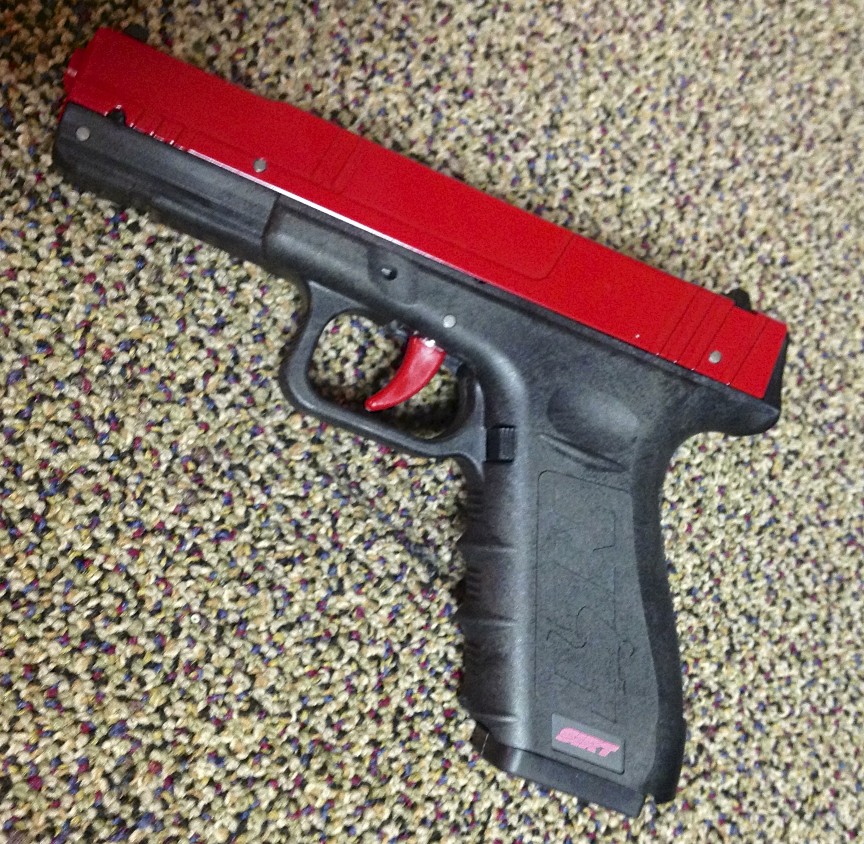 The SIRT Training Pistol from Next Level Training

Most people think of neutering in a bad way. My dogs run away for days when they hear that word.Recently we had to retrieve them from a snow cave just outside the town of Alert, located in Nunavut, Canada.

In the case of the SIRT Training Pistol from Next Level Training, there really hasn’t been a neutering of a pistol, technically speaking. More accurately, it’s been designed as a eunuch.

Eunuch [yoo-nuh k]
noun
– a man who has been castrated, primarily for some office or duty such as a guard in a harem or palace official.

Although painful, and kind of weird, our use of the term Eunuch here doesn’t necessarily imply weakness. Think about all those beefy palace guards in old Cleopatra movies. In this case, it implies strength and singularity of purpose.

You see, the SIRT is a practice-only pistol, made from the ground up as a practice-only pistol. It has a magazine, but you can’t put cartridges in it. It has a slide, but the slide doesn’t move. It has a trigger, but nothing fires – except a laser. Well two lasers actually. It has a magazine release button which drops the inert, but realistically weighted, magazine. It has a rail for tactical gun lights, rail mounted lasers, or even bayonets. If you want to make your eunuch dangerous.

In short, it has most of the components of a real pistol. But it’s designed not to fire. Ever. And that’s exactly what you’re paying for.

You can run around the house yelling things like “Freeze!” and you won’t hurt anyone.

You can aim at things (not people, people!) and pull the trigger. Thousands and thousands of times.And you will have zero risk of shooting the furniture. I shot the dining room table once, and I still hear about it at family gatherings.You won’t experience this type of social embarrassment if you practice with the SIRT.

What is the SIRT Training Pistol? SIRT has a name. It’s Shot Indicating Resetting Trigger training pistol. Get it?

The idea behind SIRT is to make quality training easy. A quick look at before and after shooting practice scenarios will give you a good idea of what it does…

That’s the basic idea. If you have a SIRT, pick it up and practice. If not, be really, really careful. As the SIRT pistol automatically resets its trigger, you can get a lot of quality trigger pulls completed in a very short amount of time. Look Ma! No muzzles! Well, just little ones for the lasers.

The SIRT is modeled after a Glock 17/22. Same basic size, same basic weight, and same basic grip angle. The magazine is even the same size and approximately the same weight as a loaded Glock 17 magazine. Why a Glock? Well, at last count, 4,627% of law enforcement officers across the country use Glocks, so the potential LE training market for SIRT Training pistols is huge on this platform. Will Next Level Training offer other form factors? Perhaps, but I suppose that depends on market demand for specific models. What is announced on the Next Level Training web site is a variation with a similar grip angle to the Smith and Wesson M&P. This is scheduled for ‘soonish’ but that’s all we know right now.

While we’re talking about how the SIRT looks like a Glock, feels like a Glock, and smells like a Glock – well, maybe not smells – we should mention that all Glock holsters we tried fit the SIRT perfectly. We also tried a number of magazine carriers for Glock magazines and those worked perfectly too.

The slide on our tested SIRT is bright red. For most users of stock guns, this clearly differentiates the SIRT as a practice gun. If you’re one to paint and personalize your real guns, simply do the same to your SIRT in a color that you recognize as “safe.” So if your real gun really is red, make your SIRT blue. Or mauve. Or Hawaiian Sunset Lagoon Mango.

The SIRT features a standard front rail, so if you use a rail mounted light or laser on your real gun, you can put one on the SIRT also. Or you can mount a bayonet. And stab the sofa as you won’t be accidentally shooting it.

One of the really big deals about the SIRT Training Pistol is the adjustable auto-resetting trigger. This means you can get as many trigger pulls as you want without doing anything to reset the trigger. It automatically resets just as a real trigger would when firing a real cartridge from a real gun. Want to practice double taps? Triple taps? Emptying the magazine to reload? No problem. As far as adjustment, depending on the model, you can tweak the initial trigger location, overtravel, take up force, and trigger break force. The trigger break can be adjusted from 2.5 to 12 pounds.

SIRT Training Pistols actually include two lasers. A take up laser lets you know when trigger pressure is applied prior to the shot break. This allows you to practice and program your finger to allow the trigger to move forward just far enough to reset. If the take up indicator laser goes off, you have let off too much pressure from the trigger. The shot indicating laser pulses when the trigger sear releases. This indicates the exact moment of the shot. If you see a dot appear right where you were aiming, good job! If you see a line or other indication of movement of that same dot, get back to practicing! With a small lever switch on the top of the slide, you can activate or disable the trigger take up indicator. I preferred using the shot indicator laser only as I found the take up laser distracting, but that is a personal preference. If you want to work on optimizing your trigger reset technique, the take up indicator is a great tool.

The SIRT comes in a durable hard plastic carrying case and includes an instructional DVD.

You can get the SIRT Training Pistol in a number of variations. The Next Level Training website features a product comparison page to help you find the model right for your specific requirements.

The highlights are that the shot indicator laser is available in either red or green. Our evaluation model had a green shot indicator laser and a red trigger take up indicator and this seems the way to go as you won’t confuse which dot indicates trigger take up and which shows shot placement. Other model options include additional trigger adjustments, magazine weight adjustments, and metal or plastic slides. The metal slide model is recommended for any active motion training use. The metal slide version is also very near to actual loaded pistol weight.

10 ways you can use a SIRT Training Pistol

We were somewhat skeptical about investing time to evaluation the SIRT Training Pistol. The idea of spending a couple hundred dollars on a gun that doesn’t shoot seemed just a little weird. But we persevered. And guess what? The value of this training method became clear in about 5 minutes of use. I’ve been using it every day. It’s safe and convenient. And your shooting skills WILL improve noticeably. And you won’t be explaining to anyone why you need a new sofa.

Next up – The SIRT-AR Bolt…