A Look Through The Redfield Battlezone Tactical .22LR Scope For testing, I mounted the Redfield Battlezone Tactical 2-7x34mm on a Ruger 10/22.

There’s just something pure and satisfying about blowing away teeny, tiny targets at moderate ranges without the expense, noise and recoil of a full size gun. While iron sights are purist and awesome, just because they’re so darn traditional, you can’t get really precise with itty bitty targets like golf balls, Tootsie Pops, Life Savers and bugs without some type of optic.

Having just picked up a new standard Ruger 10/22 for myself, I needed a fun – key word, FUN – scope for it. Enter the Redfield Battlezone Tactical 2-7x34mm. The Redfield Battlezone Tactical scope is built around a 1 inch tube, so finding compatible scope rings is easy. That one inch tube is nitrogen-filled, so I didn’t have any fogging issues with rapid temperature changes. Normally when I take any kind of camera or optic from my comfy air-conditioned home out into the blast furnace otherwise known as South Carolina, I get a good ten minutes of fog. Not so with the Redfield Battlezone.

It’s variable power ranges from 2 to 7x, which is plenty given the maximum practical range of the .22LR cartridge. If you can’t see your target at 7x magnification, it’s time to take up a new hobby, like maybe the Yeti ring toss. Magnification is adjusted via a ring mounted just in front of the eyepiece.

The Redfield Battlezone Tactical scope also features an easy to adjust eyepiece focus ring. I say easy as some scopes require so much torque to turn the eyepiece focus ring that the crosshairs come out of vertical alignment. Speaking of crosshairs, the reticle is a standard hash mark pattern, for both windage and elevation, with 2 MOA mark separation.

This scope is pre-calibrated for a standard, high-velocity .22LR round. More specifically, it’s designed to be spot on at distances from 50 to 150 yards if you use 36 grain .22LR bullets traveling at 1,260 feet per second. There’s plenty of .22 ammo right in that range, or close enough for government work. 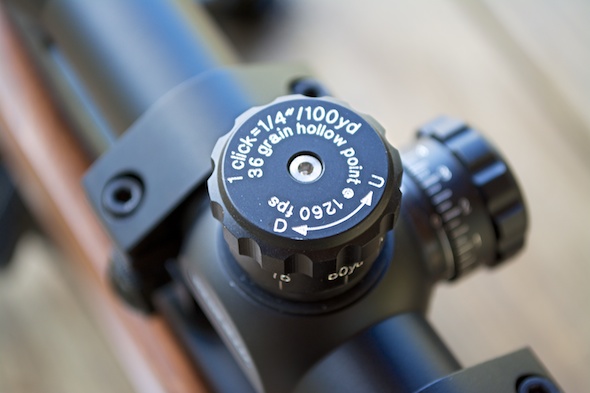 Turrets are fairly standard ¼ MOA per click adjustable for windage and elevation.

The Redfield Battlezone Tactical 2-7x34mm scope comes with two different elevation turrets. The one pre-installed at the factory is the standard minute of angle (MOA) version. It’s calibrated for ¼ MOA per click, or ¼ inch of vertical adjustment per click at 100 yards. Where the .22 plinking fun comes into play is with the other included elevation turret. About 30 seconds with a small screwdriver and you can install that one instead of the factory default MOA version. Instead of being marked in minute of angle, it’s pre-graduated to show yardage for that standard high-velocity .22LR round. The alternate (included) elevation turret is pre-marked for ranges from 50 to 150 yards.

Simply zero your rifle, with appropriate ammunition, using a 50 yard target. From that point on, you spin the wheel of fortune to the yardage desired. The turret is clearly marked with 50, 75, 90,100, 110, 120, 130, 140 and 150 yard settings. Each click still represents ¼ inch adjustment at 100 yards, the turret simply allows you to dial in yardage instead of doing all that complex math between shots.

This just screams for a test doesn’t it? Between you and me, it was really more of a great excuse to do a whole ton of plinking with a hot scope on a Ruger 10/22, but at least I plinked (plunked?) somewhat scientifically. To take my wobbly hands out of the equation, I set up on one of the new Blackhawk! Sportster Titan III two-part rests. I’ll cover that gear separately, but for now it’s not only portable, but infinitely adjustable and stable.

Although I have collected a wide variety of premium .22LR ammo, I found that my Wal-Mart special Winchester bulk pack had the closest ballistic match. This is the 555 round box filled with 36 grain copper plated hollow point ammo clocked at 1,280 feet per second. Not dead nuts on for velocity, but darn close. And remember, the rifle here is a standard Ruger 10/22 and not an Anschutz 1913 Super Match, so close is good enough. Hey if we can build a national healthcare website for a half billion plus or minus a hundred million, that’s close enough right?

First, I zeroed the Ruger 10/22 and Redfield Battlezone Tactical scope at 50 yards. Although I had the scope zeroed properly by the third shot, I fired an additional 50 rounds or so just to be sure. Also because it was fun dialing up the Battlezone zoom to 7x and trying to hit spent shotgun shells out near the 50 yard mark on my range.

By the way, zeroing is easy and requires no tools. Just shoot and click away til you’re happy. Then lift the turret cap straight out until it spins freely, move it to the 50 yard mark, and drop it back down into place. Piece of cake. I didn’t even have any parts left over.

Next, I wanted to verify the pre-calibrated turret markings at different ranges. My range is marked pretty well out to 120 yards so I was able to plink away at targets 75, 100, 110 and 120 yards away. With this ammo, the scope was dead on.

The last test was a return to 50 yards to make sure there was some repeatability. Not a problem. 50 rounds later at 50 yards, I was still on target with the same point of impact.

Just for kicks, I switched to CCI Mini-Mag .22LR 40 grain rounds at 1,235 feet per second – heavier and slower than that specified for the BDR markings. No worries. While I did not shoot targets, I did plenty of dirt clod plinking at various ranges and found no significant difference once I re-zeroed this ammo at a 50 yard target first. So don’t get too stressed out about your specific ammo ballistics. Find one you like that’s close to specification, zero it and you’re off to the races.

This is a fun plinking scope. And it’s affordable. You can find it at Cabelas for about $190.

The only mistake I made with testing (so far) was not mounting it on something like a Colt / Umarex M4 Carbine .22LR rifle. It’s called a Redfield Battlezone TACTICAL after all. That’s next…