One good thing about the recent Army Modular Handgun System Trials is that the process lit a fire at many gun companies to create an entry pistol capable of winning the big bucks government contract. Of course, the intangible value of being chosen as the U.S. Military’s sidearm and all the associated bragging rights pushed gun makers to put their best foot forward too.

One of the many contenders for the AMHS award was the Beretta APX. Introduced in 2016, just in time for the trials, the APX is Beretta’s first mainstream striker-fired pistol. It shares many base features with other polymer-frame striker pistols like tilt-barrel, locked-breech operation, but includes many Beretta signature and design features equally applicable to the Army contract requirements and needs of civilian users.

One of the spinoffs of the APX line is the RDO (Red Dot Optic) model. This one comes with a slide cutout behind the ejection port that allows insertion of one of four different plates to accommodate red dot sights from Burris, Trijicon, Leupold, and C-More and any others that share the same footprint as one of the above. The pistol comes out of the box with a cover plate installed so you can use it without a red dot at all if you like. Given the number of pistols coming to market ready for optics, you can bet it’s a going to be a thing. Remember, there was a day when Winchester lever-action rifle users scoffed at the idea of putting scopes on rifles… “Wait, you think people are going to put stuff made of GLASS on top of their rifles???” Time will tell, but I’ll wager that optics-equipped pistols will become as common as scoped rifles before too long. With all that said, let’s take a closer look at the Beretta APX RDO Pistol. This one is chambered in 9mm, but the company also offers a .40 S&W version.

It’s a striker-fired pistol, so every pull is exactly like the previous. The trigger itself has a safety leaf. This must be depressed to unlock movement of the trigger itself. The trigger face is flat and fairly wide. The take-up is maybe 1/8th of an inch followed by another 1/8th of an inch of constant pressure before the break. I measured the trigger weight at exactly six pounds. The whole range of motion is smooth with no grit, and the break is a surprise one – there is no telltale “shelf” to let you know exactly when it’s going to go. It’s one of the few pistols I have where I can’t tell exactly when the shot is going to break. 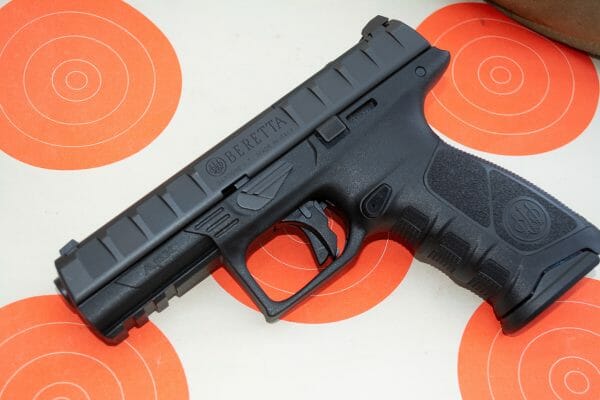 The Beretta APX, while full-sized, feel slender in the hand – much moreso than its predecessors in the 92 / M9 family.

The slide doesn’t have cocking serrations on the front or the back. Instead, it takes an entirely different approach, presumably for both cosmetic reasons and to work equally well when the user is wearing gloves or is in adverse weather conditions. There are seven vertical “wedges” spaced long the length of the slide. These protrusions, about a finger-width apart, provide the necessary grip to operate the slide from any position – front, middle, or rear. It looks cool, but I find it functional too. There is no overtly rough or sharp texture to tear up hands or clothing if you carry concealed.

The controls are ambidextrous. Slide lock levers are on both sides. The magazine release button is oversized and placed on the left side of the frame, but you can flip it to the opposite side for left-handed operation. 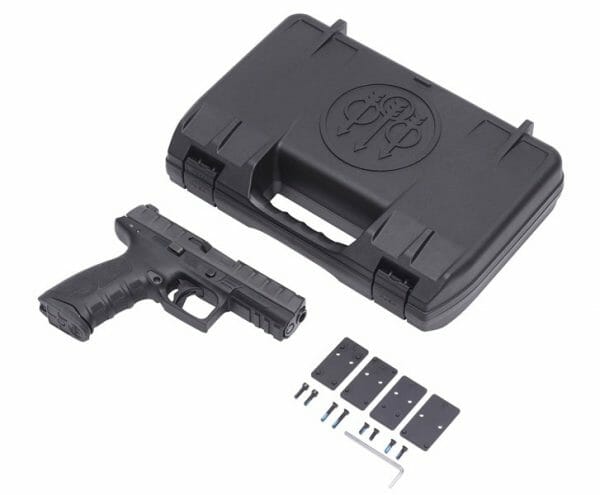 The sights on this RDO model are standard white dot. Unlike previous Beretta models, both front and rear sights are dovetail mounted, so if you want to install night sights or suppressor-height sights, that’s easy to do. After shooting this pistol a bunch, I’m kinda thinking I might want to put a fiber-optic sight on the front, mainly because they’re easier to in a variety or light conditions and against different backgrounds. The rear sight has a small ledge in the front, so you can use it to rack the slide in a pinch. The overall shape of the housing is like a ramp with the tapered front cut off.

To meet the needs of the MHS contract requirements, the APX is a modular design with the fire-control chassis being removable. This means that you can relocate the serialized “gun” portion to another polymer frame of different size. This allows the same “gun” to become a compact, full size, a perhaps a different color. Of course, at some point, you might also end up replacing side and barrel, so I see this feature as useful for different frame heights, colors, and shapes more than conversion to a miniature variant. Also to support different hand sizes, the APX comes with small, medium, and large backstrap inserts. Be sure to read the instructions before trying to change these as you have to flip a locking bar from inside of the ejection port to remove the grip panels. 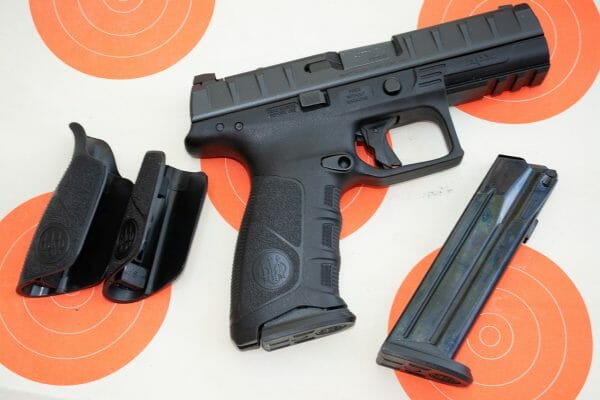 The 17-round magazines remind me of those on the PX4 pistols. They have steel bodies and witness holes, so you know exactly how many rounds are loaded. Two are included in this model along with a simple magazine loading tool. 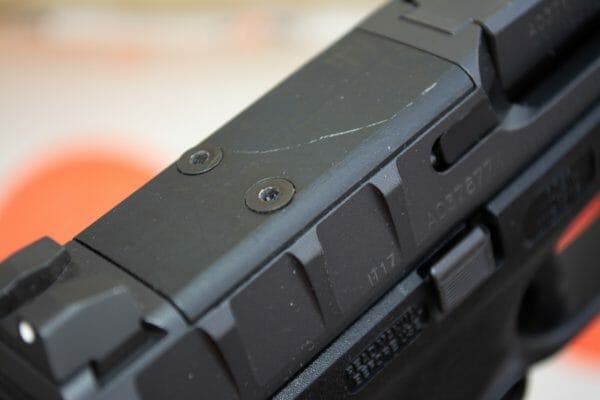 The pistol ships with this cover plate installed so you can use it without an optic too.

The field stripping procedure is a bit of a sobriety test if you want to use the “no trigger press required” feature, so follow the instructions carefully the first time you do it. The APX has a striker release button on the right slide of the frame just above the beavertail. After removing the magazine and locking the slide back, depress this recessed button with a punch, ballpoint pen, rifle bullet, or whatever else fits. While holding the button down, let the slide close. Once it’s fully closed, you push a large button on the opposite side of the takedown lever in a fraction of an inch. That allows you to rotate the lever, freeing the slide assembly for removal. Once you see how it works, it’s pretty easy and takes just a couple of seconds. Or, you can choose the old-fashioned way and press the trigger after verifying an empty chamber and using a safe backstop. Once the striker is released, you can press the takedown lever button, rotate it, and remove the slide. From that point, everything is normal for a semi-automatic pistol. The captive recoil spring pulls out allowing you to remove the barrel. Piece of cake.

The best group of the day came from the APX RDO paired with Sig Sauer V-Crown 124-grain ammo.

As for accuracy, one of the requirements for the MHS pistol is that “test firearms have hits on a 4-inch target at 50 meters at least 90 percent of the time throughout the gun’s lifespan.” To get a feel for the pistol’s accuracy potential, I set up some targets 15 yards down range and shot groups using the iron sights. I solicited the help of my range officer buddy (it was a quiet day at the shooting range) because I wanted some subjective opinions on the gun from him and because he’s an excellent shooter. Here’s how five-shot groups came out:

Based on those results, I’m confident that the APX is plenty accurate, especially when paired with the right ammo.

Overall this is a nice pistol. Unlike its predecessor, the 92 / M9 series, the grip is surprisingly slender, and that makes the whole pistol feel the same way. In fact, the grip is night and day different than the 92/M9 predecessors so it shouldn’t be a challenge for most any shooter. The APX is easy and soft to shoot, although you’ll find that the grip angle is a bit more raked so it’s closer to that of a Glock than a 1911. While the RDO variant is a bit more at $725, the standard APX retails for $575 – a fair price for what you get.