7 Things You Learn Shooting Lasers In the Dark Here’s what you most likely WON’T see when using a laser – unless the air is filled with smoke or dust.

USA –-(Ammoland.com)- We gun people have a terrible habit of arguing to the death over trivial theoretical debates like the whether using the wrong stance will cause painful bunions, adopting anything other than appendix carry

will disqualify you from the cool kids club, or choosing the wrong caliber will result in your immediate, spontaneous combustion.

One of my favorite topics of endless theoretical debate involves the use of lasers on defensive guns. In the interest of full disclosure, I like them. While they seemed like a good idea before I ever tried them, what cemented my support of the idea was using them to do a lot of shooting in dark conditions over the past several years. That’s when the light bulb really went off, and I saw, through trial and error, the value. Over the years, I’ve heard all the theoretical arguments against them, so I thought it might be fun to talk about some of my learnings from actually using them in low light conditions. After all, The best way to deal with theoretical “gun arguments” is just go out and try stuff yourself.

1. Don’t forego use of a laser because it will “give away your position.”

When you use a laser in the dark, two things are visible: a small bright spot on the front of your gun and a dot on whatever surface it impacts. What’s NOT visible is a glowing beam that can be seen from the International Space Station. Unless your environment is filled with smoke or other airborne dust, there’s no visible beam. For that to happen, the laser needs to reflect on material in the air. Without that, the beam is invisible except at its origin and destination.

If you’re worried about your attacker “finding you” by seeing the red or green glowing spot on your gun, then you probably shouldn’t be pulling the trigger anyway. If it’s so dark that you can only be seen by that pinpoint of colored light, then how on earth can you possibly see what you’re shooting at? 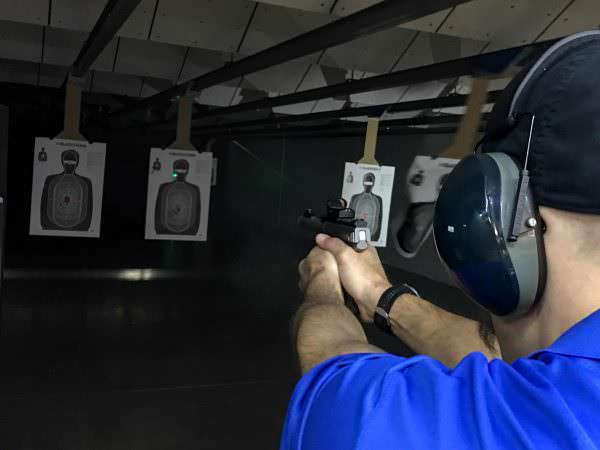 Here’s what you WILL see when using a laser – just a dot on the target.

Oh, and if you’re aiming a gun and laser at something, you’re already in a gunfight so you’re better off improving your odds of hitting whatever you’re aiming at quickly. Unless you’re in the business of offensive Ninja games and late night snatches of evil dudes from their beds, you don’t want to be playing a cat and mouse game where victors are determined by spotting laser beams anyway.

2. In the dark, lasers are faster, not slower.

At the very first Crimson Trace Midnight 3 Gun Invitational, most of the super-fast competitors used jury-rigged setups of lights with standard sights. Guess what virtually everyone switched to by the second event? That’s right, lasers. Why? Because in dark conditions, they’re quicker than a one-legged man in a butt-kicking competition. If you’re transitioning from target to target, the dot is on your new target well before you realign the standard sights. You don’t need to wait to shoot until the gun is aligned in a traditional shooting position in front of your eyes. You also eliminate the delay stemming from the need to transition your focus from the newly found target back to the sights.

3. The ability to shoot from non-traditional positions is a big deal.

On a related note to the previous point, the ability to shoot without bringing the gun up to a perfect eye-level shooting position is a big deal. Not only does it allow for faster shooting in general, but it also helps you get off a shot faster when you find a new target. Oh, and if you’re searching for a target, it’s difficult and distracting to have the gun, with a perfect iron sight picture, right in front of your face, directly blocking your field of view.

People hate on lasers because they think it’s some sort of crutch for iron sights. I completely disagree. Lasers

add capability, not replace it. In daylight conditions, a laser doesn’t help you much. In fact, it may very well slow you down as the dot is not nearly as visible as it is in low-light conditions. I have lasers on all my carry guns, yet never even try to find the laser dot when shooting in daylight conditions. In low light, you can’t help but see that dot on the target. I’ve found that there is very little if any, conscious thought required to choose between iron sights and lasers in light and dark conditions. It’s just a natural transition.

5. You can see regular iron sights perfectly well when using a weapon-mounted light.

If you stick a light on the end of your handgun, say something like a Streamlight TLR

-some hundred, or Crimson Trace Lightguard

, you’ll be able to see your iron sights pretty darn well in pitch black conditions. Even though the lamp lens is in front of both front and rear sight, the ambient light splash from whatever is in front of you will make your regular iron sights stand out like a pro-Donald Trump editorial over at Salon.com.

6. Muzzle flash at night is a big deal… not.

I don’t know how many times I’ve heard or read that the muzzle flash from a .357 Magnum or any other kiloton caliber hand cannon will blind you if you shoot in the dark. Well, I’ve seen plenty of muzzle flash in dark outdoor conditions, dark indoor conditions, and even in the bowels of a Kentucky cave where dark is measured on a whole new spectrum on anti-light, and I’m still waiting on my first temporary blindness as a result of muzzle flash. I’ve shot AR-15s, all major calibers, pistols and rifles using night vision goggles, and even ported pistols. Sure, if you concentrate, you can see the muzzle flash, but never has it overwhelmed my vision to the point of causing ill effect. 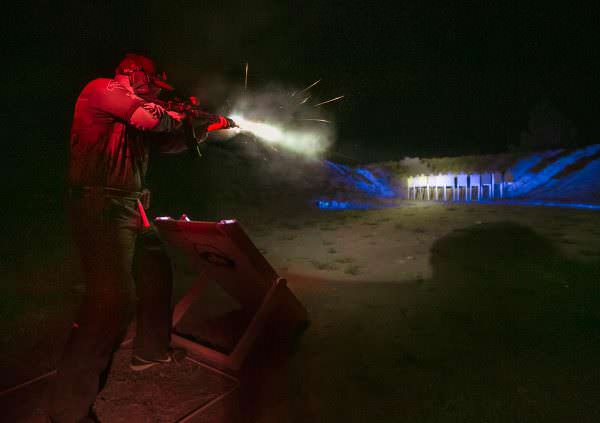 Muzzle flash is always there, but it’s never yet interfered with my ability to see the target on a follow up shot.

Perhaps if you are in the pitch dark, with no ambient light, and you allow your eyes a half-hour or so to adjust before firing a shot, then maybe you’ll see some spots and have visual disorientation. Or maybe not. Either way, however, I have to ask, in what circumstance are you shooting a gun at something you can’t even see? The second there’s enough light to identify a target, you’ve got light, and light from muzzle flash isn’t going to be the thing that ruins your party.

7. It’s hard to lumen yourself to death.

A lot of folks argue about the dangers of having too much light, so much so that the reflection will bounce back off walls and blind you rather than the dude breaking into your house.

OK, if your day job is sneaking into Hindu Kush mud huts occupied by bad guys with well-used Russian rifles, you may have some very specific requirements for weapon lights, visible or not so visible. Other than that, more light rather than less has always been a good thing in my book. I guess there’s a light out there with enough lumens to blind you from the reflection off walls or whatever, but I haven’t found it yet. Besides, it would probably melt paint anyway. 50, 100, 150, 300, or 500 lumens – they’re all fine inside of my home when lights are completely out. Perhaps if you lined it up directly with your bathroom mirror to bounce right back into your eye…

So those are a few things that I’ve learned shooting in the dark. How about you?

One more thing, if you haven’t yet taken the plunge into the light and laser world, here are a few proven ones to check out first:

: Laser only, these either replace or ride on top of the grips on your handgun or revolver. The big benefit is that you won’t need a special holster to use them.

Crimson Trace LinQ: Want to gear up your AR-15? Check out this wireless setup. The pistol grip controls a light and laser module up front.

: This is a light only solution perfect for AR-15s or anything with a rail. The rubber mount just “snaps on” the the rail wherever you like. Light, low-profile, and plenty bright.

Crimson Trace Laserguard Pro: Brand new on the market, this light and laser combo is made specifically for compact guns like the Glock 42/43, Springfield Armory XD-S, and Smith & Wesson M&P Shield.

There are far too many variants to list them all here, but these will get you started.