5 Great Pistols for Suppressor Use I don’t want to jinx the mojo on this, but it looks as though silencers may come off the “Mother, may I?” list before email servers actually fly out of Hillary’s butt.

Introduced by Rep. Matt Salmon (R-AZ) back in October 2015, the Hearing Protection Act aims (see what I did there?) to remove suppressors from the onerous requirements of the National Firearms Act. It’s perfectly legal for anyone legally eligible to buy a gun to acquire a suppressor in 41 of President Stompy Feet’s 57 states. The only gotcha is that you have to do things like send Uncle Spendy $200, fill out lotsa paperwork, ask extra special permission, and submit a left butt cheek print to the Bureau of Alcohol, Tobacco, Firearms and Explosives. The Hearing Protection Act would basically make the process of buying a suppressor identical to that for buying the gun it goes on.

Of course, not everyone agrees this is a good idea. Never one to miss out on an opportunity to have a hysterical meltdown, Violence Policy Center Legislative Director Kristen Rand said, “Even though silencers are currently difficult for private citizens to obtain, they have already been used in horrific crimes.” Well, so have spatulas, toilet tank lids, and a jar or gherkin pickles.

Oh, and by the way, according to an NSSF report, “ between 1995 and 2005, the researcher found 153 federal criminal cases involving suppressors, only 15 of which involved the actual use of the suppressor in the commission of a crime.”

OK, enough on the politics. Suppressors rock. They provide essential protection against hearing damage, make ranges more friendly to neighbors, and can actually make you shoot better. While they don’t make guns more accurate, removal of that distracting conflagration in front of your face allows you to focus, undistracted, on proper shooting fundamentals. Oh, and they’re more fun than running your own Guppy Mill for fun, profit, and unlimited seafood snacks.

Since we’re on the verge of easily accessible silencers for all, I thought it might be appropriate to whip up a list of five pistols that are sooper-dooper for suppressor use. Here goes…

There are a number of rimfire pistols that are really great for suppressor use including the new Smith & Wesson Victory, lotsa different Ruger models and pretty much anything jazzed up by the folks at Tactical Innovations. I choose the Smith M&P22 Compact for this list because of its perfect balance with small and uber-light .22LR suppressors. The adjustable sights are just high enough to clear most (if not all) standard sized .22 cans and the rail up front allows you to attach a light or laser. That makes this combo a supreme setup for nocturnal rodent elimination. The short barrel keeps even most (not all) high velocity .22LR loads below the speed of sound, so it’s quiet. The barrel comes threaded, but since the threading is internal to the slide, you’ll need an adapter to mount your silencer. 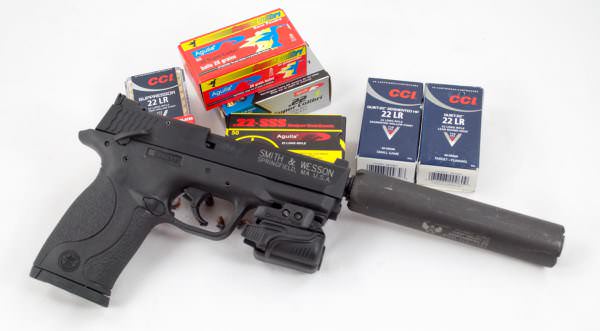 I bought one of these after reviewing it a back and it’s really grown on me. As a .45, much of the standard ammo is already subsonic, so it’s quiet without making an extra effort in ammo selection. For a gun that packs 15+1 rounds of .45 ACP, it’s not as big as you might expect. The factory sights are not only Tritium-powered, but they’re also tall enough to see over every suppressor I’ve put on it so far, even the larger multi-caliber models. With all these can-friendly features, you know the barrel is threaded and ready to go. This gun rocks for silent running. I keep a SilencerCo Osprey 45 on mine. It not only looks cool, but the more rectangular shape of the suppressor keeps the width of the overall package about the same as the slide. Oh, I almost forgot to mention the niftiest suppressor-friendly feature. The FNX Tactical comes with an optics ready frame so you can stick something like a Trijicon RMR up top. The dot clears the suppressor body so it makes a great suppressor-friendly sighting option. 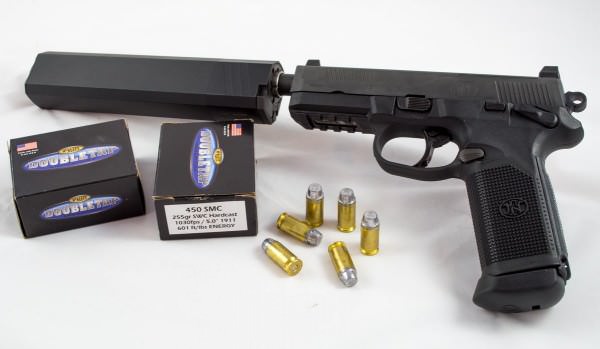 The FNX 45 Tactical is a perfect platform for suppressed use.

Relatively new on the suppressor ready block are the 9mm and .45 ACP Springfield Armory XDM models. Springfield builds both models from the 4.5” XDM frame, then adds some tweaks for suppression. The 5.28-inch barrels are pre-threaded and suppressor height sights are standard. The 9mm packs 19+1 capacity while the .45 model fits 13+1. Try American Eagle’s new 9mm and .45 ACP Suppressor ammo in these and you’ll be happy. It’s not only subsonic but makes use of lower “gunk” powders so you have less to clean up after shooting silently. The 9mm also loves most 147-grain loads as they tend to be subsonic too. 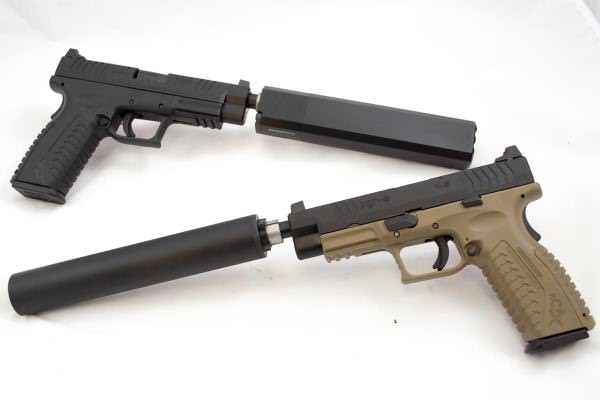 Glock G-Pretty Much Any Model

Even though you have to buy your own threaded barrel to swap with the factory one, Glock still makes the list. Here’s why. Replacement threaded barrels for Glock models like the G26, G19, G17 and a host of others are very reasonably priced. While other threaded barrels can easily run into the two c-note range, Glock threaded barrels from suppliers like Lone Wolf are usually just over a hundred bucks. Also, everyone and their brother makes aftermarket sights to fit Glock pistols. As a result, it’s easy to find suppressor height sights. On a whim, I suppressed the little Glock 26 and that turned out to be a great combination.

Before assembling this combo, I thought it might be dorky, but the Glock 26 made a great suppressor host.

If you haven’t noticed, Sig Sauer is going nuts with new models of everything from pistols to rifles to optics to suppressors. Now that they make their own pistol and rifle silencers, you knew that off the shelf models of their most popular pistols couldn’t be far behind. While Sig has offered P226, P229, P320 and other models with threaded barrels for a while, you had to order suppressor sights separately. New for 2016, you can order P225s, P226s, P227s, P230s and others ready to go with sights and threaded barrels. Many of the models with factory suppressor sights are brand new, so available may be more “soonish” rather than “nowish.” Also, the Sig folks showed us a slew of optics ready models that will make excellent suppressor hosts, but those will probably hit the streets later in the year. 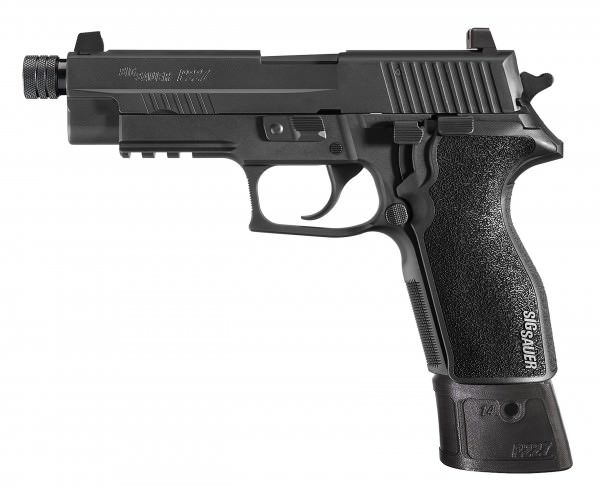 The original Beretta 92FS and M9 models are actually great hosts for suppressor use. Back in the day before silencer boosters made most any gun reliable, the straight back recoil action proved itself compatible with suppressed function. However, the standard sights were too low and you had to buy and extra barrel. The new M9A3 model sports a threaded barrel right off the bat.

Even the original Beretta 92 made an excellent suppressor platform although you had to thread the existing barrel or buy a new one.

Like the Beretta, new Smith & Wesson M&P Threaded Kit models come with threaded barrels ready to go in both 9mm and .45 ACP. I’ve been testing the .45 ACP version for a few months and it rocks. Easy to shoot and reliable, the only thing missing is suppressor-friendly sights. You can get them from Dawson Precision, but it would be better to have them installed in the factory model.

Oh, since you’re here, how about taking two minutes to add your support to passage of the Hearing Protection Act? Do it for the children, OK?

And more more thing, if you now feel the need for quiet, get in touch with the folks at Silencer Shop. They’ll help you navigate the process of getting your very own slice of silence.