A Pair of Long-Range AR Rifles from Palmetto State Armory

In Long-Range AR Rifle Options: 6.5mm Creedmoor and .224 Valkyrie we talked about two great long-range cartridges for use in the AR-15 and AR-10 platforms. That was the theoretical part. Now it’s time to take a real-world look at both.

What better way to do that than with a pair of matching rifles? The Palmetto State Armory .224 Valkyrie is built on the company’s AR-15 lower receiver platform while the Palmetto State Armory PA-65 is a 6.5mm Creedmoor offering on their AR-10 chassis. Most everything else on the two rifles shares the same material specs. Of course, the bolt carrier group, magazines, and upper receivers are sized for their individual AR-10 and AR-15 platforms.

Both rifles use 20-inch barrel and rifle-length gas systems, both of which are entirely appropriate for their intended longer-range use. The barrels are a heavy profile and made of 416R Stainless Steel. Both measure 0.74 inches in diameter on the outside, so the only difference is the hole. The .224 Valkyrie features a 1:7-inch twist rate while the 6.5mm Creedmoor uses 1:8. Both are capped with an A2-style flash hider, but those came off almost before I got the rifles out of their respective boxes because these rifles just begged for suppressors. On the Valkyrie, I used a SilencerCo Saker 556 and on the Creedmoor a SilencerCo Specwar 762. There, much better. 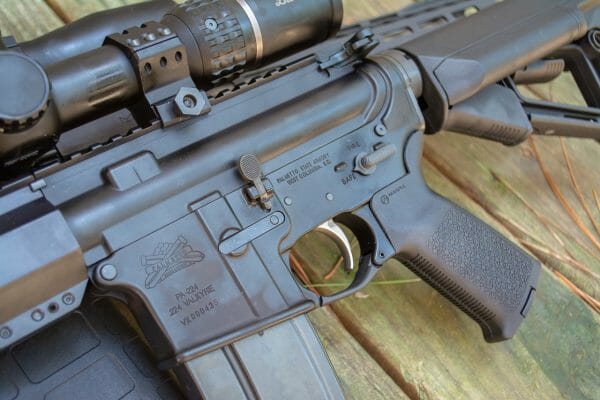 Both rifles included an upgraded trigger group. Pull weight was four pounds or less and the tw-stage action was grit-free and crisp.

The triggers on both rifles are two-stage Nickel Boron assemblies branded by PSA. The first thing I did was get out my trigger scale to check out the actual weights. Sure enough, the first-stage take-up for both triggers matched the factory spec of 1.75 pounds. Going through the second stage to the break required 3.75 pounds on the Valkyrie rifle and precisely four pounds on the 6.5mm Creedmoor. This trigger kit is offered separately by PSA for about a hundred bucks, so it’s a nice inclusion in the base rifles. 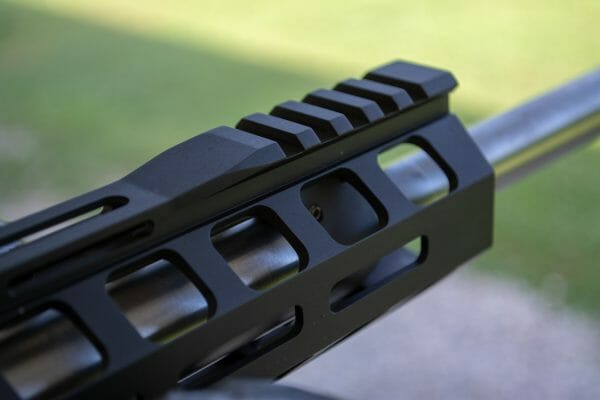 The hand guards use short rail segments front and back with a smooth surface in between. M-LOK is everywhere else.

The upper receivers both use the Palmetto State Armory 15-inch M-LOK handguards to surround the free-floated barrel. I really like these. They’re simple and offer M-LOK slots all the way down at the three, six, and nine o’clock positions. The top has a three-inch rail segment that extends the receiver rail and a 2 ¼-inch segment up front for a backup iron sight. In between, there is no rail, and the profile scoops down. Not only does that save some weight and provide a better grip surface, but it also allowed me to mount a scope with a big 50mm objective lens without resorting to tall rings.

The Valkyrie rifle comes with a 30-round 6.8 SPC magazine as that’s the correct type for this caliber. The PA-65 ships with a 20-round 7.62x51PMAG. The furniture is all upgraded over the standard stuff with black Magpul MOE pistol grips and black Magpul CRT six-position adjustable stocks. The CTR is the model with dual water-resistant battery/parts tubes alongside the comb, a rubber butt pad, and a locking mechanism to prevent inadvertent slippage of your length of pull preference. 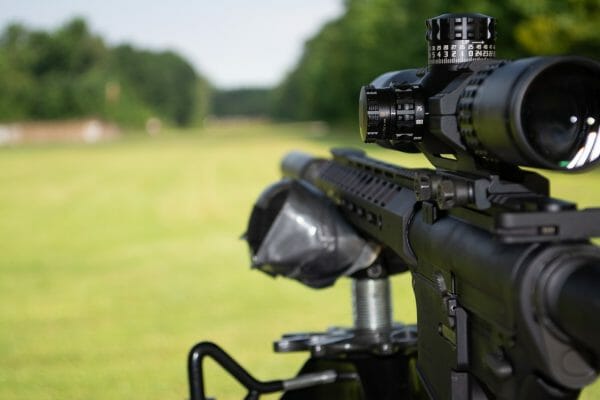 Step one for testing these two rifles at my local 800-yard range was getting good velocity readings. I fired multiple rounds of each ammo type through each rifle to get an average reading and came up with the following. 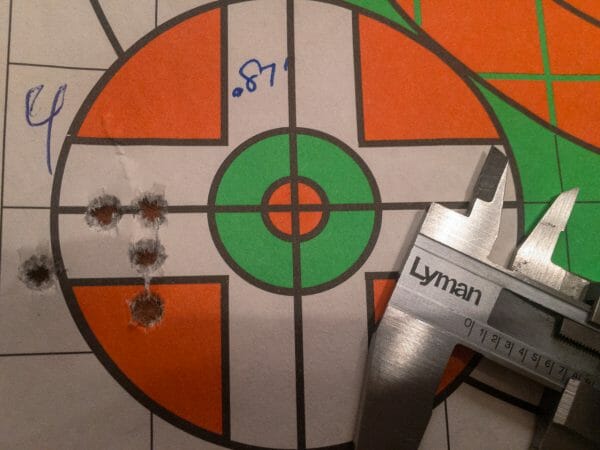 Next up was zeroing at 100 yards and getting a feel for the accuracy of each load. I fired five-shot groups and measured the widest diameter, center to center. I should note that I did follow the factory’s recommended break-in procedure with both rifles on a previous outing. That calls for cleaning between each of the first five shots, then after each subsequent five shots for the next 50. That was tedious, but at least I got to shoot.

With a good zero, current weather conditions from my Kestrel meter and Ballistics AE app, and actual velocity, I could now start doing the math to figure out trajectory adjustments for steel targets at 300, 600, and 800 yards down range. Since I tested multiple loads for the 6.5mm Creedmoor, I chose the top performer at 100 yards for the longer-range shooting. Interestingly that turned out to be the Hornady Precision Hunter ELD-X 143-grain load.

With a 100-yard zero, there’s not much adjustment required for either rifle to shoot 300-yard targets. The 6.5mm Creedmoor had a predicted drop of 12.61 inches and a scope adjustment of 4.01 minutes of angle. No problem! That’s a chip shot. My actual group landed maybe one-inch high at 300-yards when I adjusted for an even four minutes of angle. If I was really motivated to achieve perfection, I could have dropped back one click, or a quarter of a minute, on the Burris XTR scope and I would have been about dead on because a minute of angle is 3.141 inches at that distance, so a quarter MOA (one click) adjustment would lower the group by about .78 inches. At the same 300-yard distance, the math predicted a 15.29-inch drop and 4.87-inch scope adjustment. I dialed it to 4 ¾, called it close enough, and the impacts were dead on target.

Moving out to 600 yards, things got more interesting. The 6.5mm Creedmoor has a projected drop of 89.03 inches and scope adjustment of 14.17 minutes of angle. The actual turned out to be pretty close. A 14.5 minute of angle scope adjustment was right on target. The Valkyrie was supposed to drop 89.7 inches and require 14.3 minutes of angle adjustment. In reality, I had to dial in 15.5 minutes to get right on target. That’s not a reflection on the rifle or ammo, but more likely the calibration of the scope at higher adjustment settings. If 15.5 minutes of clicks don’t exactly equal 15.5 minutes of adjustment, you’ll be off a bit. That’s why it’s so important to test your loads at various distances rather than assuming the math will be right.

At 800-yards the Valkyrie should drop 194.6 inches and require 23.2 MOA of adjustment. My actual adjustment to get perfect hits was 24 minutes even. The 6.5mm Creedmoor almost exactly matches the Valkyrie at this range with a drop of 190.73 inches which translates to 22.77 minutes of angle. 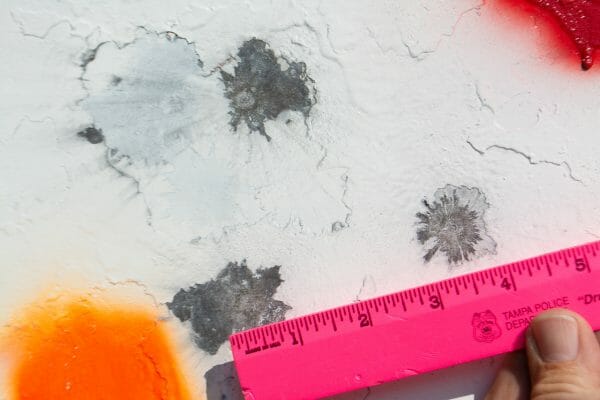 600-yard groups with both rifles were impressive and all less than six inches.

One interesting thing to note was that group sizes held and maybe even shrank proportionally at the longer distances. There was little wind the day I was shooting, maybe two to four miles per hour from the eleven o’clock position so I didn’t have to adjust for wind drift. What I noticed was that the 600-yard groups were mostly in the 4.5-inch range for both types of ammo. None exceed six inches as I would have expected given the 100-yard results.

Here’s the bottom line. Solid long-range performance doesn’t require expensive bolt-action competition rifles. You can get good results into the four-digit yardage range with standard AR-15 and AR-10 platforms. As for affordability, one of the reasons we chose this match set of Palmetto State Armory rifles is the price point. As I write this, both rifles currently sell for just $699.99.