A Retro History of the Colt Commando XM177 Carbine

Here’s a brand new version of the famous Colt Commando – the Brownells XM177E2.

The most challenging part of the XM177 history is the profusion of names and nicknames for the actual rifle it represents.

They’re all correct, at least in part.

Back in the 1960s and early 1970s, Colt was the bomb in terms of manufacturing AR-type rifles. Wanting to get “Colt” back in the mix with the “AR” name, the company adopted a family approach to the rifle under the CAR-15 brand. No, CAR didn’t stand for “Cannons And Rockets,” “Cosmic Armageddon Rifle,” or even “Colt Armalite.” It did stand for Colt Automatic Rifle, which was peachy since the company was selling them to the military so the “automatic” part was just fine and no one threw a hissy.

So, the CAR-15 was a family of AR-15 “like” guns including a rifle, heavier rifles, heavier belt-fed machine guns, smaller carbines, a submachine gun, and even a survival rifle designed for pilots.

The short version of the story behind the Colt Commando is this. In the mid-60s as the Vietnam war was heating up, the military wanted something more compact than the M16 rifle for close quarters, special operations-type use. That was the original plan for that CAR-15 SMG we mentioned a minute ago. Just to be clear, submachine guns are generally considered to be pistol-caliber firearms, but nomenclature rule-breakers decided to call this one an SMG anyway to position it in the category of small and portable guns.

With its uber short 10-inch barrel in the original configuration, it was a handful, not regarding recoil but rather the size of the fireball it launched out of the muzzle. Reports of three-foot diameter balls of flame made it a bit dangerous to use, especially at night as it would illuminate an entire zip code with each shot. Nothing says “Here we are!” like fully automatic solar flares. To mitigate that problem, Colt added a moderator to try to tame the muzzle meteors. A couple of iterations of increasingly longer muzzle devices led to something like the one that was folded into the production of the XM177 later. Just to be clear, the CAR-15 SMG wasn’t really an official production rifle. Some dozens of them were assembled using existing parts as a stopgap measure for a compact carbine platform.

This carbine is a Colt Model 610 with a forward assist. Photo: imfdb.org.

Moving forward to create a workable compact carbine for volume production, the Colt team developed the Model 609 and 610 rifles which made improvements on the CAR-15 SMG platform. Those enhancements included development of a two-piece front hand guard system to replace that iconic triangular one. The round hand guards were not only more durable but better suited to production and field repairs. Being round, both halves of the assembly were identical, so only one unique part had to be managed. The 609 and 610 models also formalized the collapsible stock design. Like the ones we know and love today, a pressure lever could change the length of pull instantly. Unlike those on modern AR-15 rifles, the original had only two positions: open and closed.

With the development of the 609 and 610 models, the Army gave this carbine the designation of XM177 with the “X” part indicating “experimental.” The original XM177 was based on the Model 610 which had no forward assist. As it’s considered bad form and unoriginal for different branches of the military to agree on anything, the Air Force also adopted the same carbine but called it the GAU-5/A Submachine Gun. Because confusion benefits everyone.

Just to add more confusion, when the Army started to order these models, they went with the Model 609 variant (which included a forward assist.) Being different in features, this needed a new name, and that became the XM177E1. Clear as mud so far? Good, then hold on to your shorts, it gets more confusing. 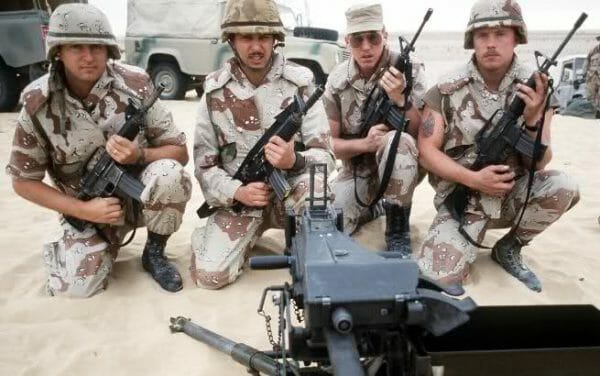 Some XM177s saw use in Desert Shield and Desert Storm. The two on the left are XM177s.

In the cycle of continuous product improvements, someone decided that lengthening the barrel from 10 to 11.5 inches would be a good thing and a change likely to reduce the size of muzzle flash from outrageously ginormous to simply epic. New specifications meant new model numbers, so the Colt folks named these carbines the Model 629 (forward assist) and Model 649 (no forward assist.) New Colt model numbers meant that the Army had to issue a new name too, so these became the XM177E2 series. Oh, and of course the Air Force did likewise, adopting the GAU-5A/A model which apparently did not have a forward assist but rather a confusing name with lots of vowels.

So, if you’re still conscious after digesting that, here’s the summary on the Colt Commando. There is no definitive configuration of a Colt Commando rifle. It’s kind of a loose term to describe these very similar carbines. Some had 10-inch barrels. Others had 11.5-inch barrels. Some had bayonet lugs while shorter barrel models did not. They may or may not have a forward assist feature. The important stuff like short configuration, compact size, round hand guards, and collapsible stock seem to be consistent throughout the family.

Produced until about 1970, Colt Commandos served in various special forces groups and even with the British SAS, even making an appearance in the Falklands War. Replicas of XM177s have also been popular in the movies and television. You already know they appeared in the movie Desperado, because, well, what didn’t? Also keep an eye out in classics like Uncommon Valor, Lethal Weapon, The Running Man, The Fugitive, The Rock, Black Hawk Down, Die Another Day, and even Hot Shots! Part Deux.

Here’s the best part. If you want a piece of Colt Commando history, as in your very own, you can enter to win the new Brownells Retro XM177E2 Carbine here.