5 Cool Guns And Gear Products From The NRA Annual Meeting

Springfield Armory’s new XD-E is a departure from the company’s striker-fired pistol line-up.

The National Rifle Association Annual Meeting is a heck of a lot more than just meetings. Yes, the business of the NRA gets done, and there are plenty of speeches by industry figures, politicians, and others, but there’s also one of the world’s biggest gun and gear exhibits.

This year, over 800 companies filled 15 acres of exhibit hall space to show the latest and greatest guns, gear, and ammunition to 81,836 attendees. That makes the recent event held at the Atlanta, Georgia World Congress Center the second largest NRA Annual Meeting ever. How someone counted all those folks will remain one of the mysteries of the universe, but I can attest to the fact that there were 194 boatloads of people shuffling the aisles and more gear than one could ever dream of buying.

After wandering the thousands of yards of exhibit aisles, I picked out this short list of new and interesting stuff.

For 97% of forever, the folks at Springfield Armory have made two types of handguns: single-action 1911s and striker-fired XD pistols of all sizes and calibers. Now the company has submitted a new entry to the hammer-fired, double-action / single-action pistol market. If you’ve seen the Springfield Armory XD-S, then you have a good handle on the size and profile of the new XD-E. While the XD-E is slightly bigger, it’s a unique entry into the concealed carry market.

Why? The company is aiming (see what I did there?) this pistol squarely at a couple of segments of handgun buyers. First, there are plenty of folks who like the peace of mind of a longer and heavier double-action trigger pull for a personal defense pistol. There are also folks who have no desire to carry a gun without a manual safety. The new XD-E has both, and those features are packed into a single stack gun that measures just over 0.9 inches thick. The low-profile magazine packs 8+1 while the included extended mag offers 9+1 rounds of 9mm. Oh, one more segment. The new patented hammer design makes the slide really, really easy to rack. Folks who have difficulty operating compact semi-automatic pistols for that reason may want to check this out.

The safety lever also serves as a de-cocker, allowing you to lower the hammer safely. It also allows you to carry the XD-E cocked and locked, ready to go in single-action mode if you like. With fiber optic front and combat rear sights, it’s as easy to aim as it is comfortable to shoot. Like the XD-S, it’s got enough mass to tame 9mm recoil. I’ve shot hundreds and hundreds of rounds through one and it works like a champ.

At the pre-NRA American Suppressor Association range event, I had the opportunity to try two nifty new AR-15 upper receivers. The Gemtech Integra is an integrally suppressed upper for AR-15 rifles, and it’s currently available in two calibers: 5.56 and 300 Blackout. As a single unit, you currently need only one permission slip from the BATFE to acquire it, at least until the Hearing Protection Act passes. Side note: bug your congress critters about that now. While the barrel is only about 10 inches long (10 even for the Blackout model and 10.5 inches for the 5.56mm), the suppressor outer tube is permanently attached, so it meets the overall barrel length requirement of 16 inches and avoids special registration as a short barrel rifle. 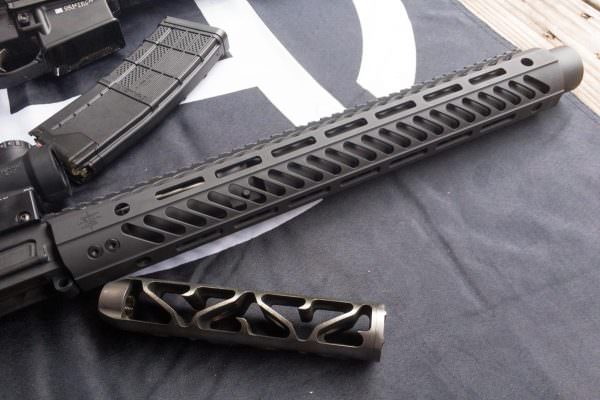 The barrel and outer tube are fixed to meet the 16-inch length requirement, but the G-Core baffle comes out for cleaning.

What’s interesting about this is that the suppressor core unscrews from the muzzle and comes out as a single piece, similar to other Gemtech G-Core designs. The company also teamed up with NEMO Arms to implement a patented gas block that helps to expel dirty gas that tends to make its way back to the shooter in most standard AR suppressor configurations. I shot both calibers and experienced none of the typical suppressor facial blast. MSRP is $1,999, but you can get one from the folks at Silencer Shop for about $150 less than that.

These two nifty devices are going to turn the thermal imaging market inside out. The LTO Tracker is a monocular, hand-held device that detects thermal patterns up to 600 yards out. The image quality is stunning considering the MSRP of $909. While not trivial that’s inexpensive as far as thermal imaging devices go. It’s got a 6x zoom and six different viewing palettes that let you choose hot spot highlight views, black and white, green and more. 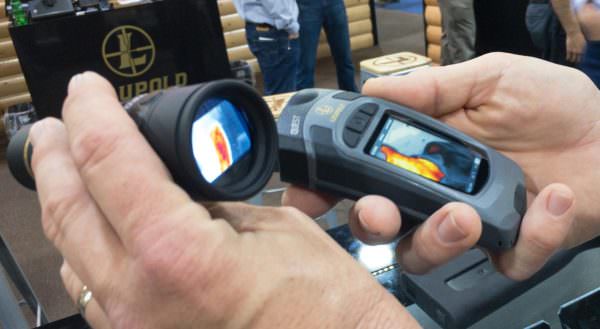 The Leupold LTO Tracker (left) has more range and better resolution but the Quest also packs a flashlight.

The even newer Quest is a handheld unit that reminds me of those old-school Star Trek Communicators. This one is designed to be held in hand down low so you can see where you’re going. The image shows on a large screen. It’s also got an integrated flashlight, which is part of the reason you don’t hold this one up to the eye like a typical monocular. Expect to see it this summer.

OK, so I’m putting two suppressors on this short list. Maybe I’m optimistic about finally ending the onerous regulations that make it hard to buy a freaking muffler. Anyway, this one is cool. Here’s why. It’s modular so you can use it in a short or long configuration. This makes particular sense for rimfire use as you really don’t need a full-length suppressor on the end of a .22 rifle owing to the lower pressure that far down the barrel. On a pistol, you generally do want that extra suppressor volume. Besides, if you want super quiet more than portability on a rifle, there’s no reason you can’t use the full-length configuration, it’s just nice to have the option. 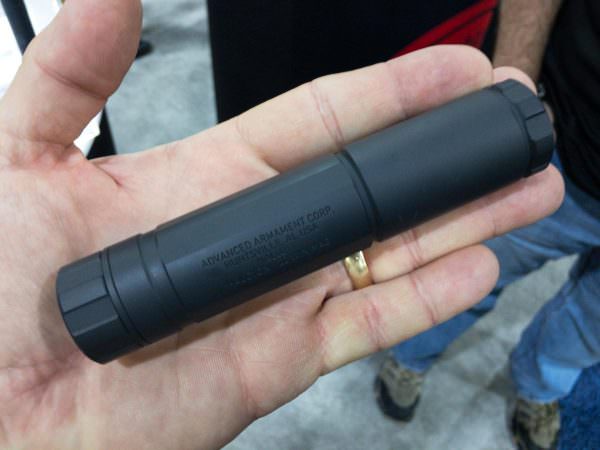 The AAC Halcyon is about the same size as any other rimfire suppressor, but breaks down into a compact configuration too.

The full-length configuration is 5.28 inches long and weighs 6.1 ounces. The short configuration (less three baffles) is just 3.41 inches long and weighs 4.5 ounces. Use of Titanium where it counts, and aluminum for weight savings makes it strong enough for full-auto use. It’s also covered in Cerakote to help you avoid IR detection if you like to play Ninja games. I’m totally getting one.

OK, maybe I’m easily amused, but my better half ran across this one when I was drooling over some obscure shooting accessory. Think reusable glow sticks. Now, take that technology and package it into everything from tubes (like glowsticks) to big shrink-wrapped flat mats that weigh next to nothing. The picture here shows both. The neat thing about the shrink wrap version is that it is thin, can be rolled up, and provides enough soft illumination to light up a tent for the whole night. 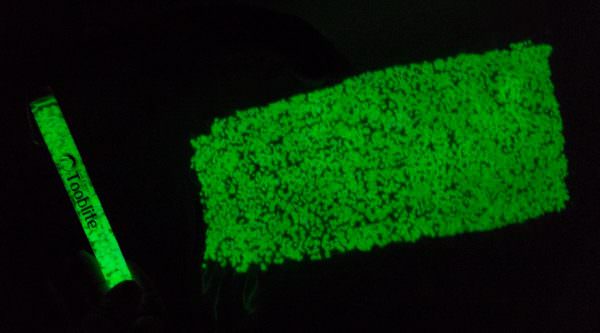 The Tooblite (left) and UV Mat (right) both use the same magic crystals to provide free illumination.

The magic crystal stuff inside glows for up to ten hours but gradually diminishes in intensity during that time. If you want to make your flashlight batteries last a whole lot longer, just hit the Tooblites or mats with a flashlight for a few seconds, then turn the flashlight back off. That will brighten them back up. Handy stuff.