The “Not” Normal State of the Gun Industry Are shooting industry sales figures about to fall off the charts?

Thanks in part to our 24-hour news cycle, there’s a lot of concern, debate, and hand-wringing about the state of shooting industry. Listening to the pundits, one might think that any minute now, MSNBC will report that the collective assets of Ruger, Smith & Wesson, and Sig Sauer have been purchased by the Possum Kingdom, South Carolina Dairy Queen franchisee.

Are gun sales slowing? Maybe, but I doubt it.

than ammunition this year? Probably not.

Literally, as I was turning this article in, I received a press release from Smith & Wesson announcing rebates on Shields, Bodyguards, and SD models. Has the company also decided to give free guns to everyone who loses a tooth since no one is buying guns anymore?

Announcements by individual companies don’t usually indicate much of anything about the state of an industry. Colt and Remington both have had their share of troubles for years now. Does a 2017 layoff announcement reflect a declining industry or just expected corporate struggles?

If we’re to engage in an intellectually honest discussion about whether the shooting industry is slipping, we need to pay careful attention to the definition of “normal.”

For the past eight years, we’ve had a never-ending drip of “not normal

.” Think about it. Every time President Obama uttered any combination of syllables that rhymed with “fun” within 45 feet of a live microphone, droves of people flocked to their local gun stores to stock up on any and everything. When even the Billy Mays Flex-Seal

holsters are sold out, that’s not normal market conditions. Evaluating gun sales trends during “not normal” conditions is no different than measuring average battery and bottled water sales trends in the 72 hours leading up to a hurricane landfall.

To figure out what is normal, we can look at annual gun sales across the entire industry. Numbers compiled by the ATF portray a pretty good glimpse of what’s really going on at the market-wide level, but those figures aren’t exactly timely. For example, as of this writing, we know that we’ve been on a pretty steady uphill climb since 2001, but numbers are only published through the calendar year 2014. Companies have until April 1 of the following year to submit data to the ATF, then the ATF spends another year making PowerPoint slides, and only then do we see the data. You can find the latest report here. I would encourage you to take a look, it’s pretty interesting stuff and not too long and convoluted as far as federal government publications go.

Fortunately, there are more timely business indicators available. The FBI reports National Instant Background Checks (NICS) on a monthly basis. Each NICS check doesn’t represent a gun sale, however. Sometimes NICS checks result in a denial of a sale. Sometimes NICS checks are done for other reasons like general background checks for concealed carry permits and such. And, in most states, no NICS checks are required for private transactions between individuals in the same state. Other states require buyers to fill out a form 4473, but if they have a concealed carry permit, then there is no phone call instigating an NICS check. So, NICS checks don’t directly represent sales.

With that in mind, let’s take a look at NICS history over the past ten years or so. Here’s the raw data from the FBI and here’s a link. 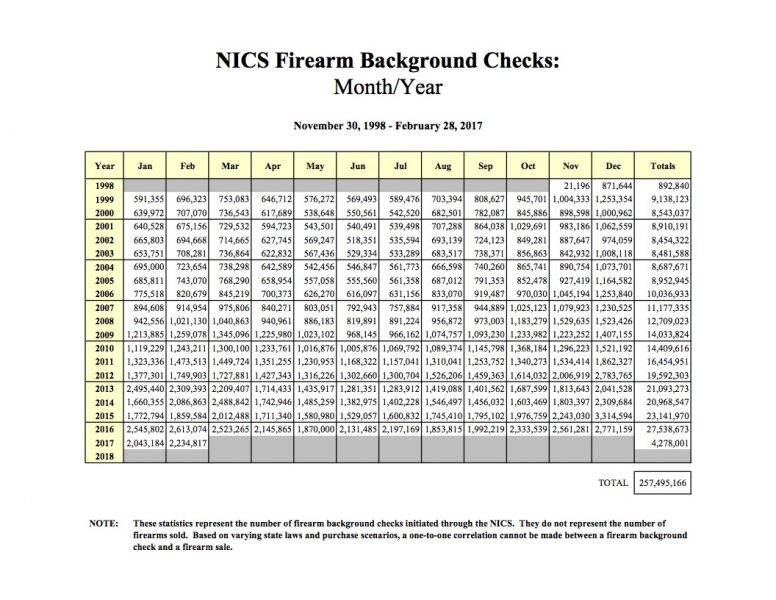 FBI NICS background checks by month. OK, so this is a lot of numbers. Read on and check out the summary charts below.

That’s a lot to digest, right? When I’m overwhelmed by detail, I like to look at pictures. Here are graphical representations of monthly NICS checks for the last four months. I’ve included the complete history of the same month over time so you can easily see the NICS trends. As most of the commentary centers around the “not Hillary

” effect on gun sales, let’s keep this simple and just look at the months since the election. 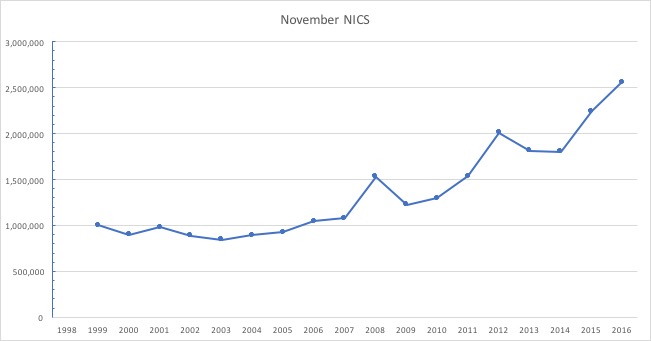 If you judge the health of the shooting industry by the volume of background checks, the trend looks pretty good.

I included November as the election results were known early in the month. As you can see, NICS volume, and presumably gun sales, have grown steadily since about 2003, 2016 included. 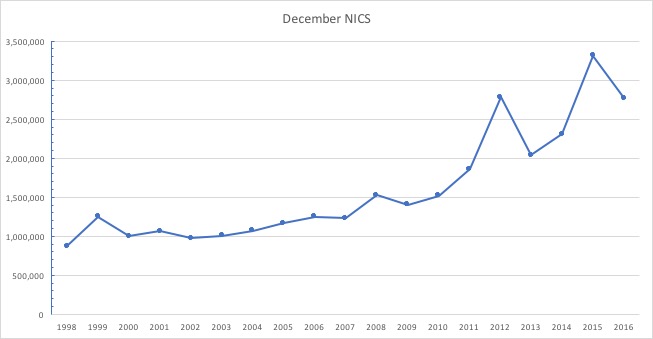 Again, all the Decembers show a steady upward trend with two “not very normal” months. December 2012 was huge because – you guessed it – President Obama just won his second term a few weeks prior. Fearing internment camps and electro-shock therapy for NRA members, people flocked to buy every available gun. December of 2015 was the biggest NICS month in the history of ever and by a huge margin – about a half a million. I’d call that another “not normal” month.

January shows two more “not normal” months – the whopper after the 2012 election and January 2016. January 2017 is still very much part of the long-term upward trend. 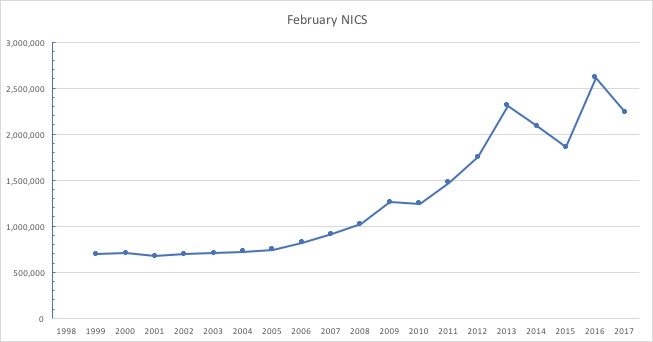 Our two “not normal” anomalies still linger in 2013 and 2016, but if you look, you’ll notice that February 2017 was the third biggest NICS month in the history of Februaries ever. Keep in mind that this is the exact time period when panic over the future of gun sales set in. If these were charts of my stock portfolio, I’d be a happy camper.

So what’s the deal? My theory on the recent sales slump panic is simple.

As many inside and outside of the gun industry expected a Hillary win last November, it seemed a pretty safe bet that we’d have yet another of those “not normal” batteries-for-hurricanes sales peaks beginning at exactly 12:01 a.m. November 9, 2016. Hey, corporate CEO’s get paid the big bucks because they have to make big decisions. If there’s a good chance that demand is about to explode to unprecedented levels, they’d be remiss if they didn’t start stuffing warehouses and channels with product. If they didn’t, not only would they miss out on huge revenue and profit opportunities, they’d lose customers who were frustrated at the lack of product on the shelves. The result of both would be lots of ticked-off shareholders anxious to deliver the Donald’s “you’re fired’ line.

So, simply put, lots of gun industry companies made the “safe bet” of a Hillary win and planned for a big buying rush. As we know, Hillary didn’t win, hence no big buying panic, so all that stuff is sitting on shelves and there is no need to expand business to “not normal” levels. All those big hiring and expansion plans to meet Madame President demand forecasts are now being shelved because consumer demand is simply normal, which in this industry seems to be steady and consistent growth. In the context of time and same month comparisons over the long haul, I don’t see the first thing that shows anything other than continued rational expansion.

The net-net? Sales being “normal” instead of “not normal” isn’t that big a deal. Yes, there will be hiring slowdowns and low prices to clear the shelves, but I have to wonder if most of that isn’t simply an adjustment to “normal” since “not normal” didn’t happen.

As far as I can see, “normal” is pretty darn good.