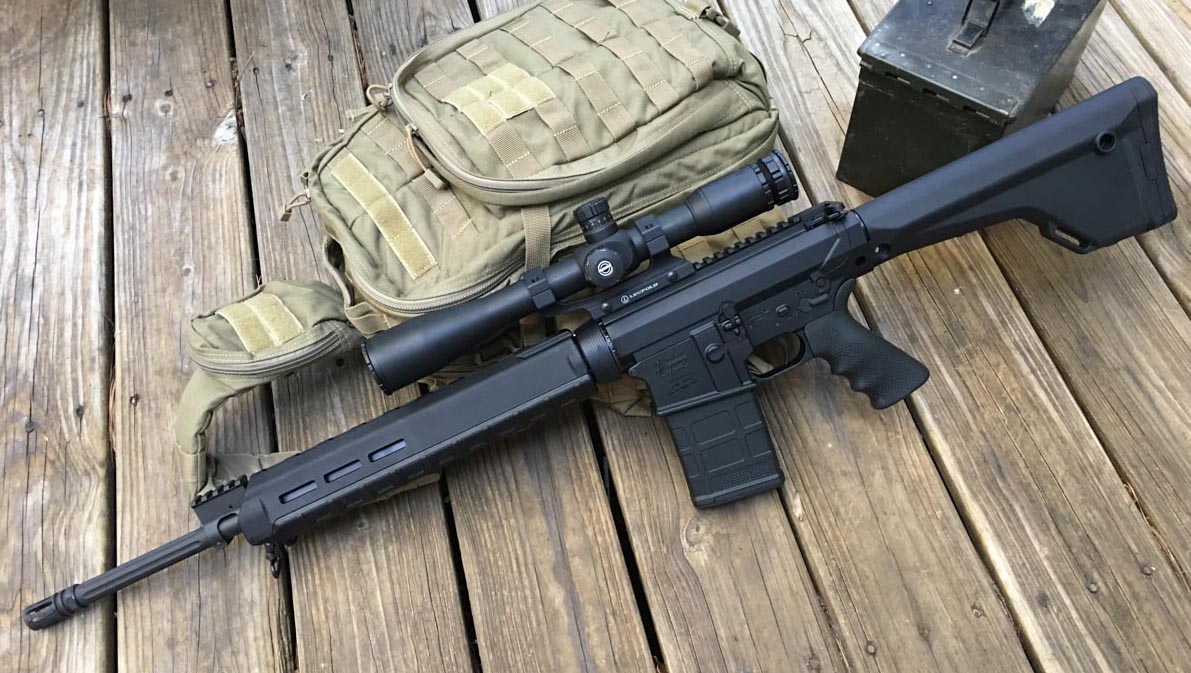 The Windham Weaponry R20FFTM-308 is an AR-10 type design with a fixed, rifle -length stock.

prone to hysterical reactions tend to place the AR-15 in the same death and destruction category as plutonium bombs, Zika Virus, and John Travolta’s singing in the movie Grease

, it’s really just the little brother of another popular rifle design – the AR-10.

How much littler? Ballistically speaking, you can compare the two as follows. The AR-10 fires the .308 Winchester cartridge while the AR-15 fires the .223 Remington (or 5.56 mm NATO) round. To provide an approximate comparison between the two, we need to look no further than my friend Andrew Chamberlain’s world famous Cartridge Comparison Guide

. If we look at kinetic energy, which can be loosely defined as the destructive power of a given cartridge, we find the .223 Remington delivers somewhere in the neighborhood of 1,280 foot-pounds of energy. That’s for an “average” 55-grain load moving at 3,240 feet per second. An “average” 150-grain .308 Winchester bullet, with a velocity of 2,850 fps, delivers 2,704 foot-pounds of energy at the muzzle – over twice as much!

This rifle is an optics ready flat top configuration.

(it causes damage but doesn’t necessarily move things), momentum indicates the ability to displace mass, so that measures ability to impact and penetrate. That same .223 ammo has 25.5 lbs-ft/sec at the muzzle while the .308 delivers 61.1 lbs-ft/sec – again over double.

So with that in mind, we’re looking at the Windham Weaponry R20FFTM-308. While there is no reliable industry standard for the AR-10 design as with the AR-15, that’s the pattern that this rifle follows. Just be aware that there is not necessarily complete parts interchangeability between AR-10 “type” rifles from different manufacturers. Also keep in mind that, due to the much larger cartridge size, key components like the lower receiver, bolt and carrier group, and magazines are all different than their AR-15 smaller siblings.

Just for scale, the Windham Weaponry rifle is shown here (top) with the Armalite M-15 we recently reviewed.

Windham Weaponry is a relatively new company – sort of. Founded by many of the folks behind the original Bushmaster company, Windham regenerated in 2011 after Remington moved the Bushmaster operation to New York. When his non-compete agreement with Remington ran out from the 2006 purchase by Remington, Bushmaster founder Richard Dyke gauged interest among former employees in the Windham, Maine area about the idea of rebuilding a new company. Interest was high, and the company was again producing rifles within months. The bottom line is that the Windham folks have been building rifles for a long time, just under a different name.

The R20FFTM is a fixed stock configuration rifle. Designed for optics, it arrives without iron sights, and that’s just fine with me. They’d only end up getting in the way of my scope mount anyway. If you want to configure primary or backup iron sights, the front Mil-std 1913 gas block rail is the same height as the receiver rail segment, so alignment is easy.You’ll notice plenty of Magpul furniture on the base rifle – another welcome configuration decision. The buttstock is a Magpul MOE

Fixed model, and it has a lot going on. The entire comb of the stock is wide and smoothly sloped offering generous cheek weld area. There’s a molded-in sling loop on the underside, but there are also four sockets – two on either side at the receiver and butt end where you can add push button QD attachment points. The butt pad is rubber and covers a hinged door, so there’s room in the stock to store important things like spare parts or bacon jerky for those long days in the field. All in all, it’s a nice stock, and I like the way it feels.

The front handguard is a Magpul MOE M-Lok

rifle-length model. It has six M-lock slots along the bottom and three on each side in the ten and two o’clock positions so that you can mount rail segments or any other M-Lock compatible accessories. The handguard mounts using the standard delta ring, so it’s not a free-floated system. The sides are smooth while the bottom has rounded ridges which help you set and maintain hand placement. There’s also a small ridge on the lower front which helps prevent your hand from sliding forward onto the gas block. Just forward of this ridge is a metal sling swivel so you can attach there or to one of the M-Lok points if you like. Sadly, there’s no bayonet lug, so if you buy this rifle, Senator Dianne Feinstein won’t shed quite as many tears, but that’s OK. I think bayonet charges are mostly a thing of the past anyway.