New from Glock: Optics-ready Glock 17 and 19 The big news from Glock this year is the release of two new optics-ready models. Last year, Glock introduced the G40 Gen4 MOS chambered in 10mm. That model was intended to be the ideal semiautomatic hunting pistol. With its 9.5-inch overall length, optics mount, and powerful 10mm chambering, it was welcomed by the hog hunting community among others.

10mm is a rockin’ caliber, and I love it, but I did wonder why the Glock folks didn’t start with their most popular models: the Glock 17 and 19. So I asked one of the Glock product folks. It involves extensive tinkering with the weight of the slide by removing metal, and re-adding optics of unknown weight presents some technical challenges with the careful balance of recoil operation, so the process took some extra engineering. 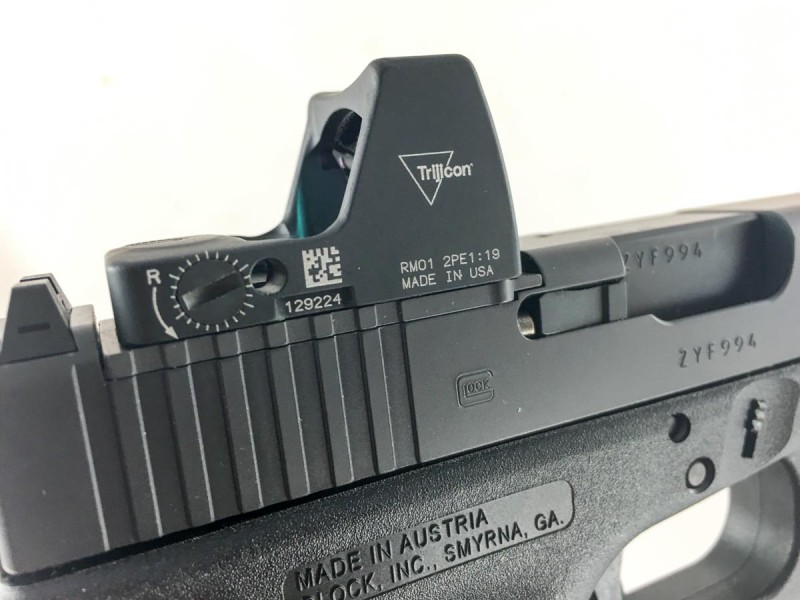 The new Glock 19 MOS with a Trijicon RMR installed.

Now, the company is releasing more Modular Optic System (MOS) models on the G17 and G19 Gen4 platforms. Both pistols feature the same slide cutouts and adapter plates that allow mounting of red dot optics directly to the slide.

Let’s take a closer look at the 9x19mm MOS models.

The cover plate is machined to match the slide down to the cocking serrations.

The MOS models come with a cover plate attached to the top of the slide with two Torx screws. This plate is machined to match the slide perfectly, including the slide serrations, so if you have the plate installed, you basically have a standard Glock Gen4 except for the seams.

Glock includes four different mounting plates with the MOS pistols along with extra screws and the appropriate Torx wrench. To install an optic, just remove the cover plate and cover plate screws and store them away. Next, choose one of the mounting plates to fit your optic of choice. The plates will handle optic from Docter, Meopta, Insight, Trijicon, C-More, and Leupold Deltapoint. Using the included shorter mounting plate screws, attach the right plate to the slide. Now, you can attach your optic to the plate using the mounting screws that (hopefully) come with your optic. 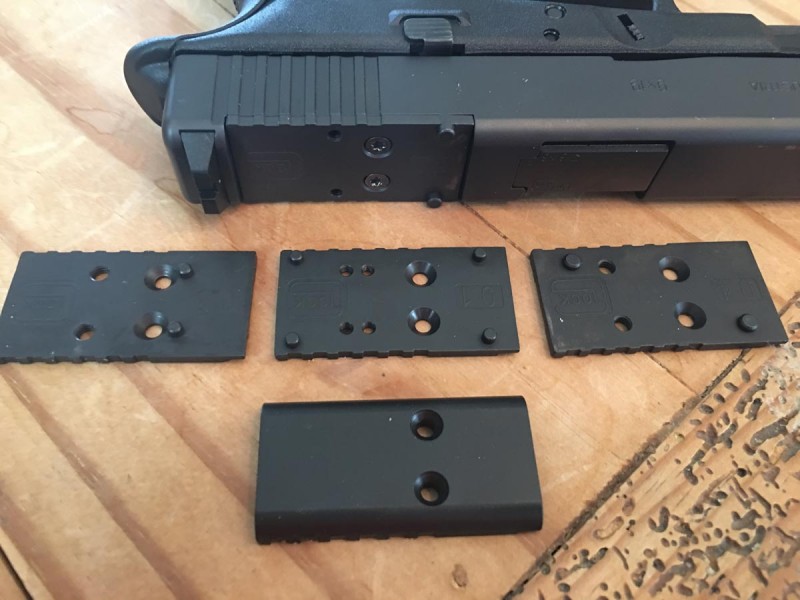 Four different mounting plates are in the box to fit a variety of optics.

I mounted a Trijicon RMR on both pistols and the process took only minutes. With the RMR, the standard sights on the MOS model were not visible through the RMR glass, so there was no co-witness capability without swapping out for taller sights. On the flip side, the view through the sight was uncluttered. If co-witnessing is a big deal for you, you might need to upgrade sights depending on which optic you use.

Can you carry them?

Having had these pistols for a bit, I was able to test out some different concealed carry options. I mounted a Trijicon RMR to both the Glock 17 and 19 MOS pistols. As far as pistol optics go, the RMR is among the smaller ones, so I figured it might be just peachy for concealed carry assuming that the configuration was holster-compatible. 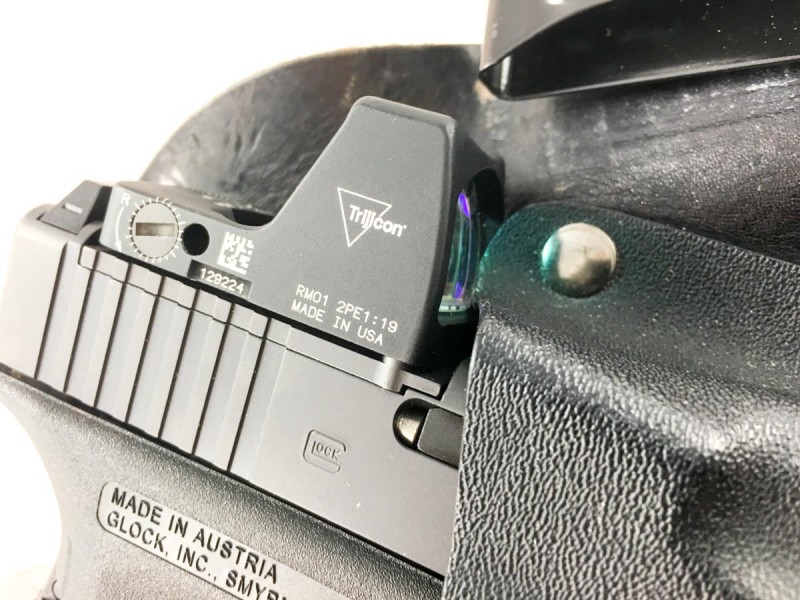 I dug into my bottomless box of holsters and pulled out four that I’ve used quite a bit for Glocks: a CrossBreed SuperTuck Deluxe IWB, an Andrews Custom Leather slide, a DeSantis SnapSlide, and a Milt Sparks Versamax 2. 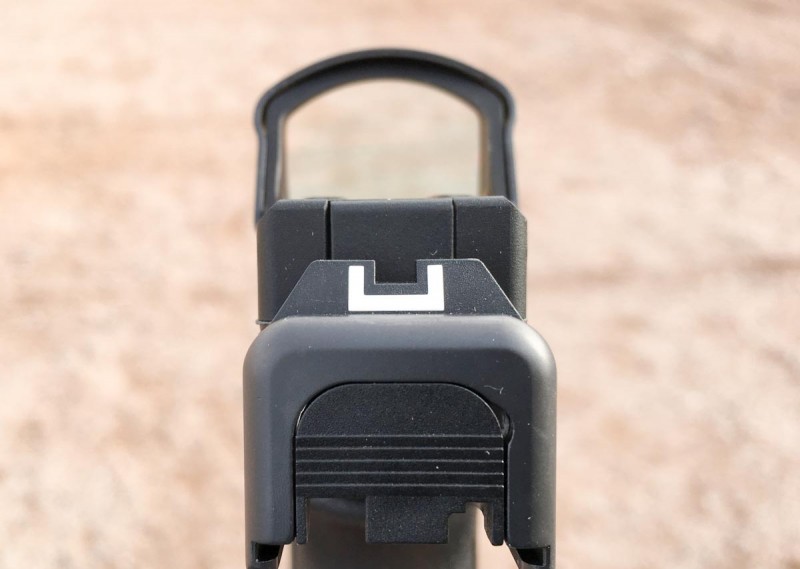 The Leupold is a little taller than the Trijicon RMR and won’t cowitness with the factory sights either.

Here’s the thing: the optics mount area is far enough back on the side so that the holster (usually) doesn’t interfere with the optic. Three out of the four holsters worked perfectly. On the VersaMax, the RMR did contact the belt loop area before the gun would fully seat in the holster. With a forward-cant holster, the top of the slide is angled down, so the RMR was under the slide and didn’t present any additional bulge. Nifty.

In other Glock news, the Glock Shooting Sports Foundation turns 25 this year.

One of the very first things I did several millennia ago when I was a much newer shooter was enter a Glock Shooting Sports Foundation (GSSF) match. Don’t me wrong, I was in no way, shape, or form ready to assault any of the podium positions, but from what I had been hearing, GSSF matches were a great way to put a toe in the water with competitive shooting. The courses of fire are straightforward. There are gazillions of helpful volunteers that are more than happy to give first-time competitors helpful tips, and matches take place all over the country so there’s likely one near you. Oh, and the best part? Glock gives away boatloads of free guns through the GSSF program, and not just to the winners.

This year marks the 25th birthday for the GSSF, but the original goal remains the same: to introduce new shooters to the shooting sports. Over the past 25 years, GSSF has counted over 200,000 match entries from 120,000 different competitors. That’s a lot of people.

Heck, just during this year, GSSF plans 55 new major outdoor matches. These generally go through a complete weekend, and since the match only takes a couple of hours to complete, you can shoot your course of fire at most any time during either of the two days. That’s just the outdoor programs. There’s a much broader indoor league that will host over 500 matches during 2016.

If you haven’t tried a GSSF match, I highly recommend it. You don’t need special gear or fancy shooting shirts. Heck, you don’t even have to shoot a Glock. The matches are designed to be low pressure and non-intimidating for newbies.

To view the 2016 match schedules and for more information on GSSF, visit www.gssfonline.com.